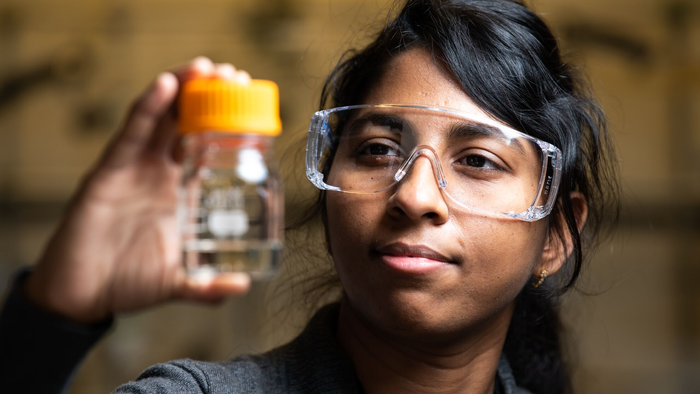 Capturing carbon dioxide may become more affordable and the atmosphere cleaner if scientists’ efforts to convert it into flammable methane using a new method can be harnessed on a large scale.

At the U.S. Department of Energy’s Pacific Northwest National Laboratory (PNNL), researchers have turned carbon dioxide (CO2) into methane, the primary component of natural gas, by using EEMPA, a solvent developed by PNNL.

Under this method, the normal process used to convert CO2 into methane is streamlined and the materials used to run the reaction and the energy needed to fuel it are reduced. A byproduct is a lower price for natural gas.

“Right now, a large fraction of the natural gas used in the U.S. has to be pumped out of the ground, and demand is expected to increase over time, even under climate change mitigation pathways. The methane produced by this process — made using waste CO2 and renewably sourced hydrogen — could offer an alternative for utilities and consumers looking for natural gas with a renewable component and a lower carbon footprint,” said PNN research chemist Jotheeswari Kothandaraman.

Methane occurs naturally in geologic deposits but can also be produced from renewable or recycled CO2 sources. It is a fuel itself or can be a hydrogen (H2) energy carrier. Methane, which has both industrial and residential applications, contributes to global warming.

Kothandaraman is a co-author of a paper that appeared in a recent edition of the journal ChemSusChem revealing that using EEMPA in power plants could slash carbon capture prices to 19 percent lower than standard industry costs. The study also shows that EEMPA use drives down the cost of natural gas.

Caused primarily by fossil fuel combustion and other human activities, CO2 exists in the atmosphere at levels today that are higher than at any point within the last 800,000 years, according to a federal government study. In 2019, they reached a high of 409.8 parts per million. Current concentrations exceed pre-industrial levels by 47 percent.

The new process requires an initial investment that costs 32 percent less than conventional methane conversion. Not only are operational costs cheaper, the selling price of synthetic natural gas drops by 12 percent.

Kothandaraman and the study’s co-authors examined the use of EEMPA in converting CO2 to methane by looking at the reaction’s molecular characteristics and then calculating the cost of running the process at scale in a 550-megawatt power plant. CO2 is captured at the power plant using special solvents on flue gas before it escapes from plant chimneys. Methane conversion is difficult when traditional solvents with a high-water content are used.

CO2 captured by EEMPA, the study’s authors found, resulted in further savings because CO2 could be converted to methane on site. When high water content solvents are used, CO2 is stripped and then sent off site for underground storage or conversion. With EEMPA, captured CO2 is mixed with renewable hydrogen and a catalyst, heated to just half the pressure used in conventional methods, and methane is made on site.

The study claimed this method converts more than 90 percent of captured CO2 to methane. EEMPA also captures over 95 percent of CO2 in flue gas and generates heat that produces steam for power generation. The ultimate greenhouse gas footprint, however, depends on what the methane is used to do.

The chemical process highlighted in the paper represents one path among many, said Kothandaraman, where captured CO2 can be used to produce other valuable chemicals.

“I’ll be glad when I can make this process work for methanol as efficiently as it does for methane now. That’s my long-term goal,” she said.

Methanol has more applications than methane. Over the last decade, Kothandaraman has worked on finding catalytic reactions that could produce methanol from CO2. Capturing it to create plastics is an area her team plans to explore.

“It’s important that we not only capture CO2 but find valuable ways to use it, and this study offers a cost-effective pathway toward making something valuable out of waste CO2,” said Ron Kent of SoCalGas.

Modern commercial technology can capture carbon at $58.30 per metric ton of CO2, according to the Department of Energy, and at a per-unit cost ranging from $400 million to $500 million. A PNNL study released in March determined that the use of EEMPA can absorb CO2 from flue gas and release it as pure CO2 for $47.10 per metric ton

«Previous Post
Relief At The Gas Pump Postponed»Next Post
DNA Can Be Left Behind Without A Touch, Complicating Forensics