New Afro-Descendant Municipality Emerges In Mexico Amid Invisibility And Discrimination

Afro-Mexicans account for 1.2 percent of the national population and live mainly in Guerrero, Oaxaca and Veracruz. 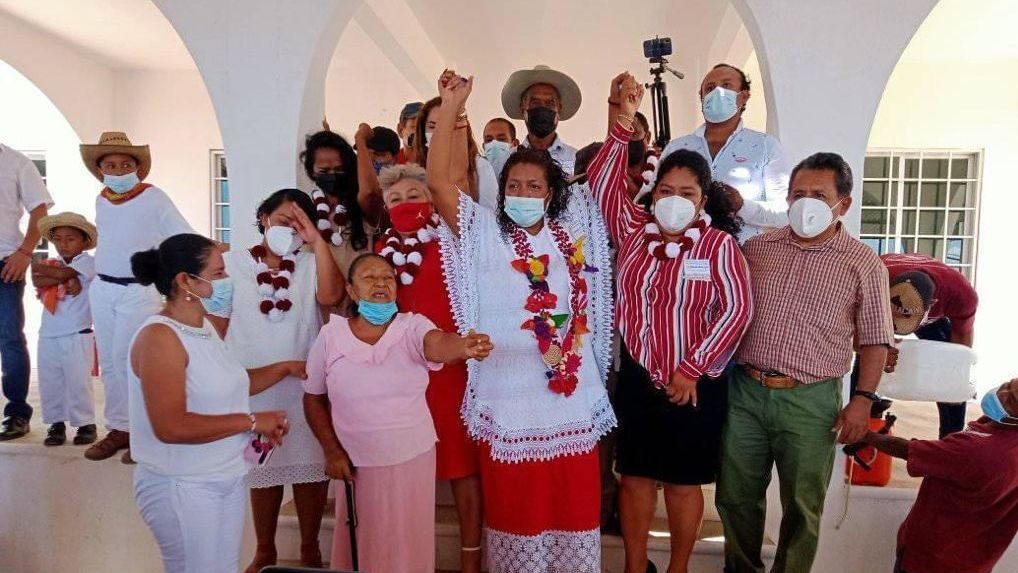 GUERRERO, MEXICO — July 31 was a historic day for the Mexican town of Huehuetán, Guerrero. After almost ten years of filing formal requests, it detached itself from the municipality of Azoyú to become part of a new self-proclaimed Afro-descendant municipality. Residents considered it a triumph, but Huehuetán still has challenges ahead.

Lack of resources and centuries of racial discrimination were among the causes that triggered the request, which the state congress never answered.

Leticia Javier Marín, Huehuetán’s new mayor, has enormous challenges ahead: building decent housing, a sewer system, and creating jobs are on her agenda, but she does not have the budget to take action.

Soon, new state legislators will take office, most of them belonging to her party, the National Regeneration Movement (Morena). Guerrero’s governor-elect Evelyn Salgado and Mexico’s President Andrés Manuel López Obrador are also members of Morena. Marín is confident that the party alignment will help the new Afro-descendant municipality operate as a legitimate entity.

“It is a historical event. It sets an example for many forgotten communities that are speaking out,” said Javier Marín, who was Morena’s candidate for mayor of Azoyú in the June 6 election, before the split. “The challenge is to become a legitimate entity. The next step will be to optimize the existing resources for our people to be vindicated of the opportunities they have been [historically] denied.”

Located on Guerrero’s so-called Costa Chica, on the eastern border of the Acapulco municipality, Huehuetán has a population of 4,132 Afro-descendants. Their ancestors were African slaves brought to Mexico during colonial times, from 1521 to 1810. The municipality’s primary economic activities are agriculture and livestock.

Since its foundation 200 years ago, Huehuetán has lived trapped between invisibility, lack of opportunities and shortcomings.

“When I was little, the teachers picked up the students at their homes [and walked them to school], but the adults would not let them go. They said, ‘no one can eat letters. There is the field; you have to produce corn,’” said Casiano García Jarquín, a 71-year-old painter and a local celebrity.

As a child, García Jarquín learned to read and write in first grade. He dropped out of school and resumed his education at age 19. His passion for painting led him to learn by himself and finally move to Acapulco in search of better opportunities. Years later, his work received national and international recognition.

Despite García Jarquín’s success, the educational gap between Afro-Mexicans and the rest of the country is large. Almost three times as many Afro-Mexicans do not know how to read and write, compared to the rest of the population, according to data from the 2015 intercensal survey, conducted by the National Institute of Statistics, Geography and Informatics in collaboration with the National Human Rights Commission.

At an early age, Afro-descendants often “migrate or drop out of school to start working. Hence, they occupy very poorly-paid positions. There is an illiteracy gap that is important to address,” said Mireya del Pino Pacheco, the Director of Studies and Public Policies at the National Council to Prevent Discrimination.

Many Afro-descendant communities are marginalized and hit by organized crime.

Guerrero has the most significant number of Afro-descendant municipalities in the country, with 81 recognized and 5 in the process of being recognized. But it is among Mexico’s ten most violent states.

“I had breakfast before going to school, but there were others who only drank water until they had lunch at noon. They had peppers with cheese and tortillas — that was their meal — or fried eggs with tortillas. If there was no cheese or eggs, they just had tortillas with pepper. But it was better than nothing,” said Huehuetán-born Marcelina Carmona Salas, who migrated to Baja California in search of a better life and encountered discrimination there.

People of African descent are usually stigmatized and face discrimination. Some “believe the skin color determines if someone is trustworthy or not, and see Afro-descendants as lazy, unreliable people,” said del Pino Pacheco, who explained that, in Mexico, discrimination against this community also takes the shape of sexualization. “Afro-descendant women are classified as being sexy and hot, and so are men.”

Afro-Mexicans account for 1.16 percent of the population, about 1.4 million people, and almost 600,000 inhabitants self-identify as multi-racial with Afro-Mexican heritage, according to the intercensal survey.

The states with the largest Afro-descendant communities are Guerrero at 6.5 percent of the population, Oaxaca at 4.9 percent and Veracruz at 3.3 percent.

The state of Guerrero received its name in honor of Vicente Guerrero, a key player in Mexico’s independence, the country’s second president and the first of Afro-descendant origin. Vicente Guerrero was born in Tixtla, Guerrero. His legacy includes the abolition of slavery, agrarian reform and free education. But 3 out of 10 Mexicans would not vote for an Afro-descendant person for president, according to the country’s most recent discrimination survey.

Mexico’s Afro-descendant population won constitutional recognition in 2019, when Congress amended article 2 of the Constitution to include the rights of Afro-Mexicans. Oaxaca, Veracruz and Mexico City’s state constitutions recognized their rights as well.

The 2015 intercensal survey included for the first time a question related to Afro-descendant people, while the 2020 census allowed respondents to self-identify as Afro-descendants.

However, for human rights activist Yndira Sandoval Sánchez much remains to be done, which is why she urges the absolute recognition of all Afro-Mexicans’ human rights. She suggested creating an autonomous human rights defender’s office because the recommendations of the current organizations “are not binding or are practically erased,” she said.

“Agencies in charge of protecting, promoting and defending human rights have weakened, not only in terms of bureaucratic personnel but also in budget and legal scope. … When a [segment of the] population lacks recognition, the whole Mexican democracy is called into question,” Sandoval Sánchez said.

She urged the revision of public policies aimed at eradicating gaps of inequality and discrimination, as well as those directed at detecting and preventing violence and supporting its victims.

“We are on a very reactive mode with issues such as the militarization [assigning marines and soldiers to tasks outside their original function], as well as others where the racial component has been ignored, including ethnocides,” she said.

“We have to review the economic, social, cultural and environmental rights, the entire Covenant on Civil and Political Rights, [to include] sexual, reproductive and digital rights. There is a big gap. The pandemic has exposed all the inequalities that communities generally face, especially in specific populations such as the Afro-Mexicans,” she said.

Meanwhile, almost a quarter of the Mexican population would not agree to have someone of a different race living in their homes, while 15 percent said that their rights had not been respected due to their skin color, according to the 2010 discrimination survey.