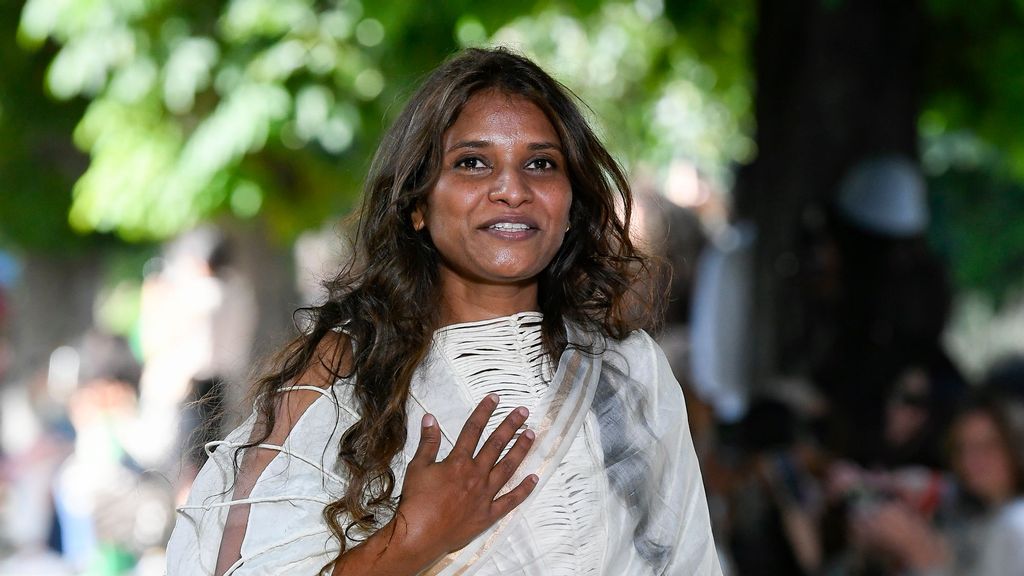 DELHI, India — The 17-year-old boarded a train alone, with a modest amount of money and a single bag of her bare essentials. She was fleeing the town of her birth. No one could say when she left or where she was headed.

And no one was eager to know. Not even when she didn’t return home. She had brought shame to the family by running away, and it would be years before she could return.

Deep down, she didn’t care: She was escaping gender discrimination at home and the inevitable fate of women in Vidisha, a nondescript town in central India. Arranged marriage at 18. Children at 20.

So instead of wrapping herself in a sari on a pre-arranged wedding day, Vaishali Shadangule dressed down. And she began designing what women in less oppressive places would wear. Paris Haute Couture Week in July was, at last, her coming-out party.

Despite a pandemic slowdown in global fashion, Paris runways saw models draped in Balenciaga and Gaultier — and Shadangule.

Her Autumn–Winter collection “Shwas” (which means “breath” in Sanskrit) had 30 haute couture garments in handwoven fabric with her signature cording, engineered deconstruction, and texturing.

The notoriously difficult Fédération de la Haute Couture et de la Mode in Paris didn’t care that she had already cut her teeth at New York Fashion Week. They grilled her in interviews and video conferences.

“There was tough competition from other international designers who were vying for the two slots reserved for guest designers,” said Shadangule. Today she lives in Mumbai, west coast city that’s the hub of India’s film and fashion fraternity.

“Luckily, they were looking for innovation, craftsmanship, and sustainability — everything that my brand stands for,” she said.

Sustainability and “circular” fashion are fashion buzzwords now, and the 43-year-old says she has been on board from the very beginning since “I come from a culture where everything is reused.”

“From random household items to old saris, nothing that could be repurposed was ever thrown away. And I have carried that legacy with me. Not a single thread is discarded carelessly in my factories. Leftover cloth is made into surface embellishments and textures for my garments, wall art, lampshades, and accessories.”

Shadangule trudged through her 20s as an office assistant, a gym instructor, and a nutritionist and put herself through fashion school in her 30s. She started her fashion experiments with Chanderi— the gossamer-fine handloom fabric her mother preferred for her saris.

“It was mesmerizing to see weavers raise beautiful patterns on 10,000 threads without any knowledge of geometry or math,” she said. Shadangule was hooked on textiles from the part of India she once escaped.

India has a rich textile tradition, and many advanced weaving and dyeing techniques have been around for centuries. And to date, the best-preserved reservoirs of these arts have remained in India’s villages.

Three million Indian households were engaged in handloom activities in 2020, according to a census completed by India’s Ministry of Textiles. About 72 percent of the weavers are women, and nearly nine in 10 live are in rural parts of the country.

Shadangule works with more than 900 “clusters” of these weavers, often staying at their homes to drink in the oral traditions that inspire what hits the runway. A few fabrics are near extinction. Only a few families in a southern Indian hamlet called Gulegudda still make one of them, called “Khun,“ despite its 4,000-year history.

“Women traditionally used Khun to fashion blouses for their Ilkal saris, but I knew this unique weave would lend itself beautifully to jackets and skirts and dresses,” said Shadangule, who started working with the weavers of Gulegudda and was soon sourcing the colorful, lightweight handloom for her garments.

The nature-inspired silhouettes and textures she showed during Paris Haute Couture Week also included Merino wool woven in Maheshwar, a town in central India, and indigenous weaves from the state of West Bengal.

Shadangule’s focus on sustainable indigenous fabrics wasn’t always fashionable. Jyoti Gwalani, one of her long-time clients, said the designer has had a 15-year head start.

“She was so different from everyone else at the time,” said Gwalani of her friend’s earliest efforts. “She was one of the few designers working with indigenous handloom weaves like Maheswari, and the way she used her creativity to merge great textile with the great design was remarkable.”

And in the face of tepid interest, she said, Shadangule “never changed her style.” she said. “If 100 people were picking up embroidered lehengas [skirt–blouse ensembles], she was happy with the 20 interested in her original pieces. For her, it was never about following trends but more of an inward journey.”

India’s fashion market is dominated by bridal wear, but that’s not Shadangule’s strength.

“In 2011, I showcased at the Fashion Design Council of India Fashion Week, but I did not get the kind of visibility or response I was looking for. My textiles and silhouettes were not glam enough; some even said they were meant for social workers! But this was my kind of fashion. I did not have a plan B,” she told Zenger.

She needed a Plan C after five years of falling short in the Indian market, so she took a few suitcases of garments to New York City in 2015 and tried her luck with exhibitions — sometimes in people’s homes.

“The response from the Americans was excellent. Far better than what I had received in India. I ended up showing at five consecutive seasons of New York Fashion Week,” Shadangule says today. Milan followed in 2016 and 2017. She had found her niche, taking Indian weaves to the international market.

“I have to sustain this momentum for a few more years. My dream is to see Indian textiles everywhere in the world, and this is just the start,” she said. Her Italian business partner Alessandro Giuliani, managing director of SDA Bocconi Asia Center, manages customer relations and marketing strategy.

“Vaishali is on a mission to revive the handloom treasures of India,” said Giuliani.

“She has deep knowledge about handwoven textiles and can transform them into modern silhouettes for the global client. After Paris, she was very well-appreciated by the international press. Still, we will be looking at more visibility in the International market.”

And, he said, he hopes to see her crack into that thorny world of Indian brides.