Archeologists found the cake covered by debris in a basement untouched since the house was destroyed in 1942. 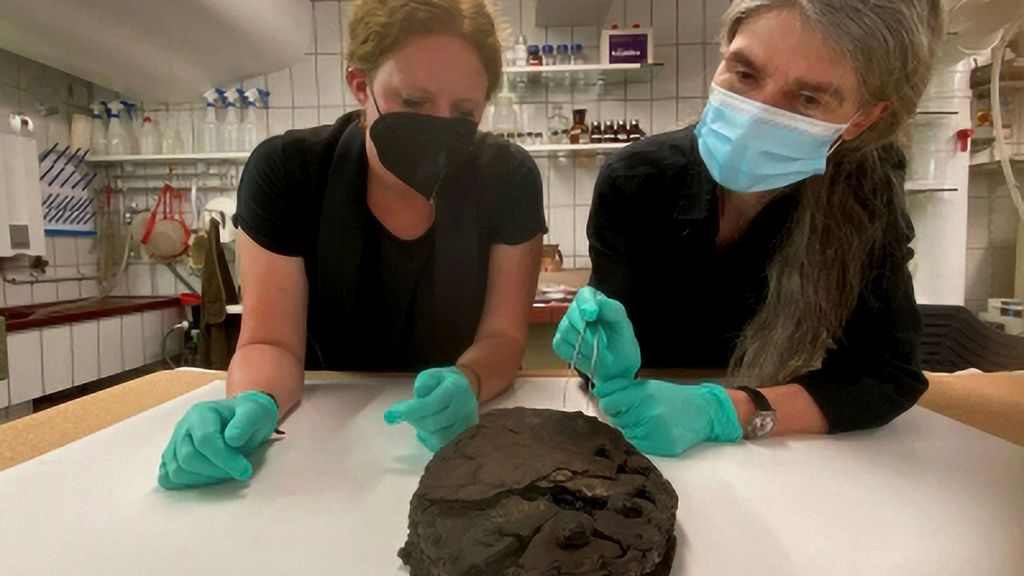 Lisa Renn (left) and Doris Muhrenberg inspect the nut cake buried amid debris after a German home was bombed by the Royal Air Force in 1942.  The cake, with its decorative coating, was found wrapped in wax paper. (Hansestadt Lübeck/Zenger)

It wasn’t even a fruitcake.

But archeologists did find a fossilized cake baked the day before Palm Sunday celebrations in 1942 in the kitchen of a German home flattened during a bombing raid by the Royal Air Force.

The 79-year-old nut cake, with a brittle coating or glaze, wrapped in wax paper, was found during excavations in August on the site of a building in Lübeck destroyed during World War II.

“Although it is heavily charred and blackened with soot on the outside, the heat has shrunk it to only a third of its original height,” stated Lisa Renn, local excavation manager.

In the basement of the home, where archeologists said the kitchen would have been, they also found an entire coffee service and good crockery, likely laid out for a Palm Sunday observance by a merchant named Johann Wärme, who owned the house.

“The discovery of the Lübecker torte represents a very private, almost intimate connection to the city’s day, which was so decisive in history,” a press release states.

When the bombs struck the historic city center on March 28, 1942, the first floor of the home fell into the basement and was covered by rubble until the recent excavation.

Archeological teams in Germany are often called upon to check sites before building work, although the local council in Lübeck did not comment when asked about the reason for this particular excavation.

Since it was found, the cake has been carefully examined by experts who confirmed it was finely decorated around the edges. “In order to get to the bottom of the secrets of the cake, samples of the filling and the glaze were examined in the laboratory,” said Dirk Rieger, head of the city’s archeology department.

The cake is the only pastry archeologically uncovered in northern Germany, archeologists said in their statement.

The archeologists also found a gramophone and several records, including those of Beethoven’s “Moonlight Sonata” and “Ninth Symphony,” stated Doris Mührenberg, who is in charge of an archeologic magazine that published the findings.

“It took 79 years for this special witnesses to the destruction of the city to come to light through this fragile material good,” said Reiger.

Once researchers have finished preparing the cake for preservation, it will be displayed at an unspecified museum.