These ferocious deep-sea killers like to select their own social network and form solid friendships — until they encounter man. 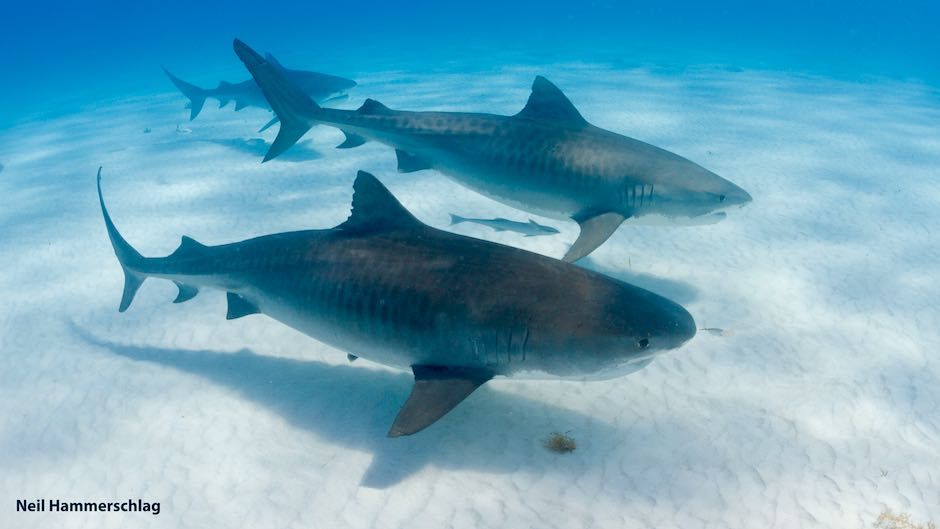 Tiger sharks in their natural environment off the coast of the Bahamas. Credit: Neil Hammerschlag, University of Miami.

Ferocious tiger sharks, once thought to be solitary and nomadic, are actually fairly social.

An international team of scientists has evaluated the behavior of tiger sharks (Galeocerdo cuvier) congregating near Tiger Beach by Little Bahama Bank in the Bahamas, where dive tourism companies host shark encounters for tourists, attracting hungry sharks with chum.

The team reported in a study published on Sept. 3 in the journal Frontiers in Marine Science that the tiger sharks had gathered for handouts from dive tourists and displayed an unprecedented preference for socializing with each other. The researchers determined that the handouts may disrupt the sharks’ social organization, but only temporarily, observing that they resumed their groupings outside the dive sites.

“Given that tiger sharks spend months at a time out in the open ocean as solitary predators, it’s amazing to me that they show social preferences for one another when they are [in] the Tiger Beach area,” said co-author Neil Hammerschlag, a leader in shark research who teaches at the University of Miami. “For nearly two decades, I have spent countless hours diving at Tiger Beach, always wondering if these apex predators interacted socially. Now we know.”

The feeding of sharks by dive tourism operators has sparked concern among experts and conservationists because of possible long-term effects on the predators. Chumming the sharks may, for example, change their natural foraging behavior.

“Tiger sharks are opportunistic, generalist predators. Food provisioning by dive operators is an opportunity to feed without expending the necessary energy or time to capture live prey,” Hammerschlag told Zenger.

Hammerschlag and his colleagues at the Institute of Zoology, Zoological Society of London, tagged and tracked the tiger sharks’ movements for three years. Using social network analysis, which maps and measures relationships between people, groups and other entities, they tracked data to evaluate whether the sharks grouped socially and whether this behavior differed according to where they were baited by shark dive tourism operators.

The team not only found that the sharks formed social groups but also discovered that the more they aggregated at dive tourism feeding sites, the more random their interactions became at those sites, suggesting a breakdown in social order.

“The boundary between wildlife and people is becoming increasingly thin, so as well as observing a new social behavior for the first time in what was once thought of as a solitary shark, we also measured the impacts of human activity on these predators’ interactions. [The sharks] seem to show some resilience to the bait feeding,” said co-author David Jacoby of the Zoological Society of London.

The social behavior of predators provides a tool for scientists and wildlife managers to understand how they live and form social groups and what roles they play in the ecosystem.