An expert from the Brookings Institute said the loss of the lithium would not have a big impact on Biden’s electric car policies. 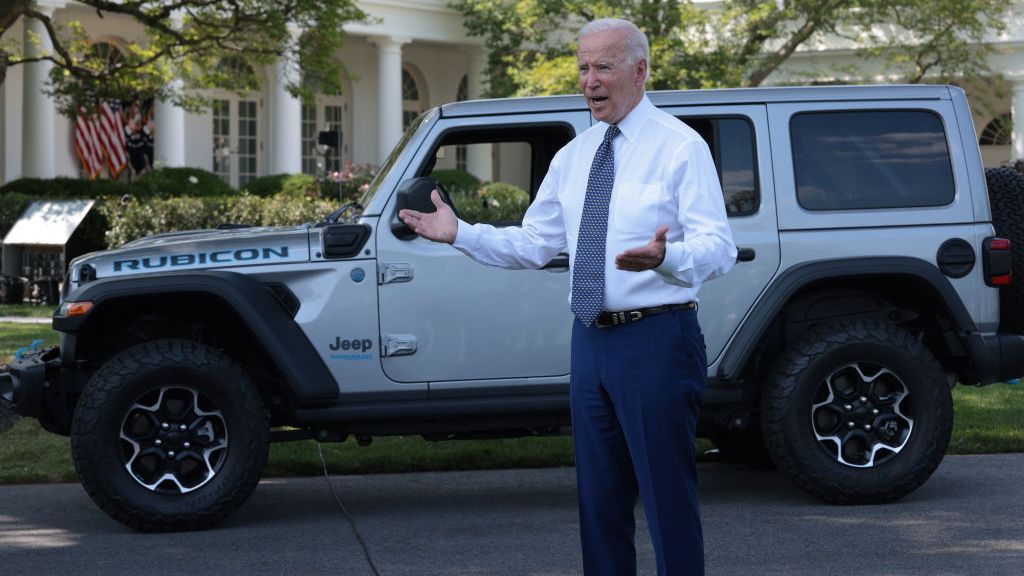 With Afghanistan now under Taliban control, an energy think tank has expressed concerns that natural resources from the “Saudi Arabia of lithium” could fall into the hands of China or Russia.

Lithium is an essential component of the batteries that power electric vehicles.

“To have Afghanistan’s minerals under Taliban control is a blow to American economic interests,” the Washington, D.C.-based Institute for Energy Research said in a statement.

Afghanistan’s unexplored mineral wealth is estimated to be valued between $1 trillion and $3 trillion, the Department of Defense said in a 2010 memo that described the country as the “Saudi Arabia of lithium.” The Taliban also already generates around $300 million annually by illegally tapping the country’s minerals, according to a 2018 report by Global Witness, a human rights organization.

While it is not known exactly how much lithium Afghanistan has, a 2017-2018 U.S. Geological Survey report noted that the country has large deposits of spodumene, a lithium-bearing mineral.

The lithium concerns come to the political surface as Congress considers a $1.2 trillion infrastructure bill that would allocate billions of dollars to install electric vehicle charging stations across the U.S.

The House is expected to vote on the White House-backed legislation, which passed in the Senate with bipartisan support in August, by Sept. 27. The legislation calls for $7.5 billion to create a national system of charging stations as well as funding for electric car subsidies. U.S. President Joseph R. Biden Jr. has signed an executive order setting a target for zero-emissions vehicles to make up at least half of all car sales in 2030.

“The future of the auto industry is electric,” Biden said while promoting his electric car plan during a May tour of Michigan’s Ford Rouge Electric Vehicle Center. “There’s no turning back.”

Democratic lawmakers are also pushing House Speaker Nancy Pelosi (D-Calif.) and Senate Majority Leader Chuck Schumer (D-N.Y.) to include several electric vehicle-related provisions to the final version of an upcoming $3.5 trillion budget bill, the framework for which has already been approved by both chambers of Congress.

Because lithium is essential for electric car batteries and battery storage, such technologies account for 30 percent of the global demand for the metal, which is expected to increase 40-fold by 2040, according to the International Energy Agency.

While Afghanistan’s lack of infrastructure — thanks to decades of war and instability — could prove to be challenging to Chinese and Russian efforts to extract resources, the two nations are retaining diplomatic staff in the region, and China is planning investments there as part of its Belt and Road Initiative.

China already produces 80 percent of the global output of raw materials for batteries and is the largest manufacturer of electric vehicle batteries. Any lithium from Afghanistan would allow it to increase its dominance of the battery supply chain.

The country houses 101 of the 136 lithium-ion battery plants in the pipeline to 2029, according to a 2019 report by Benchmark Mineral Intelligence, a London-based research firm for the lithium-ion battery industry, and its share of the electric vehicle battery market stands to increase if Chinese officials, who have already indicated a willingness to recognize a Taliban government, end up doing business with the organization.

“Despite the Taliban’s struggle to maintain basic public services and utilities in the cities that they have seized, the opportunity is there for China or Russia to capture some of the country’s mineral wealth,” the Institute for Energy Research said.

However, other areas of the world are also home to lithium, leading some energy experts to believe that electric vehicle progress in the U.S. won’t be hindered by troubled relations with Afghanistan’s new leaders.

“There are efforts underway to develop lithium deposits in many parts of the world,” Samantha Gross, fellow and director of the Brookings Institute’s Energy Security and Climate Initiative, told Zenger. “I would not expect the changes in Afghanistan to have any impact on U.S. electric vehicle goals.”

By the end of 2020, Chile contained 48.5 percent of the world’s known lithium reserves, followed by Australia at 28.4 percent and Argentina at 10 percent, according to the 2021 BP Statistical Review of World Energy. Although Australia and Chile account for approximately 40 and 20 percent, respectively, of global lithium production, it’s unlikely that they will remain the only lithium-production superpowers moving forward.

The U.S. houses the fifth largest lithium reserve in the world, making up about 4 percent of total reserves known last year. Additionally, two of the top-producing lithium companies, Albemarle and Livent, are based in the U.S., and the Vancouver-based Lithium Americas Corp. has asked the American government for permission to begin a lithium mining project in Nevada.

The availability of lithium elsewhere coupled with Afghanistan’s lack of developed roads, power plants and railways is unlikely to result in American lawmakers and officials being deterred from pursuing an increase in the use of electric vehicles at home, A.J. Gawthorpe, history and international studies professor at Leiden University in the Netherlands, said.

“People have been talking about Afghanistan’s vast mineral wealth for decades, as far back as the Soviets, but the country’s low level of security and development has prevented exploiting it, even at the height of the Western presence,” he said.

The Senate-passed infrastructure bill received the support of 19 Republicans in addition to every Democrat in the chamber, and the House version is also expected to gain enough favor for the legislation to make its way to the president’s desk despite concerns over Afghanistan’s fall.

“The Taliban takeover doesn’t really change the situation because I don’t think anyone was counting on those lithium deposits being exploited anytime soon anyway,” Gawthorpe said.

«Previous Post
Who Is Killing Journalists In Eastern Democratic Republic Of Congo?»Next Post
Relief At The Gas Pump Postponed