Award-Winning Game Has 165,888 Ways To Shape Star Of David 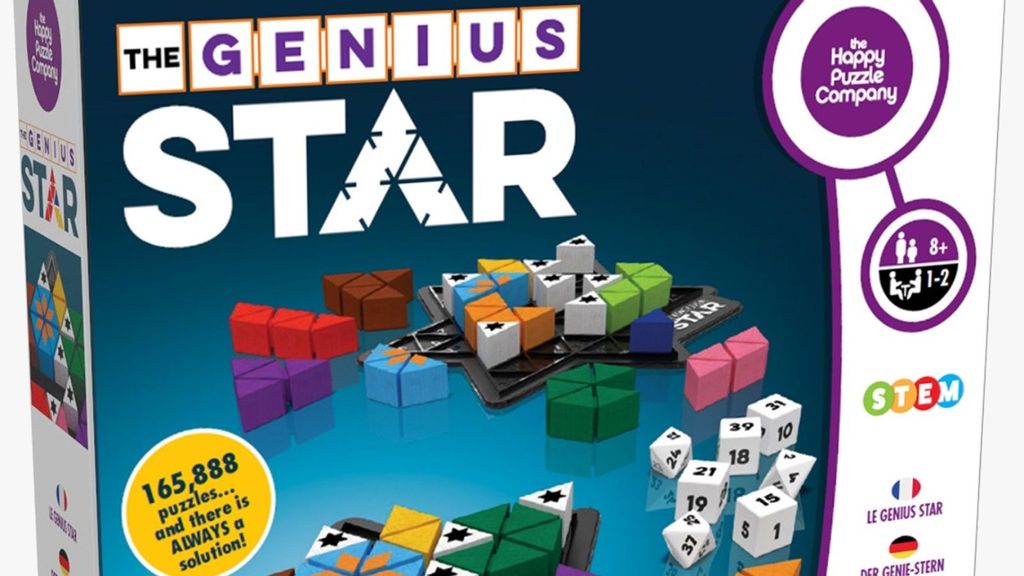 The Genius Star from The Happy Puzzle Company is an award-winner. (Courtesy of Aron Lazarus)

The Genius Star is an award-winning puzzle game where each player gets a six-pointed star-shaped board made up of 48 numbered triangles.

Players roll seven dice and place triangular pieces on the seven spaces determined by the dice. Then they race to use 11 colorful triangle combos to tessellate — or cover the game board — without gaps or overlaps.

Sometimes the task of finishing the star will seem easy and sometimes virtually impossible, but for each of the 165,888 possible dice combinations there is always at least one way to accomplish it.

“That’s the ‘genius’ element that people love about the game,” said its inventor, Aron Lazarus, who immigrated to Israel from London in 2006.

“People can’t get their head around the fact that there is always a solution. Well, it took me three months to devise the correct dice configuration that made that possible, and we even had a computer program written to test every single one of the 165,888 puzzles, to be absolutely certain that there are no mistakes.”

The Genius Star, named “Best Puzzle/ Brainteaser Game” by the American Specialty Toy Retailing Association in 2020, is available in 30 countries on five continents and became an Amazon Best Seller in the UK.

Lazarus invented it in his workshop in central Israel along with another logic game, Bee Genius, both released by The Happy Puzzle Company in 2020 to great acclaim.

The Genius Star shape is instantly recognizable as the Star of David featured in the center of the Israeli flag.

That the game board came out this way was a matter of serendipity, Lazarus said.

“I was working as head of international sales for The Happy Puzzle Company in the UK. We published a really clever game, The Genius Square, by an Algerian inventor. It was so well-received that the company wanted to publish a follow-up game,” Lazarus said.

He told the director of the company that he had some ideas. He put together prototypes of The Genius Star and Bee Genius; the company licensed them both, with the blessing of the original inventor.

“The Genius Square had 36 squares, so I needed to find another shape. For Bee Genius it was a honeycomb made of hexagons and for The Genius Star it was 48 equilateral triangles,” he said.

“I had personal connection with that shape as well. When I got married 16 years ago, our chuppah [wedding canopy] was made by a friend as a Star of David of 48 equilateral triangles. And here it happened to be the shape that worked best.”

Lazarus said he was always “obsessed with playing and designing games.” His current favorites are the board game Catan and the card game Dobble.

In his opinion, The Genius Star packs a lesson for these turbulent times.

“The game reminds us that, with all of our differences, and whatever our starting point, we can always work out a way to come together. It may not be simple, but as The Genius Star proves, there are at least 165,888 ways that the dice can fall to build the starting position to make a Star of David. Every way makes you a winner.”

He said he was not the only Israeli to win a TAGIE in 2020: Teenager Maayan Segal was named Young Inventor of the Year for her Queeng playing cards featuring multicultural monarchs of each gender with equal value.

As for Lazarus, he has more games on the drawing board, but for now he is keeping his cards close to the chest.

Award-winning Game Has 165,888 Ways To Shape Star Of David appeared first on Israel21C.