Who Is Killing Journalists In Eastern Democratic Republic Of Congo?

No arrests yet in the brutal killing of two journalists within a week in August. 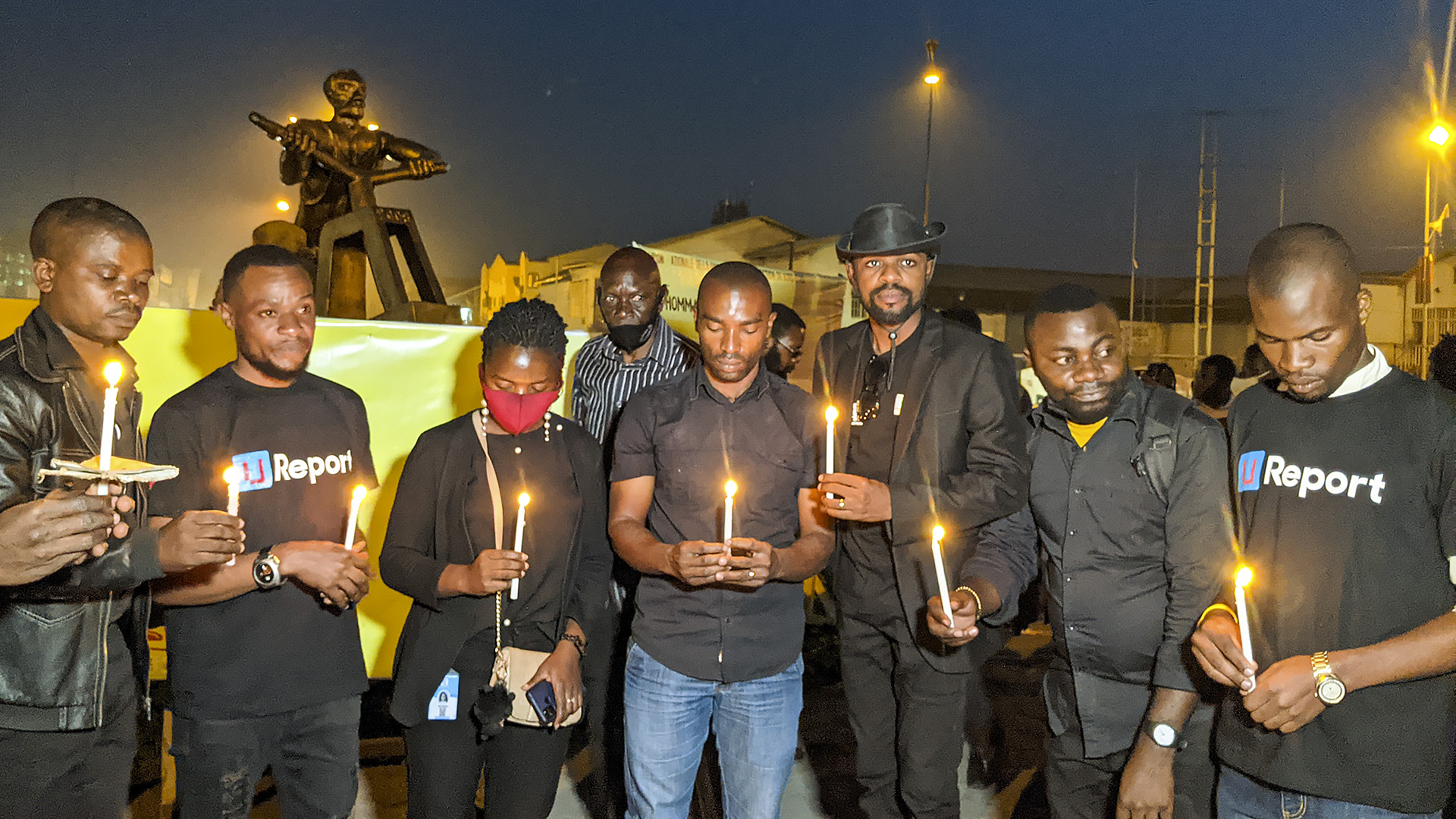 Dressed in black and holding candles, journalists and ordinary citizens gathered around the Chikudu roundabout in Goma city to remember the two journalists and speak out against the worsening state of press freedom in the country. (David Kasi)

The attackers killed him on the spot while his wife succumbed to her injuries a few days later. The rest of his family has gone into hiding since then.

Barely a week earlier, on Aug. 9, Héritier Ishara Magayane, a journalist with the state-run Radio-Television Nationale Congolaise, was knifed to death while walking to his home in Bunyangula village in Rutsuru territory in the restive North Kivu province.

The deaths alarmed the region’s media fraternity, which called for an end to attacks and threats to journalists during a candle-lit commemoration of the two journalists on Aug. 27.

“We light these candles tonight, first as a tribute to journalists we have lost, but also a symbol of hope for us who are still alive and pray for a free press,” Rosalie Masika Zawadi, the president of the National Union of Congo Press, said during the event.

Saint-Janvier Zihalirwa, the managing director of Shekinah radio and TV station in Goma, said: “If we continue to kill journalists, then we want to put an end to the information.”

“We cannot accept this. We want the local and international community to know what is happening here. We want journalists to do their work in freedom and move around informing the public without fearing for their lives,” he said.

Dressed in black and holding candles, journalists and ordinary citizens gathered around the Chikudu roundabout in Goma city to remember the two journalists and speak out against the country’s worsening state of press freedom.

Despite numerous threats, the two are the first to be killed in 2021.

Magayane’s colleagues remembered him as a cheerful, courteous person.

“On the evening of the day he died, he hosted a radio program, with his selection of good music, which many listeners loved,” Augustin Serugundo, a colleague at the Rutsuru sub-station of the radio station where they worked.

No arrests have been made so far in connection with the deaths. However, the attacks against them highlight the deteriorating security situation in North Kivu and Ituri provinces.

In May, President Felix Tshisekedi declared a state of emergency in the two provinces and replaced civilian authorities with military officials.

The move was to curb violence that has rocked the region for years, which authorities attribute to the Allied Democratic Forces, a militant group that has pledged allegiance to the Islamic State.

However, this has done little to change the security situation in the region as armed groups prowl the towns and villages of the two provinces, killing and maiming.

Journalists have been caught up in the clash between marauding militiamen and strong-armed security officials.

Ituri’s provincial police commissioner Ngoy Sengelwa Kyo blamed Mumbere’s death on the Mai-Mai—community-based militias formed to defend their local territories against other armed groups, such as the Congolese military and rebel groups.

Indeed, in January, the group threatened Jacques Mulengwa, the director of Raka FM, a community radio station in Kazimia in South Kivu, according to a report by Reporters Without Borders, which champions the rights of journalists.

However, before his death, Mumbere had accused military officials of threatening and intimidating him over a broadcast he aired in March, according to a report by the Committee to Protect Journalists.

“That broadcast, which Committee to Protect Journalist reviewed, included an audio clip from a local human rights activist alleging that a senior military officer had overseen the detention and torture of adults and children in an underground dungeon at a military camp in the province,” said the organization.

In his inaugural address in January 2019, Tshisekedi said he wanted to turn the media into a “real fourth estate,” but attacks against journalists go on unabated under his watch.

Journalist In Danger, a local media rights organization, called on Prime Minister Jean-Michel Sama Lukonde to form an impartial commission of inquiry into the killings.

“Our organization firmly believes that the establishment of a joint independent commission of inquiry made up of representatives of the government and the profession will not only elucidate the circumstances of the murders of journalists,” said the organization in a press release on Aug. 17.

The organization’s representative in North Kivu, Tuver Wundi, said the government should look more into the safety of media professionals who have become targets of rebels in the provinces.

“This year, attacks on members of the press have become more and more alarming in various territories of the province of North Kivu,” Wundi told Zenger News.

“We ask for the authorities to conduct serious investigations into these assassinations because killing a journalist after several threats is crossing the red line. [This] will also send a strong signal from your government to reassure media professionals increasingly worried about their safety.”