This Wood Flooring Generates Energy By Being Walked On

Spruce optimized with silicone and nanocrystals create a nanogenerator. 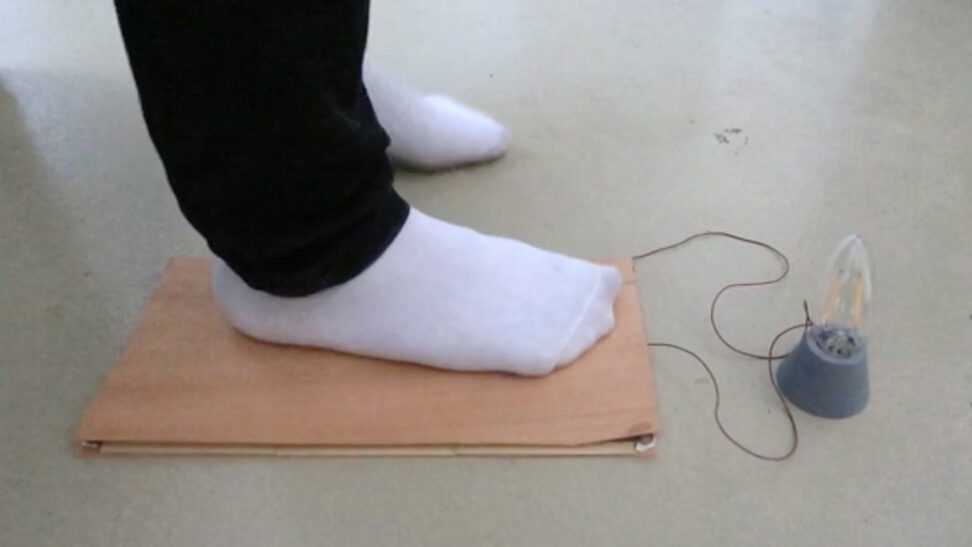 Wood flooring could soon become a source of renewable energy, according to researchers who have found a way to turn foot traffic into electricity.

Swiss scientists have developed a nanogenerator — a tiny device that can convert mechanical energy into electricity. In combination with specially formulated wood, they can generate practical power.

The wood flooring is coated with silicone and embedded with nanocrystals. Walking on it releases enough energy to power a small electronic device like a pocket calculator.

One prototype with a surface area slightly smaller than a letter-sized piece of paper successfully lit up a light bulb, turning footsteps into electricity, when a person walked on it.

The system, described this month in a paper published in the science journal Matter, is based on a scientific oddity called the triboelectric effect — the phenomenon that makes a sock cling to other laundry because of an electrical charge. Electrons jumping from one object to another generate tiny amounts of electricity.

The researchers found that wood performs poorly for static cling, so it needs some help.

“Wood is basically triboneutral,” said Guido Panzarasa, the paper’s chief author, who teaches at the Swiss Federal Institute of Technology in Zürich. “It means that wood has no real tendency to acquire or to lose electrons.” This limits the material’s ability to generate electricity, he said, “so the challenge is making wood that is able to attract and lose electrons.”

Panzarasa said his long-term goal is to produce “wood with new properties for future sustainable smart buildings.” His team wants to improve their nanogenerator with environmentally friendly coatings that are easier to apply.

“Even though we initially focused on basic research, eventually, the research we do should lead to applications in the real world,” he said.

Panzarasa and his colleagues coated one wood sample a kind of silicone that attracts electrons on contact. They grew nanocrystals on another wood sample — which tend to lose electrons. Put them together, and the current moves. The researchers found radially cut spruce provided the best physical specimen to attach the coating, and produced 80 times as much electricity as ordinary wood.

“Our focus was to demonstrate the possibility of modifying wood with relatively environmentally friendly procedures to make it triboelectric,” said Panzarasa. “Spruce is cheap and available and has favorable mechanical properties. … [I]t can be scalable on an industrial level. It’s only a matter of engineering.”

The new nanogenerator preserves the mechanical robustness and warm colors of the wood while remaining efficient, sustainable and scalable, Panzarasa’s team wrote. It may also absorb carbon dioxide from the environment during the material’s useful life, canceling out its contribution to climate change.