Popcorn With Zenger: ‘Shang-Chi And The Legend Of The Ten Rings’ Is A Bland Addition To The MCU

After a beautiful opening sequence, the film just goes downhill. 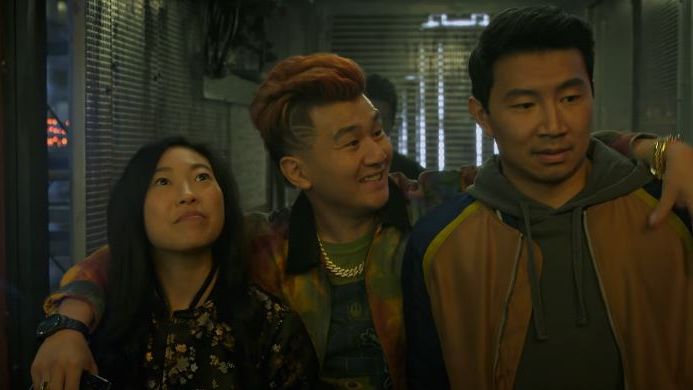 Shang-Chi (Simu Liu, right) and his friends attempt to catch up with his past before it finds him. (Marvel Studios)

Despite releasing a film called “Avengers: Endgame” just two years ago, Marvel has no plans to stop its billion-dollar cinematic universe, for better or worse.

A lot has been made of Disney’s latest Marvel Cinematic Universe film “Shang-Chi and the Legend of the Ten Rings”, and the runaway narrative has been about the achievement of Asian representation in the film. Marvel’s first Asian superhero has created a lot of excitement among critics, but the elephant in the room regarding the MCU remains unaddressed.

The grand finale of a 10-year superhero saga is already in the books, so what is there to keep audiences interested in coming back for more? With all of its heavy hitters either retired from their roles or no longer with us, Marvel now has to rely on fresh, unknown characters in order to keep the wheels turning on its longest-running cinematic soap opera. No name is more unknown than Shang-Chi, a superhero who was originally introduced in 1973 but was never a mainstream name until today.

Hoping to catch lightning in a bottle as it did with heroes such as Star-Lord, Marvel brings Shang-Chi to the big dance but makes its title character a footnote in his own film.

The Story: “Shang-Chi and the Legend of the Ten Rings” begins as a story about a man named Xu Wenwu (Tony Leung) who has spent more than a thousand years using the ancient Ten Rings to obtain power and money. One day Wenwu meets his match in a woman named Jiang Li (Fala Chen), who is the guardian of Ta Lo. Wenwu marries Jiang Li and has two children — one of them is Shang-Chi (Simu Liu).

Shang lives in San Francisco as a valet driver living a normal life with his good friend Katy (Awkwafina), but when assassins from his father’s organization attempt to steal his pennant, Shang is forced to expose his past as a deadly trained killer. Shang must reconnect with his estranged sister in order to figure out why their father demands their presence and what bigger plans Wenwu has in store for his kids.

Bright Spots: Like most MCU films, there are aspects of “Shang-Chi” that are brilliantly done but just not emphasized enough. The opening sequence narrates the origin story of our main character and makes the film feel more like a traditional Chinese martial arts-meets-fantasy film than a Disney-produced project.

Leung carries the story as a complex character who toes the line between hero and villain while remaining a sympathetic figure. Ben Kingsley as Trevor Slattery is a good addition to the film as Marvel attempts to clean up the mess created in “Iron Man 3” where it botched the origin story of ‘The Mandarin’, a key figure in the history of the Ten Rings.

The set pieces in “Shang-Chi” are one of the film’s biggest strengths. Filmed mostly in Australia, “Shang-Chi” is able to replicate the atmospheres of both mainland and mystic China. With the assistance of some expensive CGI, “Shang-Chi” is visually strong enough to stand out in a long catalog of Marvel films, but some downfalls that exist in every other Marvel film are very much present here.

Weak Spots: The biggest problem with the MCU is how ridiculously formulaic it is. You might be watching a film starring a different hero, but the format never changes. Much like every other MCU film, “Shang-Chi” is littered with humorless, scene-killing comedy played for cheap laughs. After a beautiful opening sequence that sets the tone for a story that mixes elements of fantasy and romance, we are dumped into a modern timeline full of comedy bits not worthy of a modern “Saturday Night Live” sketch.

Shang-Chi fights a city bus full of baddies just to be interrupted by a narcissistic “adult” live-streaming the event on social media … you are supposed to laugh. Shang-Chi explains the backstory of his broken family and why it fell apart, only to be interrupted by a waitress asking him if he wants veggie or beef, and veggie isn’t on the menu.

This happens a lot.

Awkwafina is in the film solely for comic relief. The character spends most of the film just hanging around the story with no clear purpose. She has no romantic ties to anybody — she can’t fight like the rest of the cast can — and it takes nearly two hours to make her feel useful in the context of the story. Liu is a rather bland lead for a Marvel superhero film as nearly every other character except Katy is more exciting than he is.

The film drags on like a wounded animal right before the final act. Because it’s a Marvel superhero film, we have to get our giant CGI monster fight that keeps casual fans happy enough to make them believe their $15 was money well spent.

The Takeaway: Disney simply refuses to take any chances with the Marvel Cinematic Universe. Its films’ ‘representation’ may vary, but the end result is exactly the same — audiences are left with a film that isn’t good enough to be great and isn’t bad enough to be terrible. “Shang-Chi and the Legend of the Ten Rings” is Marvel’s 25th consecutive film that is just as mediocre as most of the others.

See or Skip: If you have seen one MCU film, you have seen them all, and “Shang-Chi and the Legend of the Ten Rings” is no different from the rest.