Residue inside the 9,000-year-old pots reveals evidence of a rudimentary rice beer. 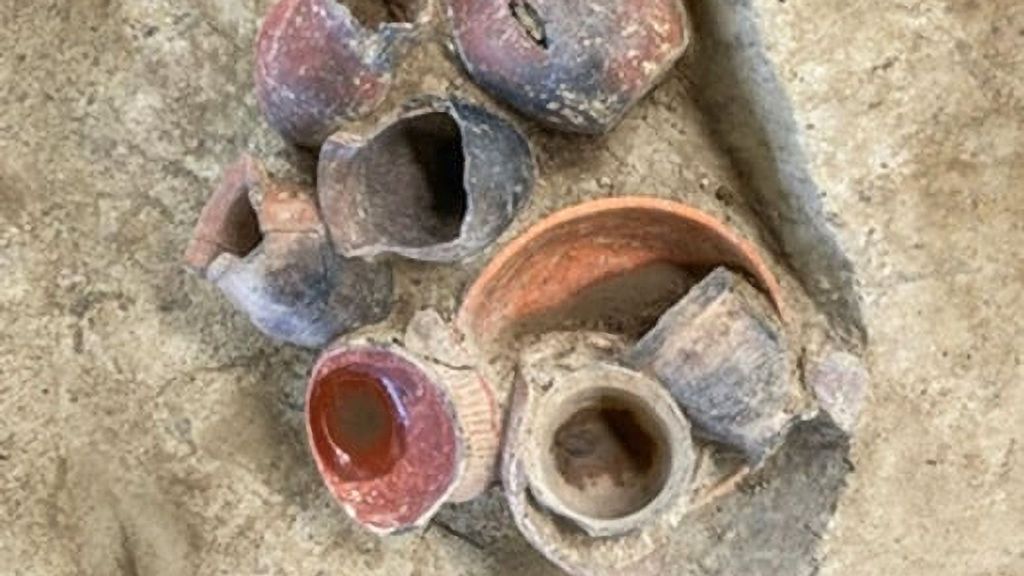 Archaeologists found cups, bowls and pear-shaped vessels similar to bronze “hu” pots at a burial site in southern China. They say residues on the pottery indicate the attendees at the funeral 9,000 years ago were drinking beer. (Leping Jiang/Zenger)

An archeologist at Dartmouth College, a school so infamous for its alcohol culture that it inspired the movie “Animal House,” has uncovered one of the oldest beer-drinking sites in the world.

Working in China, Jiajing Wang and her colleagues determined that the tradition of hoisting alcoholic beverages at important gatherings is at least 9,000 years old. That’s the age of two earthenware bowls and six pear-shaped pottery vessels uncovered at a burial site in Qiaotou, Zhejiang province — coated with residues from rudimentary beer.

The ancient recipe appears to be fermented from rice, pearl barley and tubers — a category that today includes potatoes, yams and jicama. The beer-glazed vessels were among 20 found inside a burial pit with two skeletons. That context, researchers determined, “suggest that beer drinking was critical for funerary rituals.”

Rice cultivation in China was still in its early stages in 7,000 B.C., and the grain was in short supply, they wrote. That suggests a significant cost to brewing the beer, something people would do only for a significant occasion or to honor someone important.

Their study was published Aug. 12 in PLOS ONE, a journal of the Public Library of Science.

“The beer at Qiaotou was likely served in rituals to commemorate the burial of the dead. Ritualized drinking probably played an integrative role in maintaining social relationships, paving the way for the rise of complex farming societies four millennia later,” Wang and her team wrote.

Some of the pots, the authors wrote, are among “the earliest known painted pottery in the world.” They were designed to be held in one hand like a cup. The long-necked pottery, similar to bronze vessels known as Hu pots, were traditionally used for storing and pouring alcohol.

Researchers analyzed starches, fungi and fossilized residues from plants to determine what went into the brew and how it was fermented.

“Through a residue analysis of pots from Qiaotou, our results revealed that the pottery vessels were used to hold beer, in its most general sense,” said Wang.

“This ancient beer, though, would not have been like the IPA [India Pale Ale] that we have today,” she said. “Instead, it was likely a slightly fermented and sweet beverage, which was probably cloudy in color.”

The analysis suggests that rice husks and other plants were added as fermentation agents.

Wang said in a statement issued by Dartmouth College that it’s unclear how or why the Chinese from this region began fermenting rice into beer—or whether it was just a happy accident.