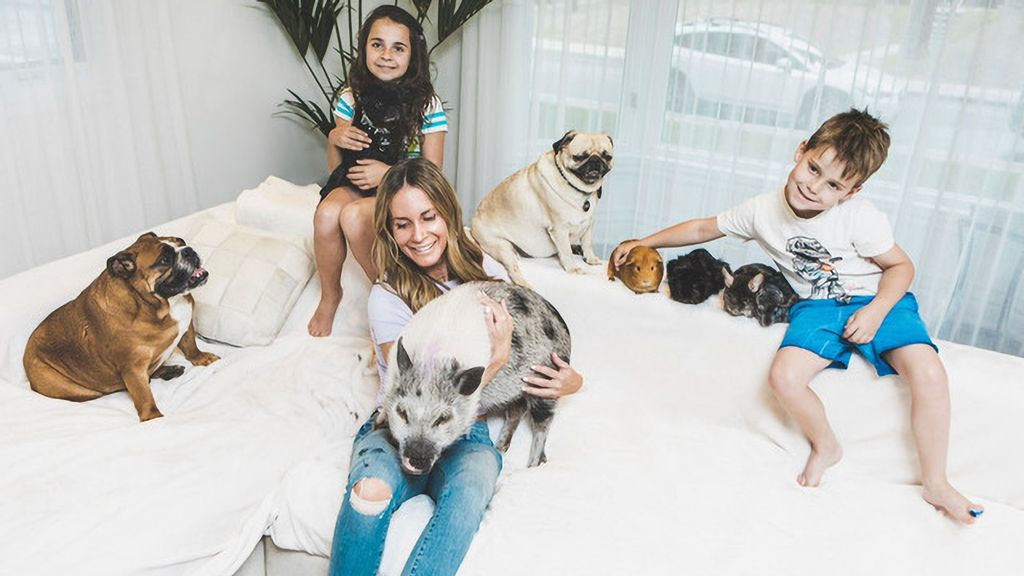 Melissa Cristofaro Trihey with her children and a few of their 14 pets, at home in Montreal, Canada. (@furballsinc/Zenger)

Take a bunch of cute animals, dress them up with silly accessories, and you’ve got yourself a viral hit.

That’s what the Crostofaro Trihey family in Montreal, Canada, has done with their 14 pets.

Melissa Cristofaro Trihey and her two children have become an online sensation with their Furballs Instagram page that features ducks, guinea pigs, pigs, a rabbit, a chimp and dogs all dressed up and posed on toy cars, sleighs, trucks and other props.

They’re also featured on the the Furballs Inc. website, which shares their love for nature and pets.

Trihey said the endeavor was just family fun until one of their videos went viral. Their Instagram page has 208,000 followers, and their menagerie has been featured on “ABC News” and “NBC Today,” among other media platforms.

Trihey, who owns a home-goods import business, is also the property manager for her family’s real-estate portfolio. She said the Instagram account is not about getting rich. Rather, it’s about showing people that letting children have animals can teach compassion, kindness and responsibility.

“I grew up with lots of pets — not as many as I have now — but when I had children of my own, I really realized the importance of raising children with a strong connection to nature and animals,” she said.

“I have always made sure my children were physically learning in nature. When they were babies, I would take them to the farm twice a week. I encouraged them to get their hands and feet dirty in the earth. I know that having my kids grow up with our unique furball family, has helped them flourish into the empathetic, patient and responsible members of society they have grown to be.”

She said having 14 animals can be challenging at times, including some of the animal’s peculiar habits, such as the pig eating the children’s homework.

But she sees time spent with her extended family as valuable.

The amusing videos began as a natural extension of her kids playing with their pets.

“Furballsinc and the guinea pigs’ rise to stardom driving around in motorized vehicles started when my children, Ella and Chase, were snapping pictures of them posed in Chase’s toy cars,” she said.

“I instantly realized this was something we must share with people. Together, as a family, we began a joint Instagram account to share our funny, staged pictures and skits of our many pets, with [guinea pigs] Bingo and Buster being the main attraction in their motorized vehicles.”

Ella had been asking for months for a hamster for her birthday, and when the day arrived, she went with her mother to the pet shop. “There were no hamsters,” but low and behold, Bingo and Buster caught her eye,” said Trihey. “We couldn’t separate them, so they both came home with us, along with a carload full of toys.

“They are the sweetest little guys. They sing when I open the fridge, hoping they will get some fresh veggies, and love hanging with the kids while they play.”

Trihey said Bingo loves being the star of the show.

“He loves posing for pictures and videos, and Buster comes along for the ride, as long as he has Bingo by his side. They are very adventurous guinea pigs; they get to see a lot and have a pretty extensive car, boat and sports collection.”

At the end of the day, she said, it’s really about having fun.

“Everyone is a winner in my house, and no one competes against each other. It’s all for fun. So no matter who wins the race, they both get something delicious.”