VIDEO: Eye Robot: Human Emotions Can Be Triggered By Glances From Robots

A humanoid robot can give people ‘brain freeze’ when they look at its face for social signals, says study. 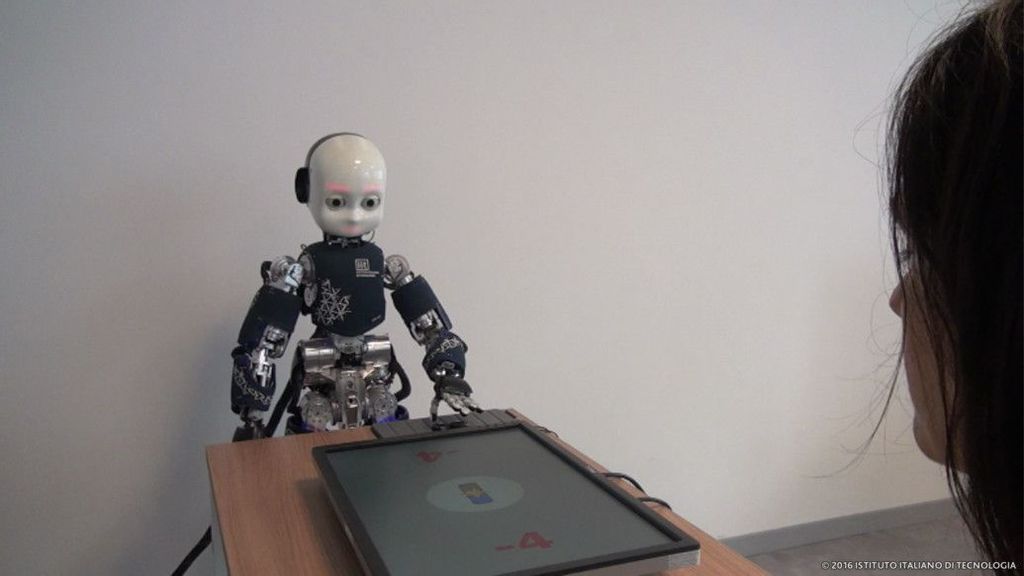 Research subjects engaged the iCub humanoid robot in a competitive game, and their decisions were delayed when meeting the robot's gaze. (Istituto Italiano di Tecnologia)

If you envision a day when a version of Rosie, the robotic maid from “The Jetsons” gives you what you take to be a loving gaze when serving coffee, be prepared to have an emotional reaction yourself.

In a study published in Science Robotics and conducted by the Istituto Italiano di Tecnologia (IIT), the authors observed that when humanoid robots and humans gaze at each other, a person’s neural activity is affected.

The researchers said they believe their findings may help in the design of robots that behave in the way most appropriate for the context in which they are used. Robots exhibiting human-like social behaviors, they suggest, may assist in caring for children and the elderly, as is the case of the iCub robot, which is being used as part of experimental therapy in the treatment of autism.

However, a robot with social skills might be distracting in other settings, such as working alongside humans on the assembly line or in the air traffic control tower, the study’s findings suggested.

As for a robot’s gaze, it is perceived by humans as a social signal, according to the study’s authors, and thus has implications when humanoid robots engage as coworkers, domestic assistants or in clinical support of humans.

The IIT study seeks to know under what conditions people will see humanoid robots as intentional beings and whether people refer to mental states such as beliefs and desires in order to explain and interpret robots’ behavior. The study is part of a project called “InStance,” which is funded by the European Research Council.

The human brain reacts very strongly when aware that another person is looking or is directly gazing at a certain event or location in the environment.

The researchers had 40 participants play what was called the “Chicken” game with the iCub robot, measuring the participants’ behavior and neural activity. The game depicts a situation in which two drivers of simulated cars move toward each other on a collision course and the outcome depends on whether the players yield or keep going straight.

Participants were slower to respond when iCub established a mutual gaze during the moment of decision, relative to averted gaze. This may suggest that a mutual gaze entailed a higher cognitive effort.

“Think of playing poker with a robot. If the robot looks at you during the moment you need to make a decision on the next move, you will have a more difficult time in making a decision, relative to a situation when the robot gazes away. Your brain will also need to employ effortful and costly processes to try to ‘ignore’ that gaze of the robot,” said Wykowska.

It may be that the robot’s gaze “hijacks” humans’ “socio-cognitive” mechanisms, causing the brain to respond as if the robot were a social agent. Therefore, being social with a robot may not be beneficial for humans, interfering with their performance and speed of decision-making, even if they enjoy the exchange.