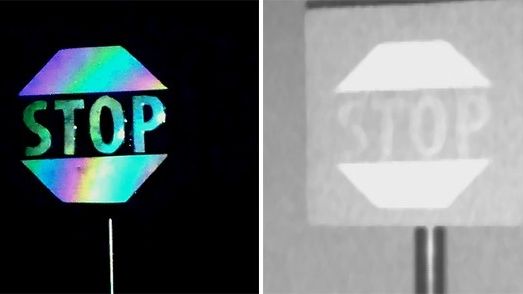 “Smart traffic signs made from our material could provide more signals for future systems that use LIDAR [laser imaging, detection and ranging technology] and visible pattern recognition together to identify important traffic signs. This may be helpful to improve the traffic safety for autonomous cars,” said Qiaoqiang Gan, a professor of electrical engineering at the University at Buffalo.

“It is vital to be able to explain how a technology works to someone before you attempt to adopt it. Our new paper defines how light interacts with microscale concave interfaces,” said Gan. “Currently, autopilot systems face many challenges in recognizing traffic signs, especially in real-world conditions. Smart traffic signs made from our material could provide more signals for future systems that use LIDAR and visible pattern recognition together to identify important traffic signs. This may be helpful to improve the traffic safety for autonomous cars.”

The authors of the study, recently published in Applied Materials Today, focused on a thin film of retroreflective material consisting of polymer microspheres laid down on the sticky side of a transparent tape. Partially embedded in tape, the protruding parts of microspheres form MCIs.&ZeroWidthSpace;

White light shining on the film can cause light to reflect concentric rainbow-hued rings. But when shining a laser of a single color (blue, green or red in this study), a pattern of bright and dark rings is generated. Infrared lasers, when shone on the film, also generate distinctive signals of concentric rings.

“We demonstrated a new combined strategy to enhance the LIDAR signal and visible pattern recognition that are currently performed by both visible and infrared cameras,” said researcher and co-author Jacob Rada of the University of Buffalo. “Our work showed that the MCI is an ideal target for LIDAR cameras, due to the constantly strong signals that are produced.”

While the autonomous vehicle market is still mainly in the experimental phase, it is expected to start making its presence felt on roadways in the not-too-distant future. “Autonomous vehicles, able to operate without a driver, may be commercially available and legal to use in some jurisdictions by the late 2020s, but will initially have high costs and limited performance,” notes a recent report by the Victoria Transport Policy Institute.