With California Recall All But Tied, Unlimited Dollars For Newsom, Turnout Expected To Sway Outcome

Californians go to the polls Sept. 14 to decide whether to oust first-term Gov. Gavin Newsom a year before he faces re-election. 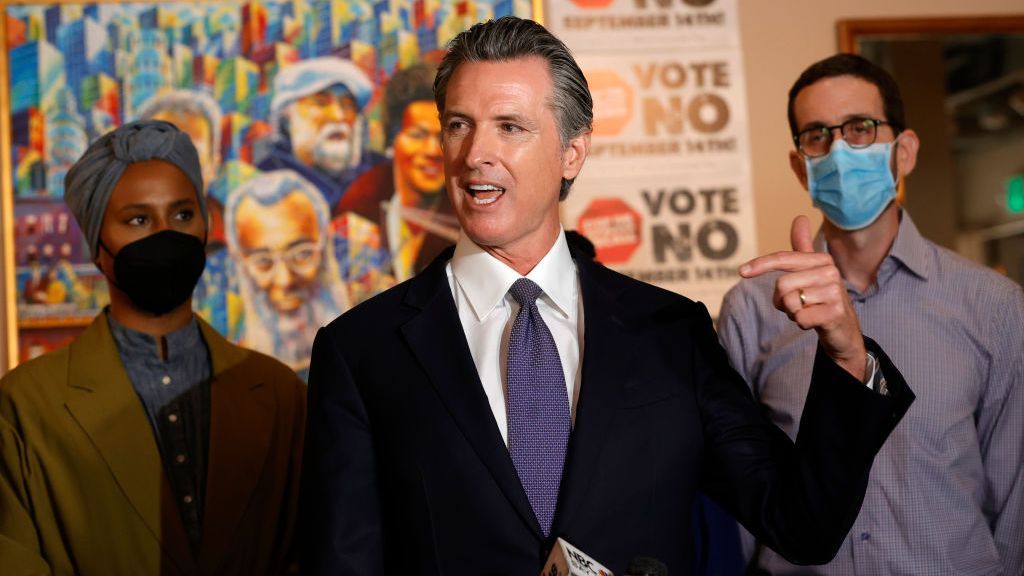 California Gov. Gavin Newsom speaks during a news conference on Aug. 13, 2021 in San Francisco, California, kicking off his Say No to the recall campaign. (Justin Sullivan/Getty Images)

The Republican-led effort to recall California Gov. Gavin Newsom over his handling of the COVID-19 pandemic could end up being much closer than expected, political analysts told Zenger, even if a majority in the Democratic stronghold don’t want to see him go.

Californians go to the polls Sept. 14 to decide whether to oust the 53-year-old first term governor, who previously served as mayor of San Francisco. He was elected governor in Nov. 2018 with a 61.9-to-38.1 percent majority over Republican candidate John H. Cox.

In the recall, opinion polls have showed Newsom ahead since the start of the campaign, and most still show him holding on to power. An Aug. 29 poll by the Trafalgar Group had Newsom ahead 52-44 percent, while an Aug. 28 poll by SurveyUSA put the figure at 51-43 percent.

Despite this, some have predicted an upset, noting expectations of a Newsom victory might work against him if enough Democrats stay home on polling day confident he will win.

“Before the recall even started, polling indicated opposition [to Newsom’s removal] was … 60-to-70 percent of respondents,” he said, adding the race could now come down to the wire. “The polls that have been done have showed that the race has become closer and closer.”

Whatever happens, the result on Sept. 14 will put the national spotlight on a quirk of California’s electoral system: A governor who won almost two-thirds of votes in the most populous state three years ago — and who faces a re-election campaign only a year from now — can have his incumbency thrown up in the air by a small minority of voters.

“Recalls are very inviting to [Republicans] because they heavily favor minority parties, which the California GOP has been for a very long time. It only requires a 12 percent of registered voters to trigger, which inevitably creates complications for incumbents,” said Raphael Sonenshein, executive director of the Pat Brown Institute for Public Affairs at CalState Los Angeles.

“The only state-wide office they’ve won in the past twenty years was through a recall,” Sonenshein said, referring to former Republican Gov. Arnold Schwarzenegger‘s successful 2003 campaign against Democratic incumbent Gray Davis only 10 months into the latter’s second term.

Sonenshein said Newsom’s future will ultimately dependent on the level of turnout among Democratic voters, which he noted is typically lower in off-year elections.

But Sonenshein also characterized the effort, which has multiple Republican candidates running to replace Newsom, as “effectively a Republican primary” and a dry-run for the GOP ahead of the regularly scheduled gubernatorial elections due in Nov. 2022.

The history of California allowing recall elections goes back to the 1910s. Enacted in the state constitution, recalls were meant “to allow the electoral majority to counteract corruption, which during the Progressive Era was very important to counteract the power of the big railroad companies,” said Richard Groper, political science professor at CalState Los Angeles.

Newsom, though, has come under fire from some quarters for his response to the COVID-19 pandemic, with Republicans running against him pledging to roll back his policies, such as in-door mask mandates. His leading opponent, conservative radio personality Larry Elder, has pledged to remove the state-level mask mandates and vaccine mandates.

Elder, a long-time staple of conservative media and a well-known critic of California’s liberal-leaning politics, is the favored candidate by what California State’s Dark called a “a substantial margin,” against a slate of some 40 opponents that includes Cox and former San Diego Mayor Kevin Faulconer.

Elder has notably been dogged by allegations of domestic violence, racism and misogyny.

He has in the past called for the dissolution of the minimum wage, criticized the 1973 Roe v. Wade Supreme Court decision that legalized abortion in the U.S., and has also accused people of color of “exaggerating the significance of racism.” Both his detractors and supporters have compared him to former President Donald J. Trump.

In any event, Elder is now benefiting from his greater name recognition, said CalState’s Groper.

“He has a very ardent following in conservative circles, and he fits the mold of the kind of candidates activist Republicans want to put in office,” he said.

Dark said that a widely-known candidate appealing to the Republican base — and hoping for laziness among anti-recall Democratic voters — is about the only chance the GOP had on Sept. 14.

“Many Californians don’t pay close attention to state politics. So folks that have name recognition are automatically boosted,” he said, adding Elder would be praying for low-turnout. “Democrats were already somewhat lukewarm about Newsom, and that’s bound to favor his opponents, even if they only represent a minority of the overall electorate.”

If the recall effort does manage an upset win, Elder could coast to power on relatively few votes, he added, noting there were so many vying to replace Newsom.

“Usually through party nominations the field of candidates gets narrowed down to couple of the most viable. But recalls are essentially open, so whoever gets the plurality of votes out of the field will win, regardless of the total number of ballots,” Dark said.

Still, Sonenshein said it would take a major turn of events to see Newsom lose on Sept. 14.

The Newsom and Elder campaigns did not respond to requests for comment.