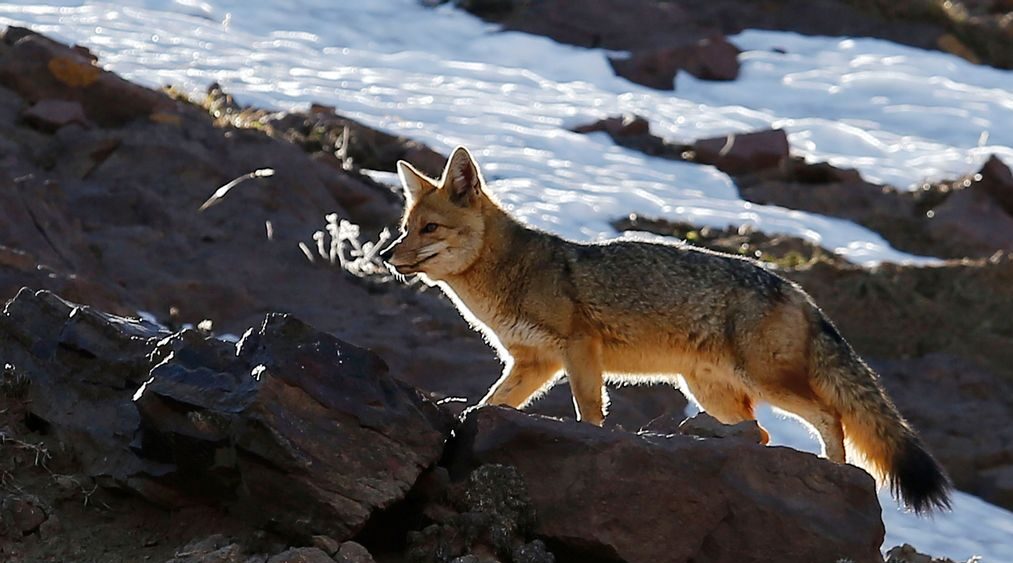 A fox walks through the Valle Nevado ski resort in Chile, which had to close a month earlier than normal. Every year, the Andes lose snow, triggering an energy crisis in the South American country. (Marcelo Hernandez/Getty Images)

TALCA, Chile — A power outage on August 14 hit several cities in southern Chile, but it was not an isolated blackout. In recent years, several Chilean cities had repeatedly gone dark.

Electricity in Chile comes from hydroelectric plants fed from rivers that run down the Andes. From November to March, the snow melts into these rivers. But every year, the Andes lose snow.

One answer is to explore solar energy.

The Chilean Solar Energy Association (ACESOL) organized an online conference “Evaluation of the Distributed Generation Industry as an engine of employment and efficient and sustainable development in post-COVID-19 Chile” on August 17. About 100 people joined via Zoom.

Chile is using solar energy to tackle a crisis and a drought. Experts say the government must play a more prominent role in supporting and promoting clean energy through legislation and information.

“The state must provide resources that ease … access to the advantages of distributed generation. Good regulation will bring benefits,” said Matías Negrete, a Catholic University of Chile researcher.

Government agencies, scientists and experts say in the short term, an energy crisis will hit Chile, so they have been raising awareness about the urgent need to shift to alternative energy.

“We are facing a sizable climate emergency. We must be responsible for our planet. The best way to do it is to contribute toward this goal from our homes. The benefits of distributed generation must reach everyone to reduce global warming,” said Alejandro Navarro, a researcher at the University of Chile Energy Center.

Navarro pointed out that studies show that distributed generation is efficient. What we achieve today regarding clean energy will affect future generations. (Distributed generation of electricity is for use on-site, rather than transmitting energy over an electric grid from a large, centralized facility.)

Chile’s Ministry of Energy and Energy Sustainability Agency are implementing the Casa Solar Program, where citizens will receive a subsidy to install a photovoltaic system and generate electricity in their homes. Photovoltaic panels self-generate energy and can inject surplus energy into the electrical grid.

The Chilean Congress approved the Distributed Generation for Self-Consumption Law in 2012, which gives users the right to sell their electricity surplus to the distribution company at a regulated price.

Aura Rearte, the director of ACESOL, said that Chile has enormous potential to harvest solar energy because it has the highest radiation in the world (275 watts per square meter). With completely clear skies, the Atacama Desert has exceptional conditions for energy scavenging.

“ACESOL is conducting a study whose objective is to lift the barriers for Chile to reach its full potential,” Rearte told Zenger.

Last June, Latin America’s first thermosolar plant began working in Cerro Dominador in the Atacama Desert. The plant has a power of 100 MW (megawatt) and produces clean energy 24 hours a day. (The International Energy Association estimated in a 2014 report that solar power could generate 16% of the world’s energy by 2050.)

Researchers from the University of Chile’s Institute of Complex Systems (ISCI) presented a study supported by the Ministry of Energy. Its objective was to evaluate how much the distributed energy industry has to contribute to the electrical grid and its local employment potential.

“Distributed generation is essential for Chile and its energy network. … The Casa Solar Program carried out 4,000 projects this year. We want to double this figure in 2022, removing obstacles to distributed generation,” said Gabriel Prudencio, the head of the Sustainable Energy Division, who spoke on behalf of Chile’s Ministry of Energy.

But achieving these goals may require legal changes.

“We need the Distributed Generation Law to change at the operational level. We need a structural change to move forward in the long term,” said Rodrigo Moreno, an Institute of Complex Systems scholar.

The study concludes that Chile would face the drought scenario more efficiently and democratize electricity delivery through the distributed generation system.

Scientists seek to raise awareness about solar energy among Chileans and expand access through financing options like solar bonds, which are municipal bonds issued to help finance local renewable energy technologies.  They could work like the Solarshare System in Canada and the Property Assessed Clean Energy Programs in the U.S. Another idea is to install Community Solar Gardens. The energy industry could create 96,257 jobs by 2040, per the ISCI study.

However, “most Chileans still cannot make the initial investment to install photovoltaic technology, and there is also little information about it,” said Rearte.

“The right to energy is as important as the right to housing, work and telecommunications. The use of energy should be considered as one of the fundamental rights,” Rearte said when asked if ACESOL is involved in the creation of Chile’s new constitution.