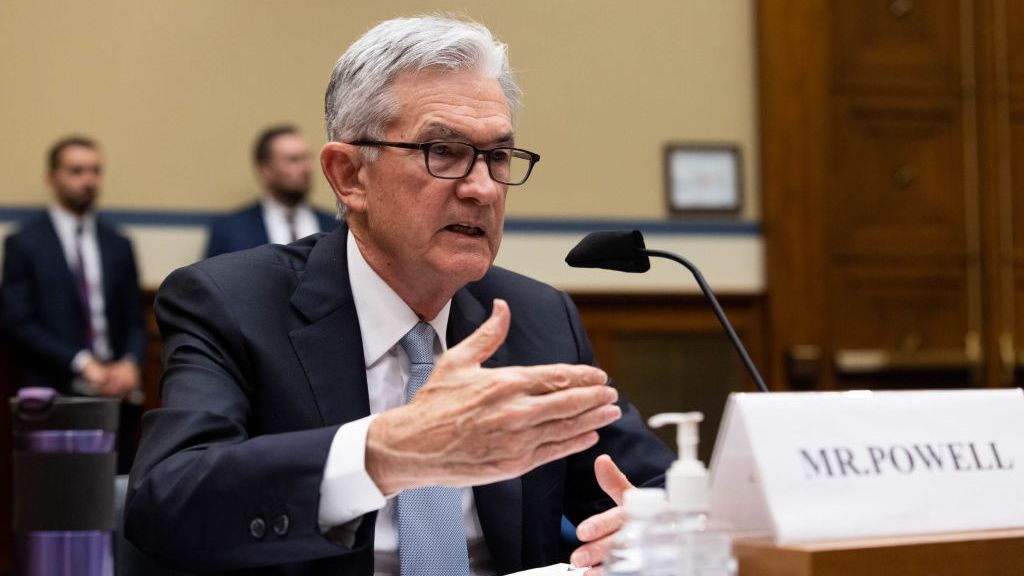 Jerome Powell, the chairman of the Federal Reserve Board, has painted a positive view of the economy. (Graeme Jennings-Pool/Getty Images)

While federal officials are projecting a rosy view of the economy, shoppers are proving to be much more skeptical, as recent consumer confidence surveys show that despite strong growth numbers, people are feeling more uneasy about opening their wallets and purses.

On Tuesday, a widely followed measure of consumer confidence fell in August, as the Conference Board’s Consumer Confidence Index dropped to its lowest point since February.  The 11.3-point decline in the poll is the latest in recent weeks to show a sudden downturn in consumer sentiment, fueled mostly by rising prices and the rising threat of the Delta variant of COVID-19.

The Conference Board’s index followed the most-recent University of Michigan survey of consumers, which showed a 13.4 percent drop in confidence in the economy from July to August, a result the report’s author called “stunning.”

“Concerns about the Delta variant — and, to a lesser degree, rising gas and food prices — resulted in a less favorable view of current economic conditions and short-term growth prospects,” said Lynn Franco, Senior Director of Economic Indicators at The Conference Board, in a release about the report.

In describing the two surveys, Swonk wrote that the University of Michigan’s survey is more sensitive to inflation, while employment conditions drive sentiment in the Conference Board index.

It’s one of many recent economic indicators that have some economists pointing to slowed growth to end the year.

“The boom we saw emerge last spring is starting to dissipate,” Swonk wrote.

But late last week, the White House and the chairman of the Federal Reserve Board painted a more positive view of the economy.

“The pace of the recovery has exceeded expectations, with output surpassing its previous peak after only four quarters, less than half the time required following the Great Recession,” said Federal Reserve Board Chairman Jerome Powell on Friday at the Federal Reserve Bank of Kansas City’s Jackson Hole economic policy symposium.

That same day, the White House Office of Management and Budget signaled it believed the $1.9 trillion pandemic stimulus legislation approved in March would create a near two-point jump in the nation’s gross domestic product in 2021. In its budget review, the White House forecast gross domestic product growth of 7.1 percent in 2021, an increase from an earlier assessment of 5.2 percent.

However, with conflicting economic data, Powell said the Federal Reserve would likely continue its asset-buying program, where it helps boost financial markets by purchasing billions in federal Treasury and mortgage-backed securities, which reduces long-term interest rates but can also drive up inflation.

Powell said that the economy has improved since the full board’s last meeting in June and that the Fed could begin “tapering” its purchase of assets later this year. Since June 2020, the Federal Reserve has been buying $80 billion monthly in Treasury securities and $40 billion on mortgage-backed securities. Powell also said that whether the Federal Reserve would keep interest rates at “near zero” would not depend on whether it ended its asset purchase program.

“The rapid reopening of the economy has brought a sharp run-up in inflation,” he said.

Several recent inflation indicators have edged higher in recent months, including one last Friday. The Commerce Department’s Bureau of Economic Analysis showed that its Personal Consumption Expenditures index, which tracks the prices consumers pay for goods and services, ticked up to 4.2 percent in July. And the most-recent Consumer Price Index, a key inflation tracker, in mid-August measured that prices in July jumped one-half percent, showing that consumers were paying 5.4 percent more for goods and services than a year ago.

One sector where prices were soaring were home prices, which also saw another jump on Tuesday, when the S&P CoreLogic Case-Shiller U.S. National Home Price index, covering all nine U.S. census divisions, reported a 18.6 percent rise in June, up from 16.8 percent in May.

However, Powell described the nation’s pandemic economic recovery as “anomalous.”

“Inflation at these levels is, of course, a cause for concern,” he said. “But that concern is tempered by a number of factors that suggest that these elevated readings are likely to prove temporary.”

Indeed, the Conference Board’s Franco said some results of its consumer confidence index reflect a variety of changing factors and preferences.

“Spending intentions for homes, autos and major appliances all cooled somewhat; however, the percentage of consumers intending to take a vacation in the next six months continued to climb,” Franco wrote. “While the resurgence of COVID-19 and inflation concerns have dampened confidence, it is too soon to conclude this decline will result in consumers significantly curtailing their spending in the months ahead.”

Another factor that Powell said the Federal Reserve will weigh when considering its support for the economy is employment, which has also risen in past months. The latest federal jobs report will be released this Friday.