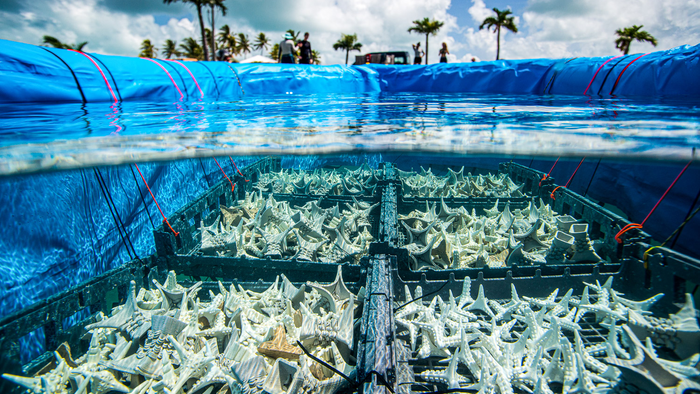 As technological advances can potentially address disease and mass die-offs in the world’s coral reefs, a leading conservation organization, supported by a recently released scientific paper, is urging politicians and decision-makers to take action.

“We need to advance our scientific research, technology development and training and implementation programs at a much faster pace because every single coral spawning event is crucial in this race against time,” said Dirk Petersen, founder and executive director of SECORE, an Ohio-based nonprofit engaged in the restoration of coral reefs.

“I feel a great responsibility and urgency in this race against irreversible loss,” he said.

In the July 30 edition of Restoration Ecology, scientists from the National Autonomous University of Mexico (UNAM) and Chicago’s Shedd Aquarium declared success in breeding thousands of microscopic coral larvae in floating mesocosms, which enable the study of the natural environment under controlled conditions.

The co-authors of the study used floating mesocosms dubbed Coral Rearing In-situ Basins, or CRIBS, to produce coral larvae with no need for land-based labs or aquaculture facilities.

“They are a safe place to support the coral babies through their first fragile life stages, including the radical change of a free-swimming coral larva turning into a sessile animal that eventually will grow into a coral colony,” said Kelly Latijnhouwers, Caribbean restoration coordinator for SECORE.

Researchers found that the CRIBS are as efficient in converting coral embryos to coral settlers as land-based labs or aquaculture and successful in a range of locations for at least five coral species. CRIBS can be used wherever coral restoration is needed, but facilities are few, the researchers point out.

Coral bleaching, disease and die-offs have drawn public attention to the need for restoration, the authors said. To facilitate restoration, SECORE International has bred corals on a large scale, breaking down the process into three steps:

2) culturing coral larvae to settle and metamorphose into coral polyps;

3) placing the young corals back into the wild.

SECORE has designed substrates that encourage larval settlement in particular areas of the reefs through surface features such as grooves and micro-ledges, which also protect the settlers as they mature. They are designed to reduce competition with other organisms, such as turf algae, because of their surface texture and material. They do not require being manually attached to the reef when transplanted but are caught in the reef because of their 3-D shape.

The study’s authors expect that future restoration efforts can selectively breed or harden coral recruits to cope with rising seawater temperatures and other hazards.