The body has the legal muscle to put revisions to combat injustice on a Nov. 2022 ballot for New Yorkers to consider. 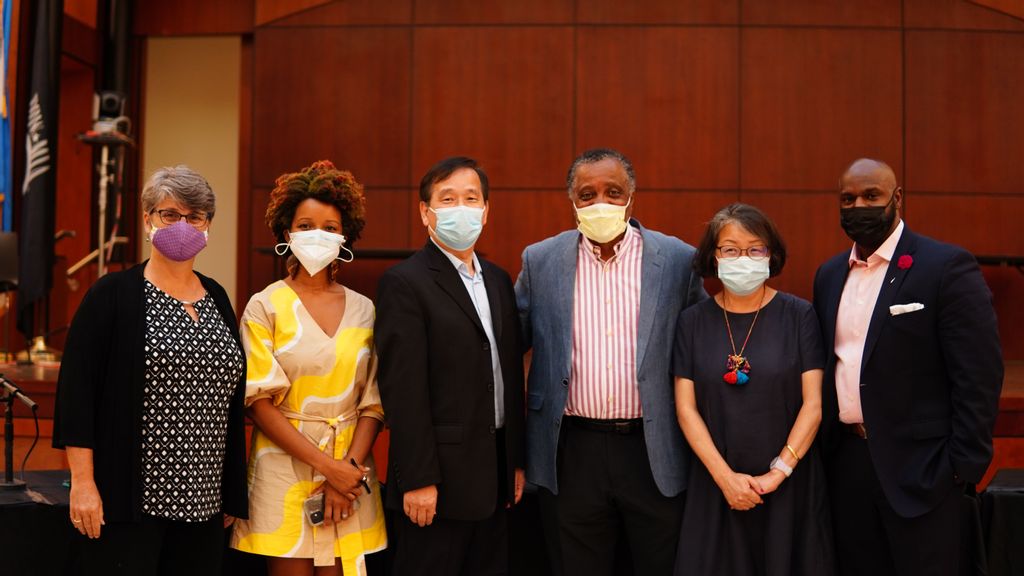 NEW YORK — The New York City Racial Justice Commission has real power — it can revise the New York City Charter. It can propose key structural changes and policy reforms to eliminate the systemic racism people of color face. And it’s asking for public input to secure that goal.

The 11-member commission formed in March consists of scholars, lawyers and activists.

Public meetings were held in Staten Island, Brooklyn, Queens, Manhattan, the Bronx and virtually to let the commission hear ideas for change from New York’s residents, who mostly spoke about the barriers they face in housing, transportation, healthcare and education.

The strategy is twofold: First, the commission gathers information, then it is distilled into voting proposals to change the New York City Charter, which will be put to a Nov. 2022 ballot.

Specific topics discussed so far have included: “Overcoming Racial Disparities in Health and Mental Health,” “Eradicating Education in Inequity for BIPOC,” “Achieving Racial Equity in Housing and Land Justice,” and “Planning for a Racially Equitable Future.”

Other topics to be explored include: “Economic Equity and Closing the Racial Wealth Gap,” “Ensuring a Fair and Just Legal System for All Persons,” and “Equity Across Identities.”

Then the practical work begins.

The volunteer commission will put select ideas and proposals into a report scheduled for release to the public in October. The report expects to focus on the root causes of inequities and offer tangible suggestions for change. Proposals selected for the Nov. 2022 ballot will be announced via a 10-month public-awareness campaign that will include TV ads, an online campaign, public forums and specific days when volunteers distribute key information in high-traffic areas.

The effort to eliminate racism is just the latest push to change the city’s charter.

The most recent revision of the NYC Charter took place in 2020, after 19 ballot proposals, combined into five questions, were approved in the Nov. 5, 2019 election.

The proposals included the implementation of ranked-choice voting for primary and special elections and amendments to land-use policies, the City Budget, and the Civil Complaint Review Board. (The first election under the new ranked-choice rules ended with Eric Adams, the Brooklyn borough president, as this fall’s Democratic mayoral candidate.)

“We’re centering on structural racism that exists in the current New York City Charter and how the Charter helps uphold and embed racism. That doesn’t mean we’re going to identify 100 things in housing that need to be changed or 50 things in education. We’re looking at the root and how the root itself allows for systemic racism to be played out in these different spaces.”

The commission held one of its public meetings on Aug. 4 at Bethany Baptist Church in Brooklyn’s Bedford-Stuyvesant neighborhood. The setting was inspiring and appropriate, according to Austin. Her father, Pastor William Augustus Jones, Jr., began fighting for economic justice in the same building more than five decades ago. Rev. Jones, who died in 2006, served as pastor for 43 years and was a confidant of Martin Luther King Jr.

Meetings were conducted at the church every Saturday morning as part of Operation Breadbasket, founded by the Southern Christian Leadership Conference.

Operation Breadbasket, which operated from 1962-1972, confronted racism and fought to improve economic conditions for blacks. One tactic: Black ministers and churches threatened boycotts unless blacks were employed by companies that sold products to blacks, such as Tasty Baking Company and Pepsi-Cola in Philadelphia.

Now his daughter is on the front lines battling against racism.

“It was great to be back there doing the same thing in certain respects 40 years later,” Austin said. “People felt a connection to know that the church has been a house of social justice, and here we were in that space, knowing that we’re still fighting this fight.”

Austin, like most of the diverse group of commissioners, has made a career fighting for social justice.

She is also the CEO of the Federation of Protestant Welfare Agencies, which promotes social and economic well-being. A graduate of Fordham Law, she was appointed the city’s first family-services coordinator by former New York mayor Mike Bloomberg and served on the Police Reform and Reinvention Commission created by current Mayor Bill de Blasio.

“I know we’re not going to solve racism overnight,” said Austin, who has seen well-intended programs fall short of their goals. “But if we can begin to dismantle the strongholds of racism rooted in the law in New York City, then we will be well on our way.”

Some “strongholds” were identified during the public sessions.

They were insufficient language programs that create issues for healthcare access; failure to enforce education and government-service laws meant to protect against racial discrimination; a lack of access to legal services; and how the affordable housing crisis in New York City disproportionally impacts people of color.

Chris Kui, a former longtime executive director of Asian Americans for Equality, is part of the commission and is optimistic it can influence change.

“The Racial Justice Commission is basically serving as a Charter Revision Commission,” Kui told Zenger. “The merging of the two in terms of running on a parallel track gives some substance to it. After getting input from the community, we can put it on the ballot.”

Jo-Ann Yoo, executive director of the Asian American Federation, also serves on the commission and has devoted her life’s work to social justice. The public sessions held by the Racial Justice Commission prove the barriers to equity impact all people of color.

She points out one-in-four Asian Americans live below the poverty line.

“We’re some of the poorest New Yorkers and have the highest deportation rate, but that narrative is never told,” Yoo said. “The commissioners bring that lived experience and an understanding of how all the dynamics play out to marginalize our communities.”

“The challenge for us is that when people talk about problems, they often talk about quick solutions,” Austin said. “They want to center on specific programs or additional funding. All of that is important. But we have to appreciate that when racism is structural and embedded in law, programs aren’t going to change the situation.”

The commissioners believe the climate remains ready for change.

“This is the time for us to have these critical conversations,” Austin said, echoing something her father might have said.  “We’re the first city to have a formal structure to deal with this. It’s really an exciting time and an honor to serve our community and plan these things for the next generation and the generations to come.”