Popcorn With Zenger: ‘Together’ Is A Brilliantly Cast Bare-Bones Film

Set during the first COVID-19 lockdown, powerful story takes audience on a roller-coaster ride through the five stages of grief. 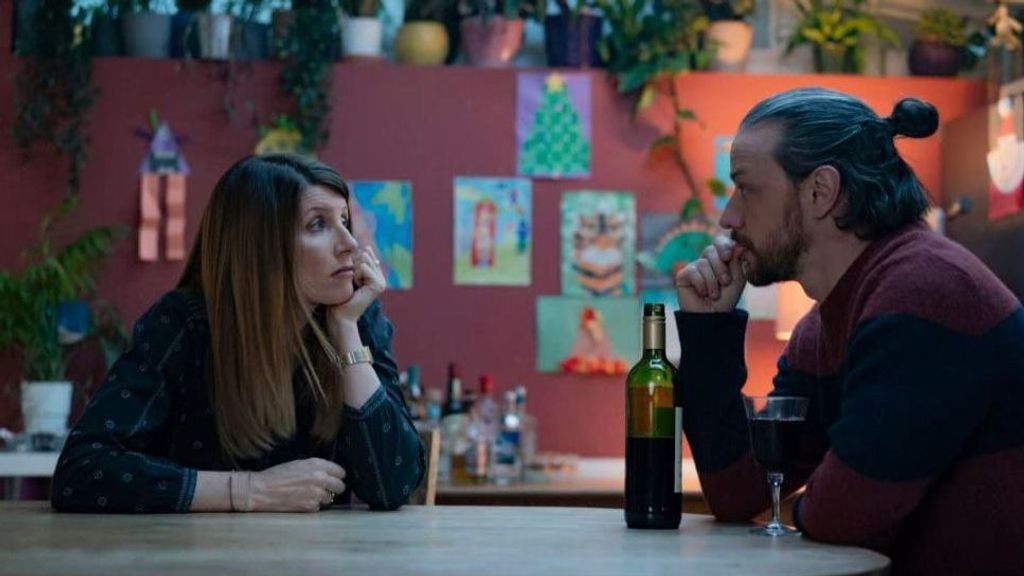 The onset of the COVID-19 lockdown in 2020 in the U.K. has the characters played by Sharon Horgan and James McAvoy facing some difficult truths. (BBC Film)

In a world of remakes and reboots that you didn’t ask for and want even less, it’s easy to feel like the days of quality cinema are over. But then a film comes along that is so unique it reignites the passion you thought had burned out. Case in point: the BBC Film project, “Together.”

The last 18 months have been hard on everyone, between the COVID-19 outbreak and the harsh lockdowns that have accompanied them. Even now, there are numerous film productions that are being marred by the added stress of attempting to safely film new content under government regulations. BBC Film found a creative way around this dilemma in “Together” — a movie about living in COVID lockdown from a single location in the span of 10 days.

A feature-length film that took only 10 days to shoot? With a small crew and two high-quality actors to pull the load, “Together” — written by Dennis Kelly and co-directed by Stephen Daldry and Justin Martin — pulls off an audacious feat.

The Story: Set in the United Kingdom during the first days of the COVID outbreak, an older couple referred to as simply “He” (James McAvoy) and “She” (Sharon Horgan) are subject to a new world of conflict with their 10-year-old son (Samuel Logan) during a global pandemic. He is a conservative Tory business owner, and She is a self-proclaimed recovering socialist who is dedicated to the growing refugee crisis. Stuck together during government lockdowns in 2020, the couple is forced to overcome trying times as well as each other.

The couple takes you into their lives during various stages of the pandemic as they deal with the uncertainty of the world around them as well as the uncertainty of their own relationship. The breakdown of relationships, the loss of loved ones and the anger of a situation beyond their control are just a few issues that audiences can relate to because they wrestled with the same dilemmas themselves.

Bright Spots: “Together” is a comedy-drama that showcases the struggle of the human condition. The film turns audiences into the unofficial third character in the movie, as the couple breaks through the so-called “fourth wall” to address the audience directly. The film gives the viewer a window into the highs and lows of a rocky relationship without the tropes of casting judgments.

There are no camera tricks, no special effects or scenic destinations. “Together” is a masterclass of storytelling and character development. We get to know the characters from their upbringing to their current living situation. The emotional connection works because the characters mirror the experience of their audience members during the different stages of the lockdown.

The uncertainty of the future, the realization that things will never be normal, the grief of loss and the attempt to put the pieces back together— the film is a roller-coaster ride through the five stages of grief and leaves the audience wanting just a bit more.

The acting from Horgan and McAvoy is brilliant. Both play a vital role in being the lifeline of the film. The characters begin the movie hating each other, quipping back and forth about their living arrangement. As the film progresses, the quipping dies down and you get imitate stories about family and love, which show that despite how much they claim to despise each other, they both play a vital role in the emotional stability of their lives.

Weak Spots: The film at times flirts with heavy-handedness and melodrama. It doesn’t attempt to play political games about COVID, but does occasionally dip into left-leaning talking points about how the pandemic was handled despite government incompetence being mirrored on a global level.

The film leaves an elephant in the room by featuring their young child but never going into details about how they co-parent under the same roof. Apparently, the earlier versions of the script didn’t have any children featured on screen, but the film is missing a key portion of the story without mentioning one of the most important aspects of their relationship.

The Takeaway: McAvoy and Horgan represent the average couple dealing with the struggle of living in lockdown, but their amazing performances pull you into a fictional world that recalls real life as it has been for the last 18 months.

See or Skip: “Together” is simple storytelling and bare-bones filmmaking at its finest.

«Previous Post
Natalie Morales’ ‘Language Lessons’ Defines True Friendship»Next Post
Popcorn With Zenger: ‘Shang-Chi And The Legend Of The Ten Rings’ Is A Bland Addition To The MCU