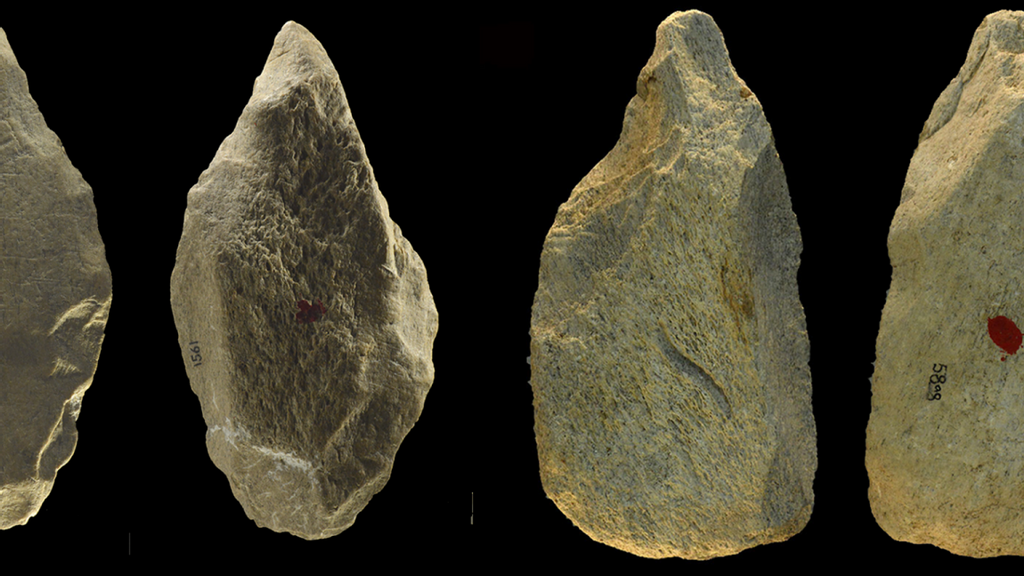 Ancient Neanderthals could do some impressive things with elephant bones, including shaping them into everyday tools.

Using sophisticated methods, the Neanderthals developed a craftsmanship predating that seen 100,000 years later, according to a new study.

Appearing in the August 26 edition of PLOS ONE, the study identifies 98 bone tools that were discovered by excavators from 1979 to 1991. These constitute the greatest number of flaked bone tools fashioned by pre-modern hominids so-far described.

In a survey of a site in Italy, archeologists found deposits of tools made from elephant bones about 400,000 years ago.

“We see other sites with bone tools at this time,” said Paola Villa, adjoint curator of the Colorado University Boulder Museum of Natural History and the lead author of the study. “But there isn’t this variety of well-defined shapes,” she said.

Ancient humans used elephant tusks and bones to make the pointed tools found at Castel di Guido, which is located near modern Rome. At the time, a now-extinct elephant species, the straight-tusked Palaeoloxodon antiquus, came to drink at a stream gully.

“At Castel di Guido, humans were breaking the long bones of the elephants in a standardized manner and producing standardized blanks to make bone tools,” Villa said. “This kind of aptitude didn’t become common until much later.”

At the time, Homo neanderthalensis, Neanderthals, were the most common hominid. This species later merged with Homo sapiens to give birth to modern humans.

“About 400,000 years ago, you start to see the habitual use of fire, and it’s the beginning of the Neanderthal lineage,” Villa said. “This is a very important period for Castel di Guido.”

Scarcity may have been the mother of inventiveness at Castel di Guido.

Because the region has few sources of natural flint, which ancient hominids used to make knives, scrapers and spear points, Villa believes they resorted to using dead elephants.

“The Castel di Guido people had cognitive intellects that allowed them to produce complex bone technology,” Villa said. “At other assemblages, there were enough bones for people to make a few pieces but not enough to begin a standardized and systematic production of bone tools.”

Some of the bone tools had sharp points that may have served to prepare meat as food.

Used as wedges, the tools may have been used to split elephant femurs. “First, you make a groove where you can insert these heavy pieces that have a cutting edge,” Villa said. “Then you hammer it, and at some point, the bone will break.”

Villa and her colleagues also found a tool made from a wild cattle bone. Long and smooth at one end, it may have been a lissoir: a tool used by Neanderthals to smooth leather. However, lissoirs were not common until approximately 300,000 years ago.

“At other sites 400,000 years ago, people were just using whatever bone fragments they had available,” Villa said.

The Palaeoloxodon antiquus species of elephant commonly stood 13 feet tall. Elephants of its genus thrived during interglacial periods from 781,000 to 30,000 years ago and ranged from England to much of Europe and the Middle East. As the Stone Age and environmental change progressed, P. antiquus and other elephant species began to disappear throughout Europe.

P. antiquus was the common ancestor of the dwarf elephants that were once found on many Mediterranean islands. Their skulls, which have a pronounced central naval cavity for the trunk, have been credited with giving rise to the  of Cyclop legend — the one-eyed giant of Greek myth mentioned in Homer’s “Odyssey.”