The Oslo adrenaline junkie spreads his limbs wide and flies at 62 mph before bending at the waist and entering the water safely. 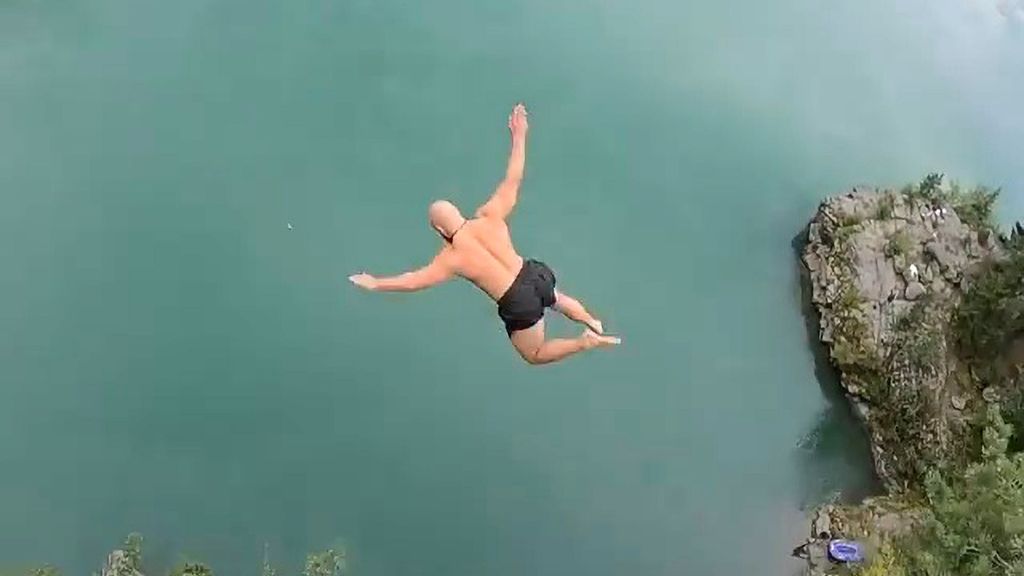 Norwegian Ken Stornes jumps from a 102-foot cliff in an effort to set a new “death diving” record on Aug. 21. (@kenstornes/Zenger)

A “death diving” enthusiast hopes to land a world record after jumping off a 102-foot-tall cliff into the frigid waters of his native Oslo, Norway.

Ken Stornes pulled off the risky leap on Aug. 21.

“Death diving,” as its name suggests, is especially dangerous. The divers keep their bodies open and their limbs spread out, as if preparing for a belly flop, for as long as possible. Only at the last moment do they shift to a much safer headfirst diving position.

In the clip he posted on Instagram, Stornes stands at the top of a high cliff and takes several deep breaths while preparing himself mentally. Then he throws himself from the cliff and reaches an estimated 62 mph, entering the water with a clap that can be heard at the cliff-top.

Stornes disappears under the water for a few seconds but draws triumphant cheers from friends after he surfaces.

The previous death diving record was 27 meters, about 88.5 feet. That mark was set in 2019, when Emil Lybekk dived off a construction crane. Lybekk’s leap was part of a publicity stunt for a men’s underwear brand called Comfyballs. He emerged from the water with the company’s logo painted on his chest.

There are organized “death diving” competitions—sanctioned events with judges determining who lasted the longest in midair without protecting his stomach from a belly-flop. But those contests typically involve dives of no more than 45 feet.

Known in Norway as Dødsing, death diving had its first world championship in 2008. Some of the events have been covered in live television broadcasts.

It’s not clear whether any adrenaline junkies have died while undertaking death dives. But the specter of death or serious injury is enough to drive at least one Minnesota personal injury law firm to advertise the risks.

“The water will not cushion your fall,” warns Meshbesher & Spence.

“In truth, the speed you pick up while in the air (even if it’s only a few seconds) can make hitting the water’s surface feel like colliding with a brick wall,” the firm said.

Even if Stornes’s death dive is certified as the world’s highest, there are professional divers who regularly fling themselves off taller cliffs. The La Quebrada Cliff Divers put on daily shows for tourists in Acapulco, Mexico, leaping into the ocean from 135-foot cliffs of La Quebrada.

Acapulco cliff divers, however, swan-dive headfirst the whole way down.