The 10-foot-long creature lived 43 million years ago; scientists named it for the Egyptian god of the dead. 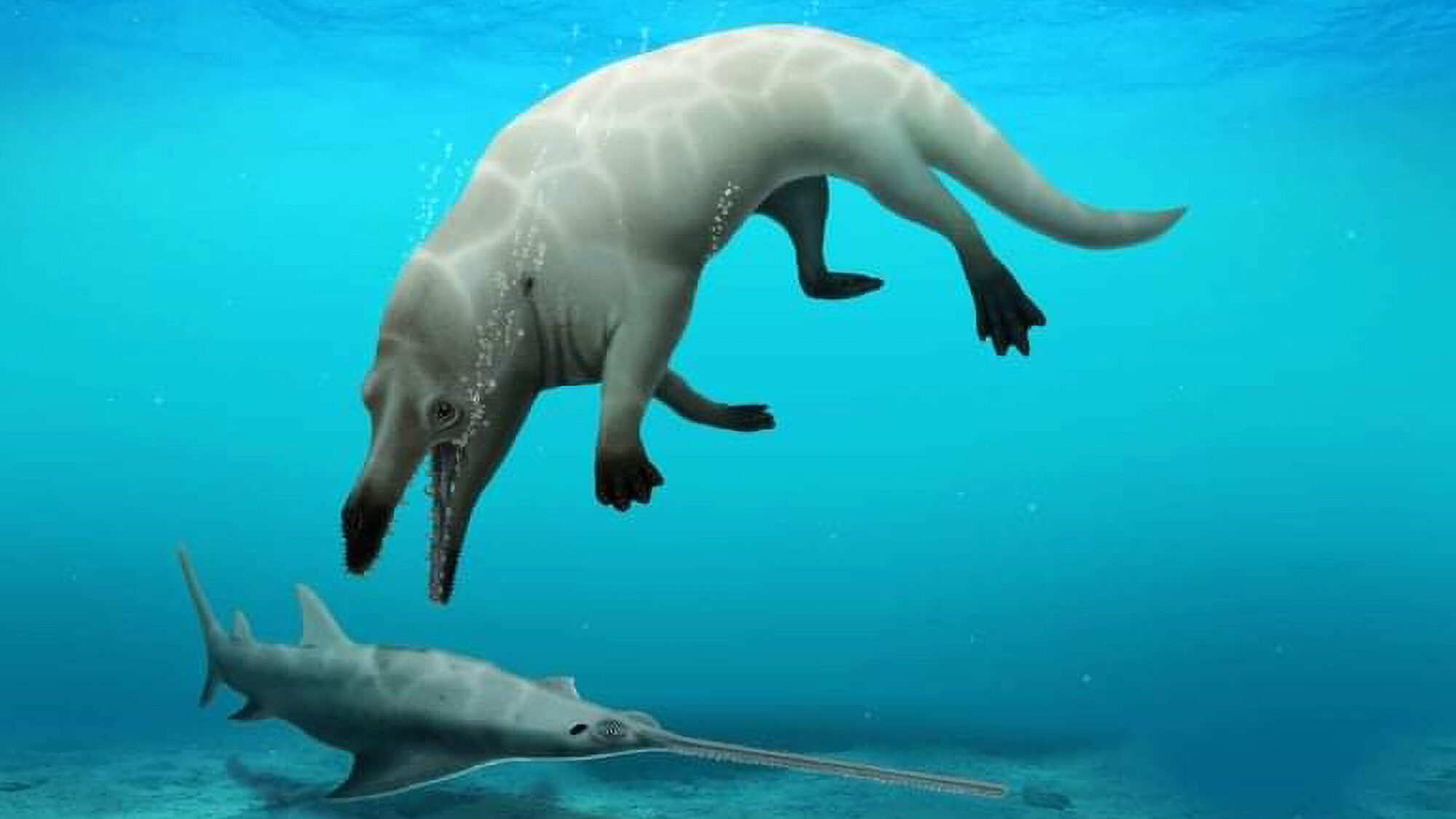 A fossil of a new type of amphibious whale that lived 43 million years ago in the Faiyum Oasis area of Egypt, has been named Phiomicetus anubis, the latter word referring to an Egyptian god of the dead. The 10-foot-long whale had a mouth like a crocodile and apparently could walk on land, as well as swim. (Egyptian Ministry of Environment/Zenger)

Fossilized remains of a previously unknown four-legged “vicious African whale” species found in Egypt — with a mouth like a crocodile — are an important link in the mammal’s transition from land to sea, scientists say.

The 43-million-year-old amphibious specimen, which weighed more than 1,300 pounds and was nearly 10 feet long, is believed to have dominated both land and sea during the middle Eocene Epoch. That’s a stretch of prehistoric time that began 56 million years ago and ended 33.9 million years ago.

A team of scientists and experts from Mansoura University and Egypt’s Environment and Scientific Research ministries discovered the fossils in the Faiyum Oasis, a depression in the desert about 80 miles from Cairo. The Lake of Qarun, far smaller today than it once was, is in the oasis where the Nile River flowed millions of years ago.

The team of scientists named the extinct whale “Phiomicetus anubis,” after the ancient Egyptian god of the dead, Anubis.

“The research reveals the oldest and most vicious African whale,” Minister of the Environment Dr. Yasmine Fouad posted on Facebook.

The remains were extracted in 2008, the Ministry of Environment stated, but analysis began nine years later and was completed only this year, confirming the whale’s species.

“The discovered whale is older than all African whales found so far, plus one of the strongest whales discovered so far,” Mohamed Sameh, a paleontologist at the Ministry of Environment, confirmed in the ministry’s Facebook post. “The anatomical analysis of this fossil proved that the whale has a very strong bite [that] might outweigh the deadly crocodile bite.”

In a research article on the discovery, published Aug. 25 by the Royal Society in its biology journal “Proceedings B,” the authors said the discovery will help researchers understand the “biogeography and feeding ecology of early whales.”

Sameh said the giant species could walk on land and swim, and had “smelling and hearing abilities.”

Fossilized remains of the skull, chest cage bones and parts of the lower jaw were extracted and analyzed. “Its jaw suggests that it had an incredibly powerful bite, possibly stronger than crocodiles,” Sameh said. “The shape of the fossil makes it resemble a land-dwelling animal more so than an aquatic species.”

Reflecting on previously known deep-ocean species, he said: “That new whale is totally different from all its peers.”