Small and medium-sized companies in Mexico have had to pull themselves up by their bootstraps. 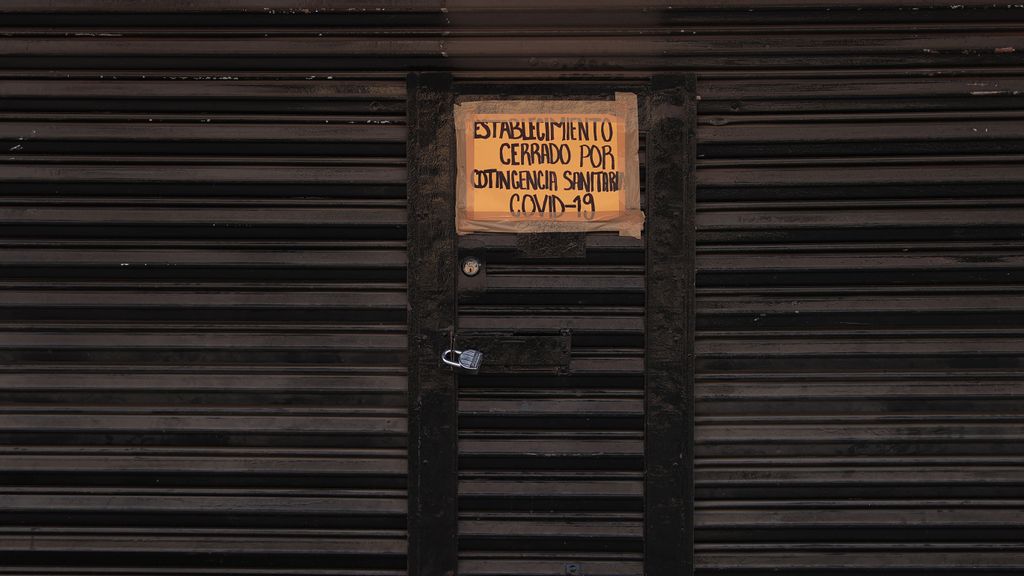 Many small stores in Mexico have closed down their doors as they went through the pandemic’s lockdown. They have not received government aid. (Hector Vivas/Getty Images)

MEXICO CITY — In Mexico, many businesses did not survive the pandemic. In 2020, 1 million companies closed down permanently, 20.8 percent of the country’s 4.9 million companies, according to a study on Business Demography done by the National Institute of Statistics and Geography (INEGI). Most of these companies are micro, small, and medium-sized businesses (MSMEs), a category that 99 percent of the country’s businesses fall into.

But the business closures were offset by the creation of 600,000 new companies.

“In Mexico, entrepreneurial activity during the pandemic is associated with informal or subsistence activities, as has happened in other periods of crisis. However, due to the lack of employment, people turn to entrepreneurship,” José Ernesto Amorós, director of Doctoral Programs at the EGADE Business School at the Tecnológico de Monterrey, told Zenger.

Besides the companies that had to close down, 85 percent of the remaining businesses have had a lower income, according to a survey on the Economic Impact Generated by the COVID-19 in companies, conducted last February by Inegi. For 73 percent of companies, the most significant impact has been a drop in income, followed by a decline in the demand for their services. In addition, the shortage of services has impacted 30 percent of the businesses surveyed.

Samir Chehaibar could not avoid the effects that Covid has wrought on his business. The marketing agency he runs lost more than half of its clients in one year. “It was sad to see that many businesses are no longer there, as they have closed down,” said Chehaibar, who is based in the state of Baja California, Mexico.

The situation began to affect his liquid assets, and one of his first actions was to cut back many of the services he needed to operate his business and negotiate some payments with his suppliers. He also had to implement new business strategies.

In the end, he managed to get ahead. “We managed to improve our situation. Currently, we are already recovering what we have lost,” he said.

Before the pandemic, small businesses already faced challenges. According to the X-Ray of Entrepreneurship 2020 of the Association of Entrepreneurs of Mexico (ASEM), among the reasons behind the failure of Mexican entrepreneurs are the lack of knowledge of the market, poor business management, lack of working capital and lack of financing.

Under these conditions, the mandatory lockdown during the pandemic’s first months became the coup de grâce for many companies.

Making matters worse, these businesses are the source of 78 percent of the country’s employment. “The economic reactivation of Mexico as a country has to come from strengthening the MSMEs,” Juana Ramírez, president of ASEM, told Zenger.

Forgotten by the government

Entrepreneurs have faced many struggles while economic reactivation has come little by little, as businesses have started to reopen and more people have received the vaccine. However, Mexico’s federal government, led by President Andrés Manuel López Obrador, has not supported many businesses.

“Entrepreneurs have not enjoyed a lot of support, except in some exceptional cases in some states,” said Ramírez.

Only 3.8 percent of Mexico’s MSMEs received any type of support this year, according to a study done by Inegi. In the first edition of that study prepared in April 2020, when all non-essential economic activities closed down, only 7.8 percent of businesses received support.

According to the Global Entrepreneurship Monitor Global Report 2020/2021 (GEM), which studies the entrepreneurial activity of 46 economies worldwide, Mexico ranks 43rd in terms of government support policies during the pandemic.

“All public programs that sought to bring support to entrepreneurs practically disappeared during this administration. There is some direct support, but 20,000 monthly pesos ($1000) are only enough for a month’s payroll,” said Amorós, who is also the coordinator of the GEM report in Mexico.

In addition, he says that there is a lack of greater integration between small, medium, and large businesses and that the result of this is the creation of companies with little added value.

After the first months of the pandemic, Top Fit, a sportswear brand, had to close its physical store located in the city of León, in the Mexican state of Guanajuato. “We could no longer pay rent, so we had to readapt part of our home as a warehouse,” said Salomón Torres, founder of the company.

Although he had a virtual store, sportswear sales went flat between March and September of the last year, as “people had other priorities, and they were taking care of their finances.”

To avoid closing the business, Torres came up with the idea of opening an online body fitness service. “We began to make personalized training videos with the advice of a nutritionist,” he said. Their reach was international, with clients in Europe and even Saudi Arabia.

Due to the lack of support, MSMEs have had to seek help to get ahead on their own or to join up with business organizations.

“MSMEs have had to make various and significant modifications, from investment in digitization, training of all kinds, as well as searching new forms of financing, or even changing their business model,” said Jorge Corral, the executive director of ASEM, on June 27, during the MSMEs day.

Entrepreneurs are faced with a change in how their market used to buy their products or services. “People and companies have stopped needing the same things they used before, and the value of these items has changed,” said business coach Salvador Vinals. “There was a need to rethink the value of the many things we needed.”

Faced with the liquidity problems of many of his clients, Samir Chehaibar redefined some of his strategies. “We are making changes in the services we provide, as raising prices is not an option,” he said.

To adapt to the finances of his customers, he decided to do marketing ‘micro-campaigns’ so that they can continue to use the service. “That way, they can save money while I have the opportunity to look for other clients,” he said. In addition, he has made alliances with other companies to expand his services.

One of the most significant changes for these businesses has been the adoption of digital tools. In Mexico, 83 percent of MSMEs say that adopting new technologies has been key to the reactivation of their businesses, according to Microsoft information presented by the ASEM.

Juan Carlos Ostaloza, director of Mexico’s Center for Competitiveness, told Zenger that the pandemic advanced the country’s digitization and, as such, electronic commerce grew 81 percent in 2020. “We support businesses that wish to venture into the technological world, as it is a way that allows them to serve their customers in a better way.” The Center has offered training for 4,500 MSMEs to learn how to use e-commerce.

Entrepreneurship as an option

According to the Inegi survey, 27 percent of MSMEs could face problems paying their debts in the next six months, and 26 percent require new loans.

Even before the pandemic started, obtaining financing was one of the most significant hurdles that entrepreneurs face, and many micro and small businesses turned to their providers to get the needed capital. However, due to the lockdown, these providers are less willing to offer lines of credit to their clients.

Mauricio Castro, a micro-entrepreneur who owns a cafeteria, had to fire his first three collaborators as his income was insufficient. Left alone, he had no other choice but to invest his money in an automatic bread machine that prepared the items he desperately needed. It cost 80,000 pesos ($4000).

Castro resorted to a pledge loan, where he left an item of value as collateral in exchange for a loan. Traditionally, pawnshops accepted jewelry as collateral, but they have recently opened up to accept computers, cellphones, tablets and even cars.

“Thirty-three percent of the loans we make go to small and medium-sized companies,” said the Nacional Monte de Piedad, an institution that has dedicated itself to pledge loans in Mexico for over 200 years.

Castro decided to pawn his car, one of the options most used by micro-entrepreneurs during the pandemic. However, it was not required that he give up his vehicle as collateral, only its documentation. So far, in 2021, the institution placed 2,479 loans through that scheme, loaning around 199 million pesos ($9.82 million).

Besides financing, another form of support that MSMEs require, according to ASEM, are flexible paying schemes for taxes, paying suppliers in a 30-day plan, and simplifying procedures.

“Entrepreneurs will be the leaders of the economic reactivation of the country through their companies and their work teams,” said Ramírez.