Six police officers were charged over the deaths of two brothers arrested for violating curfew. 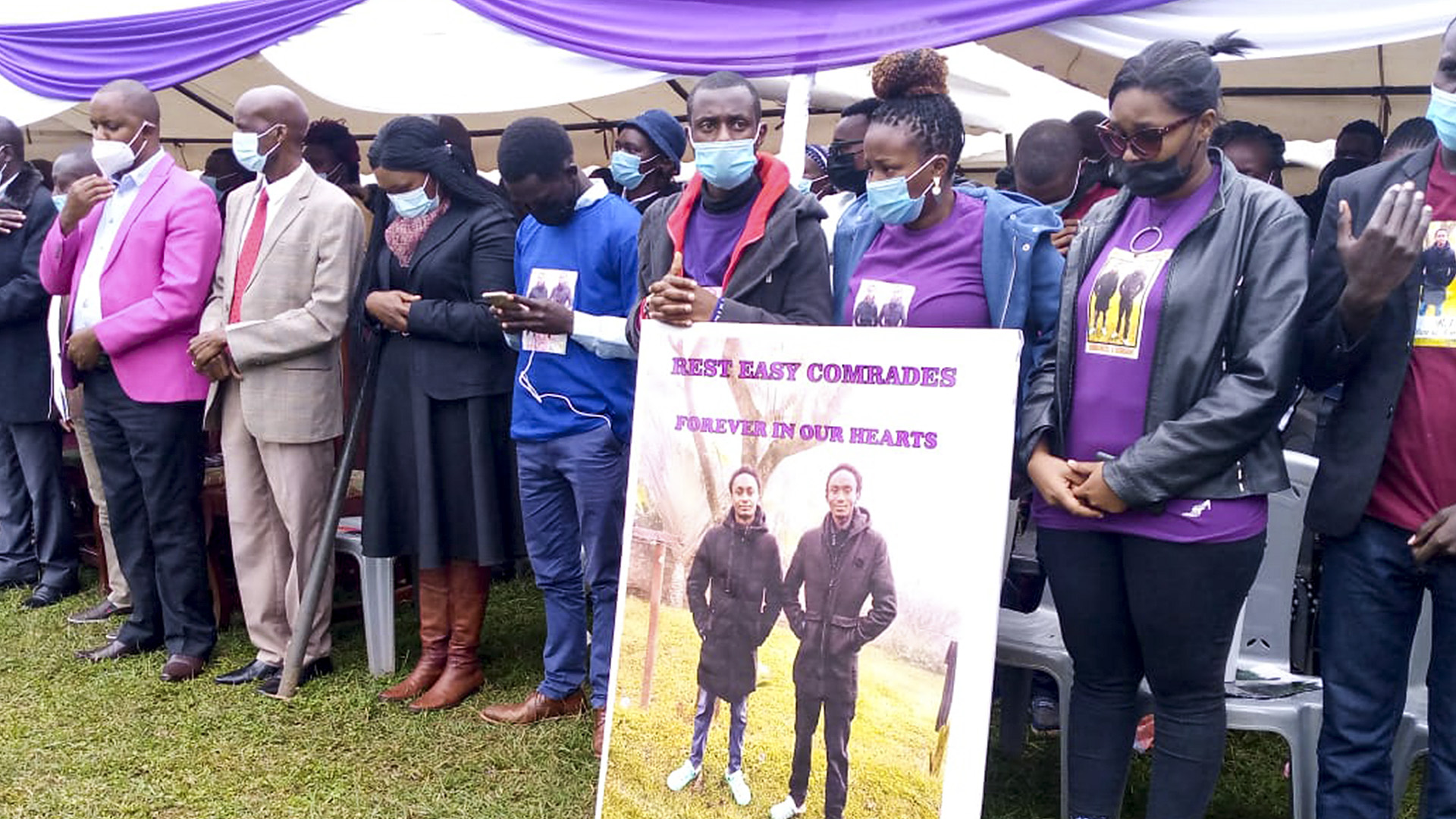 Mourners pose beside a poster of brothers Benson Njiru 22, and Emmanuel Mutura, 19, at their home in Embu County on Aug. 13. Six police officers were charged over the duo's deaths. (Zenger News)

They were never seen alive after that.

The bodies of the brothers, who had just opened a butchery business in Kianjokoma center, were found two days later at the Embu General Hospital morgue.

Embu police officers say the two jumped from a moving police vehicle, leading to their deaths.

The two brothers add to the list of victims brutalized by the Kenyan police enforcing the Covid-19 containment measures.

President Uhuru Muigai Kenyatta extended the 10 p.m-4.a.m curfew throughout the country for 60 days amid a rise of Covid-19 cases.

Following public outcry, the Director of Public Prosecutions Noordin Haji charged six officers on Aug. 15 with the death of the two brothers.

“The prosecutions made the application to remand the officers for 14 days in the interest of criminal justice and public interest and also to ensure investigations are not compromised,” Haji said in a statement.

The suspects will appear in court for plea taking on Aug. 31.

The two officers signed off on an official report saying the brothers had jumped from a police vehicle.

The Independent Police Oversight Authority also carried out investigations into the incident and recommended the officers’ dismissal.

While Kenyans were coming to terms with this incident, four police officers attached to Ruiru police station arrested a man called Robert Mutahi on the night of Aug. 12 for violating the 10 p.m. curfew hour and robbed him of Sh1,030 [$9.38].

The officers forced Mutahi to share his M-Pesa personal identification number. They then transferred the money from his account to a third party, whom the police identified as Martin Ndichu Kamau.

“One of the officers proceeded to take control of my phone, asked for my M-Pesa pin, and proceeded to check my M-Pesa balance,” Mutahi said in a public post on his Facebook page, which caught the attention of the police.

“The police officer proceeded to transfer Sh1030…and immediately transferred the same to another line. All the while, he was holding my phone and proceeded to delete the M-Pesa message. This was to prevent me from sending the same to 456 for reversal.”

The Directorate of Criminal Investigations said Kamau transferred the money to Thomas Agumba Okuku, a police officer in Ruiru, within the Nairobi Metropolitan Region.

Okuku, and three other officers, Lawrence Mbau, James Munyoki Mulei, and Dan Keya, were charged in court on Aug. 18 with robbery with violence.

“The police have become the enforcers of the law, jury, and executors of the penalty over the curfew law, and the sentence ranges from the robbery with violence to [the] death penalty,” said Mutahi.

On the night of Aug. 19, the police allegedly killed a motorcycle taxi man [commonly known in Kenya as bodaboda] found outside during curfew hours in Nairobi’s Kayole estate.

Locals said that the police cornered the deceased, John Kiiru, 38, at Tushauriane Stage and beat him to death. A motorcycle rider who tried to carry him home managed to escape the wrath of the police officers.

“He tried to escape on foot, but the police officers caught up with him, assaulted him, and left him to die at the scene,” Ibrahim Shikuku, a resident, told the press.

Kiiru’s wife, Esther Wanjiru, said that he called her at 12:30 a.m. on Aug. 19 and told her that police had seriously injured her.

“That is the last time I heard from my husband,” she told Zenger news.

“The following morning, a neighbor told me that his body was lying at the scene where the police assaulted him.”

His death sparked day-long running battles between the police and protestors. Demonstrators lit bonfires and used rocks and stones to block roads leading to the estate, thus paralyzing transport for the better part of the day.

On March 10, uniformed police officers who had chased civilians from the streets within Kayole broke into a bar that had already closed business to comply with the government’s curfew rules.

Moses Mwangi, the owner of Mossy Tavern Bar and Restaurant in Soweto, Kayole told the press that six officers stole cash and alcohol from the joint.

“Police officers should act within the law, and when they make arrests, they should ensure that they don’t harm suspects,” Mutyambai told Zenger News.

“I have issued orders to all police commanders in the 47 counties to ensure that they spearhead operations and ensure that people observe the Ministry of Health protocols on Covid-19.”

He said that officers were investigating a case in which two cops on Aug. 20 stormed a local joint located opposite the Karen Police Station and made away with drinks worth Sh110,000 [$1,000].

“Adopting to the current situation is hard,” he told Zenger News.

“A contributing factor is pressure from police bosses who want junior officers to enforce the law to the letter. Sometimes, it is impossible to do this without causing friction with members of the public. Officers need to be a bit humane and understanding when dealing with such situations.”

However, Houghton Irungu, the executive director of Amnesty International Kenya, said cases of police officers killing civilians had been there even before the Covid-19 pandemic.

“The nation reels from the shock of killings and injuries caused by police officers,” he told Zenger News.

“Amnesty International has continuously reminded the National Police Service that lack of masks and curfew violations are misdemeanors, not death sentences.”

Irungu said it is essential to train citizens to provide actionable intelligence to the Independent Policing Oversight Authority and other human rights organizations.

“The trend will go down if the Inspector General of Police demonstrates zero tolerance to officers who use excessive lethal force. Police custody and stations cannot be spaces for extortion and torture, and police officers must not become executioners.”