In a rare interview, a Taliban commander confirms the existence of a special unit called Al Isha using U.S. data to hunt enemies. 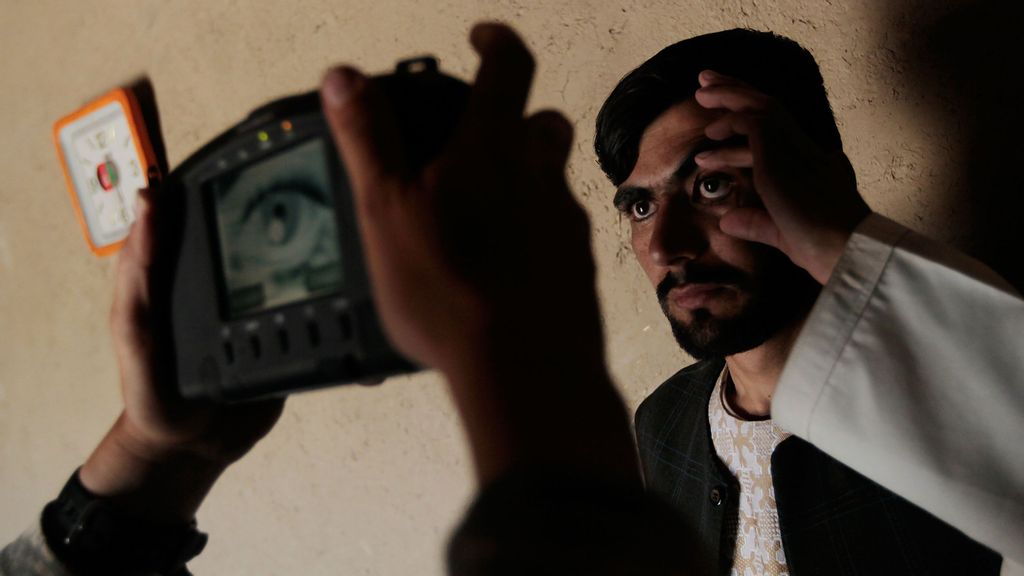 A U.S. Army soldier in the 1-71 Cavalry performs an iris scan for identification purposes with a handheld biometric device June 14, 2010, in rural Dand District, just south of Kandahar, Afghanistan. U.S. soldiers of the 1st Squadron, 71st Cavalry Regiment of the 10th Mountain Division are using biometric tools to catalog all military-aged men and boys in Dand Province, part of a counterinsurgency strategy aimed at finding and identifying Taliban insurgents and legitimizing the government of Afghanistan in the minds of the rural local populace. (Chris Hondros/Getty Images)

The Taliban has mobilized a special unit, called Al Isha, to hunt down Afghans who helped U.S. and allied forces — and it’s using U.S. equipment and data to do it.

Nawazuddin Haqqani, one of the brigade commanders over the Al Isha unit, bragged in an interview with Zenger News, that his unit is using U.S.-made hand-held scanners to tap into a massive U.S.-built biometric database and positively identify any person who helped the NATO allies or worked with Indian intelligence. Afghans who try to deny or minimize their role will find themselves contradicted by the detailed computer records that the U.S. left behind in its frenzied withdrawal.

The existence of the Al Isha unit has not been previously confirmed by the Taliban; until now the Haqqani Network, a terror group aligned with the Taliban, has not admitted its role in targeting Afghans or its use of America’s vast biometric database.  The Haqqani Network is “the most lethal and sophisticated insurgent group targeting U.S., Coalition, and Afghan forces,” according to the U.S. National Counterterrorism Center.

The power and reach of the U.S. biometric database are breathtaking. Virtually everyone who worked with the Afghan government or the U.S. military, including interpreters, drivers, nurses, and secretaries, was fingerprinted and scanned for the biometric database over the past 12 years.

U.S. officials have not confirmed how many of the 7,000 hand-held scanners were left behind or whether the biometric database could be remotely deleted.

The U.S. State and Defense departments acknowledged receipt of questions from Zenger for this story on Tuesday. Pentagon spokesman Lt. Col. Anton Semelroth said he would forward them to “the right folks” but did not provide answers by press time. State department press officer Nicole Thompson said the questions were “being worked” inside the agency but also didn’t provide a response. White House Deputy Press Secretary Karine Jean-Pierre did not respond to multiple requests for comment.

Zenger asked all three agencies for comment again Friday morning; none of them answered questions on the record.

“Now that Kabul is taken, operational work has taken a back seat and we’ve turned our focus on counterintelligence,” Nawazuddin Haqqani told Zenger in a mobile phone conversation on Aug. 21. “While most of the brigade is now resting in different madrassas [Islamic religious schools], the Al Isha group is now the principal agency handling this [biometric] data project.”

“We’re in control of the Interior Ministry and the national biometric database they kept. We have everyone’s data with us now — including journalists and so-called human rights people. We haven’t killed a single foreign journalist, have we? We aren’t arresting the families of these people [who are on the blacklist] either,” he said. “But American, NDS [Afghanistan’s National Directorate of Security] and RAW’s [India’s Research and Analysis Wing] puppets won’t be let off. They will always be watched by Al Isha. Those who were barking about having US dollars in their pockets till a few days back — they won’t be spared. They can’t be spared, can they?”

The database, which includes fingerprints, iris scans, and other biographical data, was housed in a white-washed building at the Ministry of Interior in Kabul. “The centerpiece of the program is the Afghan Automated Biometric Identification System (AABIS), administered by about 50 Afghans at the Ministry of Interior in Kabul,” according to a 2011 FBI news release. The U.S. Army issued an official “Commander’s Guide to Biometrics In Afghanistan“ manual in 2011.

The U.S. started with data from some 300,000 Afghans in 2009, mainly prisoners and Afghan soldiers according to NATO, and the biometrics center opened in November 2010. U.S. officials aimed to compile information on as many as 25 million Afghans, roughly 80 percent of the population, Annie Jacobsen, author of “First Platoon: A Story of Modern War in The Age of Identity Dominance” (Penguin, 2020), told National Public Radio last year. The exact number of Afghans covered by the database remains classified.

At first, the U.S. hoped to use the biometric database to spot Taliban infiltrators or catch the makers of roadside bombs, which had claimed the lives of hundreds of American and allied sources since 2001. Later, it evolved into a way to identify virtually every Afghan that U.S. forces hired or visited. By 2014, the U.S. Army was calling its strategy “identity dominance.”

Now that identity dominance belongs to the Taliban. “We are not collecting new data — we already have it,” said Nawazuddin Haqqani. “The group [Al Isha] just keeps an eye that if someone has worked for America or the National Directorate of Security [the former Afghan government’s intelligence agency].” The database is also used to find any person who worked with British, European or Indian intelligence services, he said.

“The matter [data collection and making of the list] is being blown out of proportion by the foreign media and its nothing more than a campaign to malign us,” he said. He contended that the database was used to spare the lives of foreign journalists.

The Al Isha unit has more than doubled in size, from 500 to nearly 1,100 over the past month, he told Zenger, and spread out into many of Afghanistan’s 34 provinces.

Asked about reports that Pakistani intelligence officers were supervising the Al Isha unit’s use of biometric data to interrogate former U.S. allies, Nawazuddin Haqqani didn’t deny the Pakistan connection. “You are not that naive — you know the answer to that,” he said. “But what I can say is, it’s not necessary to train everyone in Pakistan. The Emirs [local Taliban chieftains] are quite capable of training the foot soldiers to handle the equipment.”

This suggests Pakistan’s spy agency, the Inter-Services Intelligence or ISI, has access to America’s biometric database. If Al Isha can identify Indian intelligence sources in Afghanistan, the Pakistanis will pursue them as well.

Asked about details of the data collection, he refused to answer and said: “This is a question which [Taliban political spokesperson Suhail] Shaheen should answer.”

Shaheen declined to comment on the existence of Al Isha, the presence of Pakistani intelligence officers and the use of U.S.-made biometric technology in Afghanistan.

Nawazuddin Haqqani revealed the history and command structure of the Al Isha unit. “The Al Isha isn’t a new thing. It’s one of the three groups under the Khalil Haqqani Brigade,” he said.

The brigade is a military unit of more than 2,000 fighters that is named after Khalil Haqqani, who has a $5 million bounty on his head and leads the Badri 313 unit, which recently mocked the iconic photo of U.S. Marines raising an American flag on Iwo Jima.

Khalil Haqqani is the brother of the late Jalaluddin Haqqani, who mentored Osama Bin Laden and later served as a cabinet minister for the Taliban in the 1990s.

Nawazuddin Haqqani is a member of the Haqqani clan whom Khalil personally put in charge of counterintelligence operations in Kabul. In many ways, Nawazuddin is treated as Khalil’s son. But their exact family relationship is debated among western intelligence analysts and is a sensitive topic that Taliban and Haqqani sources refuse to comment on.

In a different part of Kabul, a 26-year-old former Afghan National Army corps commander was reached on his mobile phone on Aug. 16, hours after the Taliban seized the city.

“Well, I have reached home safely and am with my parents, wife and child,” he said. “But I don’t think I will be here for long. They’re going door to door and scanning everyone with biometric scanners, and they’ll knock on my doors anytime now.”

Asked if he was referring to the Taliban, his words were precise: ”The Al Isha actually.”

The corps commander, who asked that his name be withheld because Al Isha is actively hunting him, says he is in the biometric database because of his volunteer work as a media coordinator with an Afghan nonprofit organization.

“The Afghan Taliban are incapable of handling the biometric equipment or the database” he said. “Every search party is overseen by a Pakistani officer or a member of the Haqqani Network.”

The former corps commander’s phone has since gone dead.