Biden ordered an extension of the eviction moratorium until Oct. 3 after Congress failed to meet his request to legislate one. 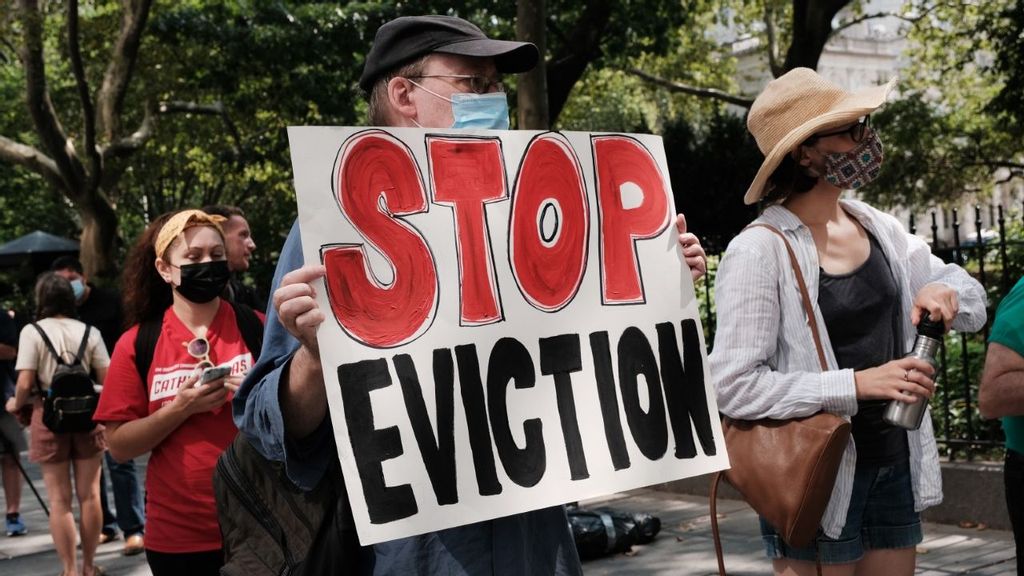 WASHINGTON — The Supreme Court on Thursday ruled that the U.S. Centers for Disease Control and Prevention does not have the power to place a moratorium on evictions, overturning a ban that had been extended a month ago by President Joseph R. Biden Jr. to slow the spread of COVID-19.

The ruling came in a 6-3 decision, with the court’s three liberal justices dissenting.

Biden had on July 30 extended the policy to Oct. 3, acknowledging at the time that it was “not likely to pass constitutional muster” but would give states time to distribute billions in rent relief.

An unsigned ruling from the court said the CDC’s ban on evictions had overstepped authority granted by Congress to enact emergency measures to prevent the rapid spread of disease.

“[T]he CDC has imposed a nationwide moratorium on evictions in reliance on a decades-old statute that authorizes it to implement measures like fumigation and pest extermination,” the unsigned decision said, adding it “strains credulity” that halting evictions fell under the same umbrella.

A dissenting opinion penned by Justice Stephen G. Breyer argued there was no reason evictions should not count, noting the law enabled mandatory quarantine measures, “which arguably impose greater restrictions on individuals’ rights and state police powers than do limits on evictions.”

The Alabama Association of Realtors, along with a group of landlords, challenged the ban in court earlier this year, arguing the CDC overreached and was costing landlords $19 billion a month. Judge Dabney Friedrich, a U.S. District Court judge appointed by former President Donald J. Trump, ruled against the ban in May, but issued a stay on her decision, pushing it to the Supreme Court.

Opponents of the CDC’s moratorium had argued the rights of landlords were being violated because were unable to collect rent on properties with federally-backed mortgages.

“Landlords are in a precarious position,” Atiba Madyun, a political analyst and president of the Madyun Group, a government relations firm based in Washington, D.C, told Zenger. “Many of them have mortgages themselves, on these properties. They’re going to end up going into foreclosure.”

Dean Hunter, the CEO of the Small Multifamily Group, a group representing small landlords, said landlords with large portfolios were largely able to weather the storm of temporary non-payment of rent without resorting to evictions, but said smaller landlords were not in that position.

“Half of the rental housing in the country is provided by small landlords. There’s been substantial harm done to small landlords over the last 15 months,” Hunter told Zenger.

The Biden administration expressed disappointment at the overturning of the moratorium.

“As a result of this ruling, families will face the painful impact of evictions, and communities across the country will face greater risk of exposure to COVID-19,” Biden’s press secretary, Jen Psaki, said in a White House statement after the court’s decision was announced.

The overturned 60-day eviction moratorium, which was set to expire Oct. 3, was issued by the CDC primarily for renters in communities with substantial rates of COVID-19 transmission. It covered 90 percent of U.S. renters, including about 6.5 million households currently behind on payments.

Yet the Supreme Court’s six conservative justices argued even that reasoning was no longer valid.

“Vaccine and rental-assistance distribution had improved since the stay was entered, while the harm to landlords had continued to increase,” said the unsigned majority opinion.

The CDC’s Aug. 3 extension came after weeks of buck-passing between Congress, the Supreme Court, and the Biden administration over both the expiration date and legality of an extension.

After Judge Friedrich ruled that the CDC had exceeded its power in issuing the initial eviction ban, the case arrived at the Supreme Court in June. The Supreme Court narrowly ruled 5–4 to allow the initial ban on evictions to take its course, allowing it to continue until the July 31 expiration.

“In my view, clear and specific congressional authorization (via new legislation) would be necessary for the CDC to extend the moratorium past July 31,” wrote Justice Brett Kavanaugh, who cast the deciding vote, in a statement following the late 5–4 ruling on June 29.

Two days before the moratorium was set to expire, Biden asked Congress to approve a one-month extension. Majority Leader Steny Hoyer (D-Md.) tried to pass the measure via unanimous consent, but lawmakers were unable to gain enough votes before leaving for a seven-week recess. A five-day protest at the U.S. Capitol, led by Rep. Cori Bush (D-Mo.) then put pressure on Biden to act.

“A progressive is somebody who’s constantly fighting to make life better for the people who often make the least, often don’t have access to resources, oftentimes are the ones that are forgotten, especially the ones that are on the verge of eviction,” Rep. Jimmy Gomez (D-Calif.) told Zenger on the steps of the Capitol after Biden’s announcement of the moratorium extension.

Some states — including California, New Mexico and New York — have already enacted their own evictions moratoriums, which will not be impacted by the Supreme Court’s ruling.

Although the funds are there, states have been slow at getting aid to renters and landlords. Only $5.1 billion in aid, out of the $46 billion allocated by Congress, has been distributed so far, according to an Aug. 25 press release from the U.S. Treasury Department.

The Aug. 3 extension was meant to accelerate states’ efforts to distribute funds from the Emergency Rental Assistance program in order to prevent families from being out on the street by October, which now becomes the primary focus of federal and state relief efforts.

Low-income renters, in particular, often face challenges in collecting necessary paperwork and identification, but lawmakers have called for the aid to get to its intended recipients fast.

“There are people in my district that are reaching out saying how do we access these resources that still don’t know,” said Rep. Bush at a press conference at the Capitol following the CDC’s announcement in August. “We have to continue to keep that pressure going, because if we don’t, those localities, those states may not be as forceful about pushing that money out.”