‘Smell Of Fear’ May Help Protect Crops From Pests 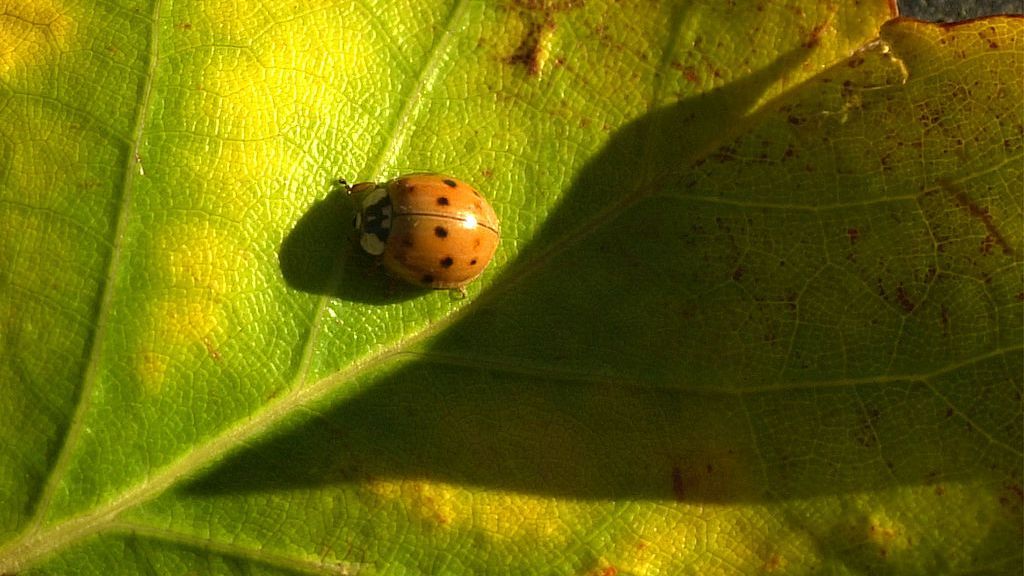 The U.S. Department of Agriculture introduced Asian lady beetles like this one into the United States in the 1970s to keep aphids from destroying crops, but an unlimited food supply in the area caused a population boom. The smell they produce frightens destructive aphids. (Mike Simons/Getty Images)

As insects become more resistant to pesticides, the “smell of fear” some predators produce may someday be harnessed to repel and disrupt destructive insects naturally.

A team of researchers found that the synthesized scent of a ladybug had measurable effects on their natural prey — aphids — in the lab, and the next step will be field tests.

“It is not uncommon to use our senses to avoid risky situations. If a building was on fire, we as humans could use our senses of sight or smell to detect the threat,” said Sara Hermann, an entomologist at Pennsylvania State University. “There is evidence for such behavioral responses to risk across taxa that suggest prey organisms can detect predation threats, but the mechanisms for detection aren’t very well understood, especially with insects.”

“As we’re trying to feed a growing population, we’re in need of increased crop productivity to a degree we hadn’t had in the past,” said fellow Penn State researcher Jessica Kansman. She sees a future for using the “smell of fear” in organic agriculture and gardening.

“We’re always on the hunt for new, sustainable pest-management strategies as we are moving to reduce pesticide use, since pesticides can harmful effects on human health and on beneficial insects such as pollinators and predators that we want to maintain,” she said.

Plant-eating bugs pose threats to farmers and gardeners, prompting the use of pesticides. In the study led by Hermann, predator insects emit odors that their herbivorous prey can detect. This, in turn, changes pests’ behavior and even their physiology to avoid being eaten. The researchers have found a way to capture the “smell of fear” to obviate the need for harsh chemicals.

They presented their findings at the fall meeting of the American Chemical Society (ACS).

“Most people are familiar with ladybugs, and unfortunately may be familiar with aphids if they have a garden or household plants. But what they don’t know is that aphids are present in nearly every crop worldwide and are a massive pest,” said Kansman, also of Penn State.

Kansman pointed out that aphids have an incredible capacity to clone themselves, causing their populations to boom, and they’re also transmitters of plant diseases.

“Insects rely on olfactory cues to find food, mates and places to live, so this is a great opportunity to investigate how to use these smells to manipulate their behavior,” she said.

Aphids are a highly destructive and increasingly resistant to insecticides. But they are the favorite food of the familiar ladybug, also known as the ladybird beetle, a favorite among gardeners seeking a natural alternative to pesticides.

Hermann’s research shows that herbivorous insects such as aphids avoid fields and gardens if they smell predators nearby. In addition, exposure to ladybugs’ odor causes aphids to slow their reproduction rates and increase their ability to grow wings, both of which are behaviors designed to avoid threats.

By using gas chromatography-mass spectrometry, the researchers identified and extracted the odor profile from live ladybugs. The method allowed them to separate and identify the various components of ladybugs’ odor. Hooking up the tiny antennae of live aphids (from which they detect smells) to an electroantennogram machine and exposing them to each individual odor the predator emitted to see which compounds they detected, they could see how the aphids responded to each.

The level of the aphids’ reaction was measured based on the signal picked up by the machine. Aphids showed the strongest reaction to different types methoxypyrazines produced by the ladybugs. Having identified the various compounds, the researchers created a blend of odors in an essential oil diffuser that will spread the scent across a garden or field, thereby “bottling the smell of danger,” Kansman said.

The team plans to conduct field tests of their scent diffusers to determine if the effects on aphids and ladybugs resemble what they saw in the lab. Hermann and Kansman also want to determine the dispersal area of the diffusers, and whether they could be applied to other pests and predators, as well as various types of crops. In addition, they are collaborating with a manufacturing company to design special diffusers for eventual commercial use by both farmers and gardeners.

The stakes are high for farmers. For example, cotton growers in Alabama and Georgia lost millions of dollars in 2017 to the cotton leaf curl virus, which is spread by aphids. It is again posing a problem this year.

A synthesized aphid-repelling ladybug smell could be accompanied by a strategy being studied in Kansman’s lab.

“If we can we use it as this push-pull mechanism,” she said, “you can push insects out of the crop that you’re working in using a repellent odor — potentially this lady beetle odor — and pull them into an extra planting that you have around the border of your crop or into another trap crop that is attractive to the pests.”