The conflict resulting from the scramble for limited arable land, could undermine local efforts against Boko Haram insurgency. 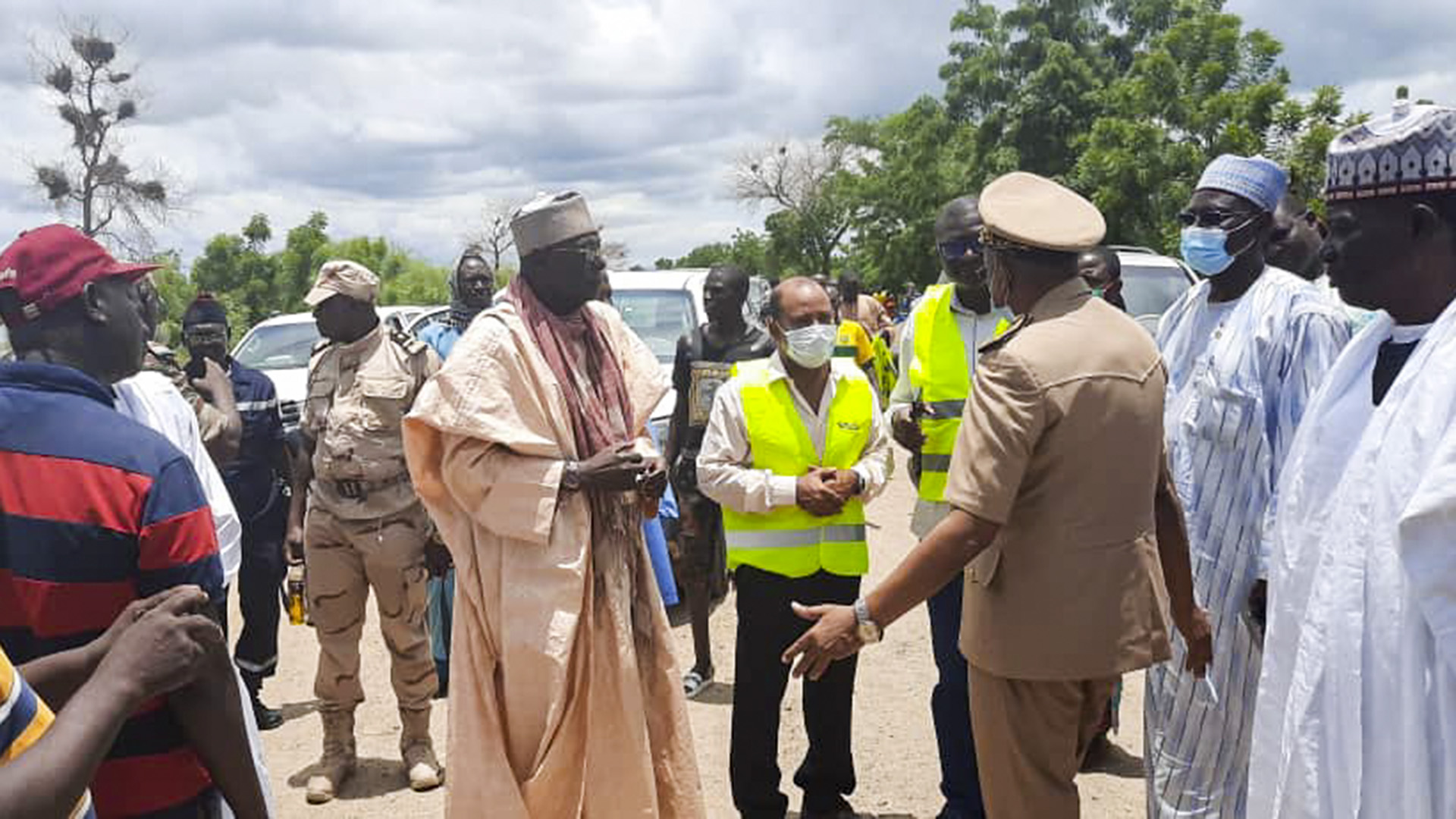 The governor of Cameroon's Far North Region, Midjiyawa Bakari, met with representatives of the belligerent communities following the inter-communal clashes that killed at least 32 villagers and wounded more than 70 others. (Tizi Pierrette)

LOGONE-BIRNI, Cameroon — Zilna Mahamat, 53, was part of a team dispatched to retrieve their Mousgoum tribesmen killed during a conflict with Choa Arab herders in northern Cameroon in early August 2021.

But he nearly met his doom when Choa Arabs fired gunshots at them, believing they were on a revenge mission.

“They shot my right thigh as we went to carry the corpses of our brothers,” Zilna told Zenger News.

“We had to abandon the corpses there. As we ran for our dear lives, two people among us were shot dead. We were eight of us wielding arrows. We weren’t going to attack them but rather understand what was happening. Those killed were our relatives. Their deaths have caused us so much pain, especially since they left behind children and widows.”

The conflict between the two communities left 32 people dead and more than 70 others injured. Over 11,000 Cameroonians fled the conflict to neighboring Chad.

The Choa Arabs are predominantly cattle-keepers, while the Mousgoums are fishermen and farmers.

The deadly clashes stemmed from a seemingly minor problem: drowning a few heads of cattle in an artificial fishpond belonging to a member of the Mousgoum community.

But the incident exposed a growing divide between the two communities, which dominate Cameroon’s Far North Region.

During the rainy season, the Mousgoums usually dig artificial fishponds, which enable them to stock fish all year round.

However, their Choa Arab neighbors view the ponds as deathtraps for their cattle.

“A Choa Arab herder led his flock to drink water [from the artificial fishpond], and a few of them drowned,” Abelegue Alliance Fidele, a humanitarian worker and researcher at Thinking Africa in Cameroon’s Far North Region, told Zenger News.

“The herder blamed the Mousgoum fisherman for the death of his cattle since he owned the pond. The two started fighting, which degenerated into inter-communal clashes.”

Zilna told Zenger News he spent FCFA 35,000 [$62] to have the bullets in his leg removed in hospital.

“We forgive the killers of our brothers. We hope that this will never happen again.”

Another survivor of the attack, Bilar Mahamat, 29, said the attackers hit him with bullets around his chest.

“It is difficult for us to bear the loss of our brothers.”

In recent years, Cameroon has recorded ethnic clashes in its northern and northwestern regions, often resulting in dozens of deaths and the razing down of villages.

“This is not the first time that such conflicts are taking place,” Damian Akara Tatazo, a senior lecturer of History at the University of Maroua, told Zenger News.

“We have had conflicts in the past among the Choa Arabs, Mousgoums, and even the Kotokos in northern Cameroon. This is similar to the perennial farmer-grazer conflict in some parts of Northwestern Cameroon. The conflicts stem from the scramble for natural resources, mostly arable land, which is scarce due to climate change. Each group is fighting to occupy the limited geographical space for economic activities. The conflict has no linguistic, religious, political or tribal coloration.”

Following the conflict, the senior divisional officer for Logone and Chari Division of the Far North Region, Ndongo Ndongo Jean Lazare, banned gatherings of more than ten people and the movement of motorbikes between 6 p.m. and 6 a.m.

The governor of the Far North Region, Midjiyawa Bakari, set up a commission to look into the causes of the conflict and suggest lasting solutions.

“This is not an inter-tribal clash between Choa Arabs and Mousgoums,” Midjiyawa told Zenger News.

The fighting occurred in the same area where Boko Haram attacks killed 13 soldiers in July 2021, fueling fears it could create cracks for the insurgents to strike again.

“When it wants to strike, it doesn’t choose whether you are a Kotoko, a Choa Arab or a Mousgoum — the need therefore for everyone to join forces and fight this common enemy.”

Kabir, a Choa Arab, is also a member of a commission appointed by Bakari to solve the conflict.

He said Logone and Chari is a sensitive division in Cameroon.

“It is an area where we have Boko Haram attacks and other forms of insecurity within the Lake Chad Basin as well as arms trafficking. If the conflict was allowed to drag on, it could permit people living afar to get involved.”

“Relative calm has returned, but there is still tension in the air, and this exposes the region to more danger. Boko Haram can exploit the conflict as a weakness to penetrate the area. It is incumbent on the state to stamp its presence in the region.”