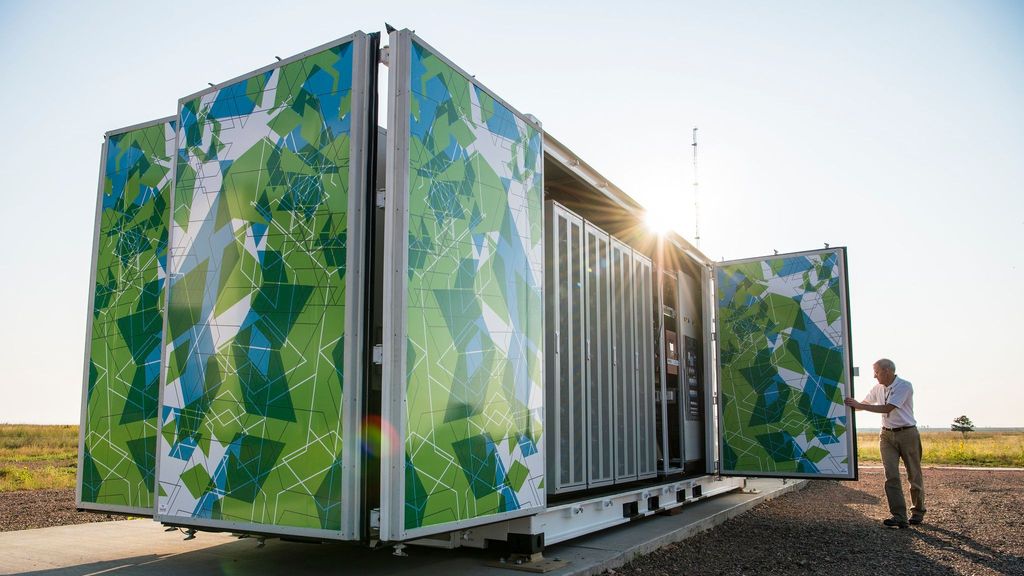 This Flex-manufactured enclosure holds a one megawatt lithium-ion battery system used by the National Renewable Energy Laboratory at its National Wind Technology Center in Arvada, Colo. (U.S. Department of Energy)

California, sometimes forced into rolling blackouts due its residents’ and businesses’ tremendous thirst for energy, is nonetheless unable to capitalize on more than a million megawatts of solar and wind power it generates.

California is seeing an increasing amount of “curtailments,” the U.S. Energy Information Administration reported on Aug. 24, in which grid operators either don’t take or redirect electricity generated from the state’s growing solar and wind energy resources.

“Curtailing renewables results in lost opportunities for clean resources to generate all of the carbon-free power that otherwise could be produced,” said the California Independent System Operator, which oversees much of the state’s electricity distribution. “As more renewables come onto the system, oversupply during the middle of the day, when the sun is brightest, is happening more frequently, and curtailing of solar resources is becoming a common practice.“

Overall, California had to curtail about 5 percent of its utility-scale solar production in 2020, totaling 1.5 million megawatt hours, according to the administration’s report. Most curtailment occurs in the spring months of March, April and May, when bright sunshine feeds the solar capacity, but the state’s crisp weather leaves little need for air conditioning.

Curtailing can sometimes mean turning off solar and wind production to the grid, but it more often means selling electricity at below-rate costs to other nearby grids, the California grid operator said.

However, solar resources were pushed to their capacity in August 2020, when the state didn’t have enough electricity to meet a summer heat wave and had to resort to “rolling blackouts” to manage its grid capacity.

To address the problem of intermittency — in which renewable energy sources are tied to environmental factors like wind or sunshine — utilities are scrambling to install battery capacity to meet the coming influx of renewables. Meanwhile, the U.S. Energy Department has made battery technology development a key platform as it seeks a “Moonshot” breakthrough.

In another recent report, the Energy Information Administration reported on Aug. 20 a 35 percent increase in battery capacity additions to the power grid in 2020. That jump is just the first step in what is projected to be rapid growth in utility scale battery deployment.

Much of the recent growth in new storage capacity comes from battery systems connected to solar projects, Nalley noted. The report showed battery power on the grid has tripled over the past five years and is expected to add more than 10-times the current capacity by 2023.

To meet the growing need for energy storage on the electric grid, the Department of Energy is looking to fund breakthrough technology that evokes the NASA missions of the 1960s.

Like the “Moonshot” program that put man on our planet’s nearest neighbor, the department’s “Energy Earthshots” program seeks to fund breakthrough battery technology. Instead of flying high, the government agency is looking to go long, announcing a goal in July to improve battery capacity duration by 90 percent, a key issue requirement for improving grid energy storage systems.

“We’re going to bring hundreds of gigawatts of clean energy onto the grid over the next few years, and we need to be able to use that energy wherever and whenever it’s needed,” Energy Secretary Jennifer M. Granholm said in a statement.

While there are several types of batteries the Energy Department is considering for funding, including electrochemical, thermal or chemical carrier solutions, the current best duration energy storage solution is mechanical.

Pumped-storage hydropower, where water is pumped to an elevated position during peak hours and later used to generate electricity through a gravity-assisted turbine, provides 95 percent of long-duration energy storage on the U.S. electric grid, the Environmental and Energy Study Institute reported.

In a 2019 report on electricity-storage technology, the group noted that while pumped-storage hydropower offered longer storage times, they were generally large projects that can be difficult to build, while lithium-ion and utility-scale battery solutions offer more flexibility and easier installation, despite their limited energy retention.

As the need for energy storage grows along with the installment of new renewable energy facilities, leaders in the battery industry are working more closely with renewable energy generators. Earlier this week in Washington, D.C., the utility-scale battery industry’s main organization, the U.S. Energy Storage Association, voted to merge with the American Clean Power Association, a newly formed group built out of what was once the American WInd Energy Association.

“Our clean-energy future depends on deploying both energy storage and renewables at scale,” said Jason Burwen, interim CEO of the U.S. Energy Storage Association, in a statement after the merger’s approval. “We rise faster together.”