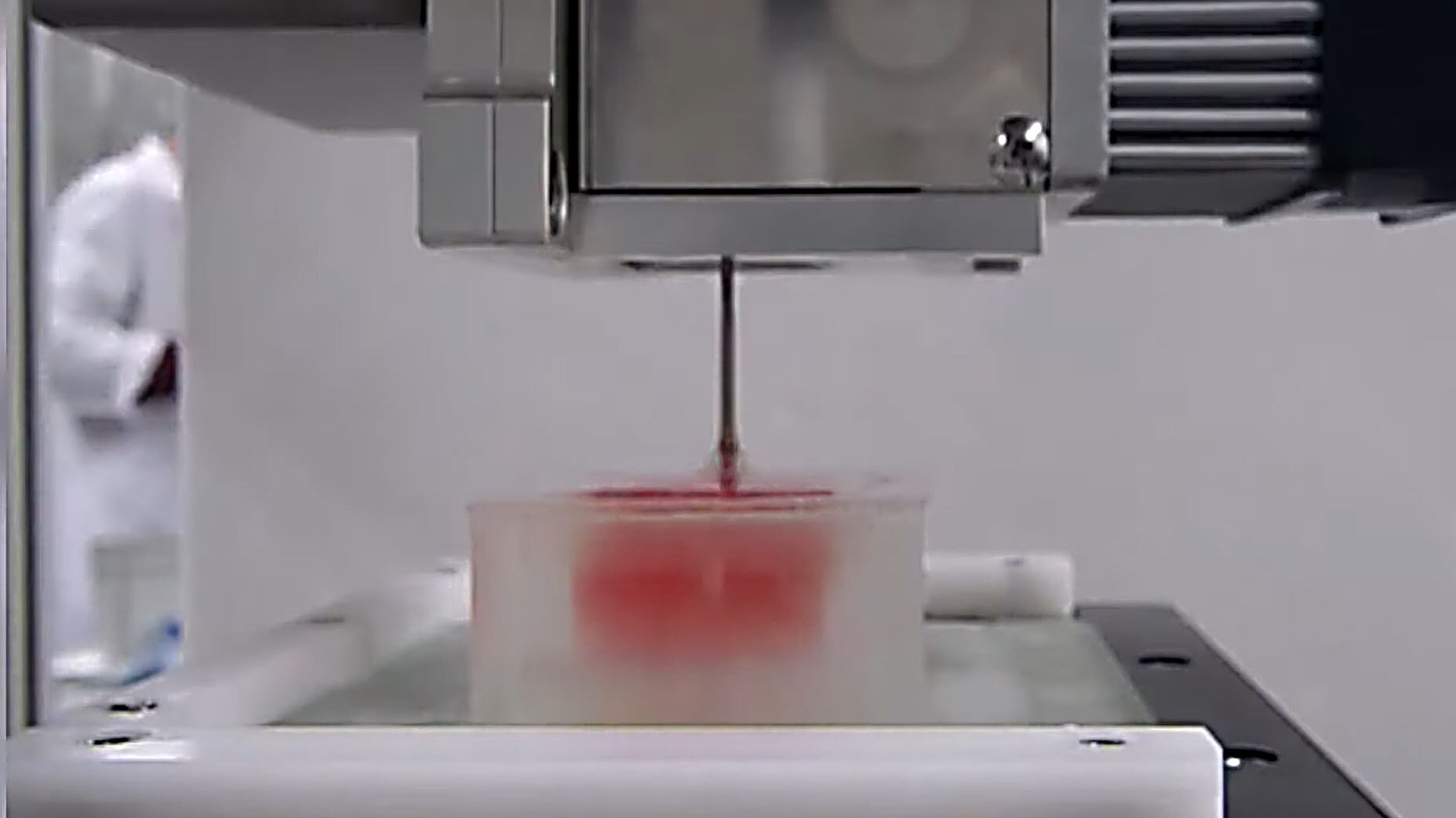 A 3D laboratory printer in Japan is assembling meat-like fibers into a form of expensive Wagyu steak with living tissue grown from stem-cell lines. (Osaka University/Zenger)

Scientists can now print their meat and eat it too.

The bioprinted meat closely resembles the conventional variety, but it’s experimental and not ready for human consumption. “Since the demonstrated cultured steak-like tissue is a small piece and inedible, further elaboration will therefore be required,” researchers from Osaka University said.

They said they had a long way to go to achieve “printing scalability, edibility of the culture and cell-printing-related materials.”

Their research was published in the journal Nature Communications on Aug. 24.

Wagyu beef, the product of Japanese cattle by the same name, is famous for its “marbling” — what the Japanese call “sashi.” Its fine patterns of fat and protein distinguish it from coarser American beef. Prime cuts of Wagyu can cost $100 to $1,000 at retail.

“By improving this technology, it will be possible to not only reproduce complex meat structures, such as the beautiful sashi of Wagyu beef, but to also make subtle adjustments to the fat and muscle components.,” said Michiya Matsusaki, a senior author of the paper.

The bioprinting technology can be seen in a video from Osaka University.

The production of the “steak” begins with stem cells that are isolated from both muscle and fat tissue of cows. These stem cells are cultured to grow into any type of cell scientists need to create the meat-like result, they said.

At the 3D bioprinting stage, scientists organize the resulting muscle, blood vessels and fat, and then slice the final product into traditional steak-like shapes. They call it “tendon-gel integrated bioprinting.”

Osaka University said in a press release that this technology “may help usher in a more sustainable future with widely available cultured meat.” That’s because lab-printed meat doesn’t generate greenhouse gas emissions in the same quantities that come from livestock farming — particularly the methane gas that cattle emit while they digest their food.

The Food and Agriculture Organization of the United Nations reported in 2006 that agriculture was responsible for 18 percent of the total release of greenhouse gases worldwide. The organization’s report concluded that 62 percent of those emissions could be traced back to cattle.

More recently, however, the United States Department of Agriculture’s research arm published a paper in the journal Agricultural Systems with a dramatically different result.

Government researchers found that U.S. beef cattle production contributes just 3.3 percent of all greenhouse gas emissions attributable to the United States. They traced more than half of the total during the year 2016 — 56 percent — back to transportation and power generation. All of American agriculture was responsible for 9 percent, they reported.