The largest of the sea stars, it has been disappearing since the outbreak of Sea Star Wasting Disease in 2013.
By Martin M Barillas August 26, 2021
Facebook
Twitter
Linkedin
Email 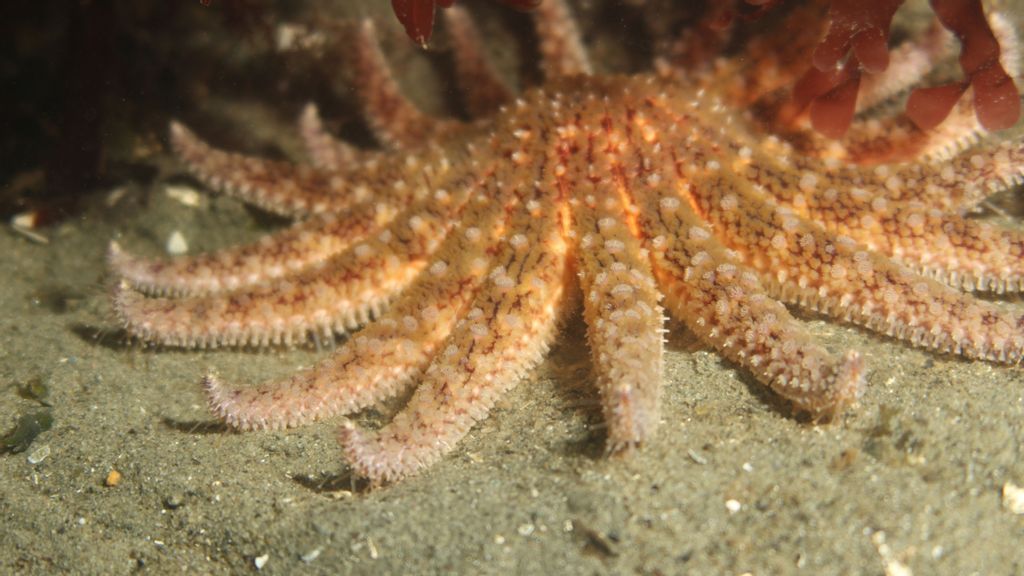 A new study offers little hope for the recovery of the endangered sunflower sea star, which is now nearly extinct throughout 99 percent of its former range. The largest of the sea stars, it has been disappearing since the outbreak of Sea Star Wasting Disease in 2013.

Using divers, submersible vehicles and shore observations, the authors of the international study found that mass mortality events are “increasing with climate change.” This has contributed to the die-off of the sunflower sea star (Pycnopodia halianthoides) but the “magnitude, timing and triggers are often poorly resolved.”

Scientists found that this key marine organism is “functionally extinct (greater than 99.2 percent decline) from Baja California, Mexico, to Cape Flattery, Washington State, and exhibited severe declines (greater than 87.8 percent) from the Salish Sea to the Gulf of Alaska.”

Hamilton, a PhD student at Oregon State University who studies sunflower sea stars and kelp forest ecology, started studying the marine species after the onset of the die-off. She has never seen one outside a laboratory environment.

“We know this situation doesn’t look good, but we’re hoping that this will be a launching pad for funding, attention and other things we need to do some recovery efforts,” Hamilton said, “and protect the remaining stars we have.

“In some areas we should move ahead with restoration/recovery efforts, captive breeding or something like that, but in the more northern areas, of British Columbia and Alaska, listing these species as endangered [and] habitat protection, this paper suggests, is a two-prong strategy to protect those that are still here and think about what to do where we’ve already lost them.

“We saw this disease cover the whole western coastline of North America in two to three years,” she said. “The pace at which it spread makes it really hard for me to think the cause was anything than some kind of disease that can be passed along. But it could be a lot of things.

“The leading hypotheses are that it is a virus or a bacterial proliferation on the surface of their skin, which causes anoxia — low oxygen levels. But that reflects an unfortunate reality in that not many people care about sea stars. They are not important commercially, or charismatic as humpback whales for instance,” she said.

“It’s been one of the worst die-offs in recorded history: The fact that eight years later and that we don’t know what caused it is a really serious problem, and it needs to be identified before we do any active recovery or restoration,” Hamilton said.

Sea Star Wasting Disease (SSWD) appears to be worse in southerly climes, her study indicates. That means its “severity may stem from an interaction between disease severity and warmer waters.”

The authors “found no evidence of population recovery in the years since the outbreak. Natural recovery in the southern half of the range is unlikely over the short term. Thus, assisted recovery will probably be required to restore the functional role of this predator on ecologically relevant time scales.”

So far, the study says, the cause of SSWD remains unidentified. Low oxygen levels at the surface of sea star skin, from where they breathe, has been blamed, as has the sea star-associated densovirus.

However, the study stated that the “relationship between temperature and SSWD is unresolved.”

“In laboratory studies, the lesion growth rate increased with increasing temperature, but evidence for warm temperatures triggering SSWD is mixed.”

The authors found no clear evidence of a rebound for the sea stars since 2017. From Baja California to Washington State, their population has “flatlined,” the authors wrote. They conclude that protecting survivors in northern regions will be critical for their recovery. Protecting them from trap and trawl fisheries, where they are often bycatch, “should be considered in recovery planning.”

Sunflower sea stars grow as large as three feet wide and weigh as much as 13 pounds. These brightly colored sea stars have as many as 24 arms and more than 15,000 tiny tubular feet that allow them to move on the sea bottom and seize prey. Voracious predators, they swallow urchins and bivalve mollusks such as mussels. They can live as long as 65 years.

All 20 known sea star species began showing signs of a massive die-off along the western coasts of Canada, Mexico and the United States in 2013. In just days, they showed spreading lesions and died.

The sunflower sea star is particularly susceptible to the wasting disease. One study determined that they showed a decline of 100 percent over a 2,000-mile range.

Sea stars are a keystone species and top predator in the marine environment. When sunflower sea stars died off, the population of their primary source of food, the Pacific purple sea urchin, exploded off Oregon by 10,000-fold between 2014 and 2019, to more than 350 million individuals.

Climate change, nevertheless, has been blamed for sea star die-off. About the same time as the sea star die-off in 2013, an unusual warming event was noted along the West Coast. Dubbing it “the blob,” scientists initially thought the warming event activated and worsened a preexisting virus that unleashed densovirus, which specifically attacks the sea stars. This theory appeared to be confirmed when sea stars in public aquariums using piped-in seawater also died, suggesting there were pathogens in the water.

Now scientists, led by researcher Jason Hodin at Friday Harbor Labs in Washington State’s San Juan Islands, are trying to raise a new generation of sea stars from the larval stage, in a laboratory.

“We’re hoping that our efforts can help in the process of recovery of the sunflower sea star and, ultimately, recovery of the health of ecosystems like the kelp forests that are under threat right now,” Hodin stated in a University of Washington report.