In “Little Demon,” the actress plays the voice of a mother impregnated by the devil. 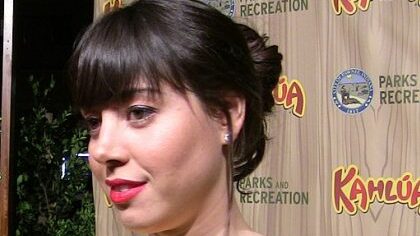 Award-winner Aubrey Plaza will serve as a voice actress and one of the executive producers of the animated FXX series. (Kristin Dos Santos)

Plaza plays a mother who gets impregnated by the Devil (Danny DeVito). She attempts to live a normal life with her teen Antichrist daughter (Lucy DeVito) in Delaware. The pair’s efforts for normalcy are foiled by monstrous forces, including Satan himself, who yearns for custody of his daughter’s soul.

FXX is a cable channel, part of the Disney-owned FX Networks that cater to a young adult audience.

Plaza is best known for her role in the sitcom “Parks and Recreation,” which won a Peabody Award in 2011. The actress of Puerto Rican descent has earned accolades for her work in mainly independent movies, doing both dramatic and comedic roles.

Earlier this year, she received the Hollywood Critics Association’s Acting Achievement Award for her performance in the experimental dramedy “Black Bear.”

Three years ago, Plaza won the Film Independent Spirit Award for best feature for “Ingrid Goes West,” which she starred in and co-produced.

The comedienne landed her first starring role in the 2012 comedy “Safety Not Guaranteed,” for which she received the Young Hollywood Award for breakthrough performance by an actress and the American Latino Media Arts (ALMA) Award for favorite movie actress in a comedy.

FX Productions is behind “Little Demon,” and Steve Levy is among the project’s producers.