VIDEO: You Want Flies With That? Paragliding Chef Cooks Cheeseburger At 2,000ft

Grilling and enjoying the sky-high meal was both satisfying and safe.
By Feza Uzay August 25, 2021
Facebook
Twitter
Linkedin
Email 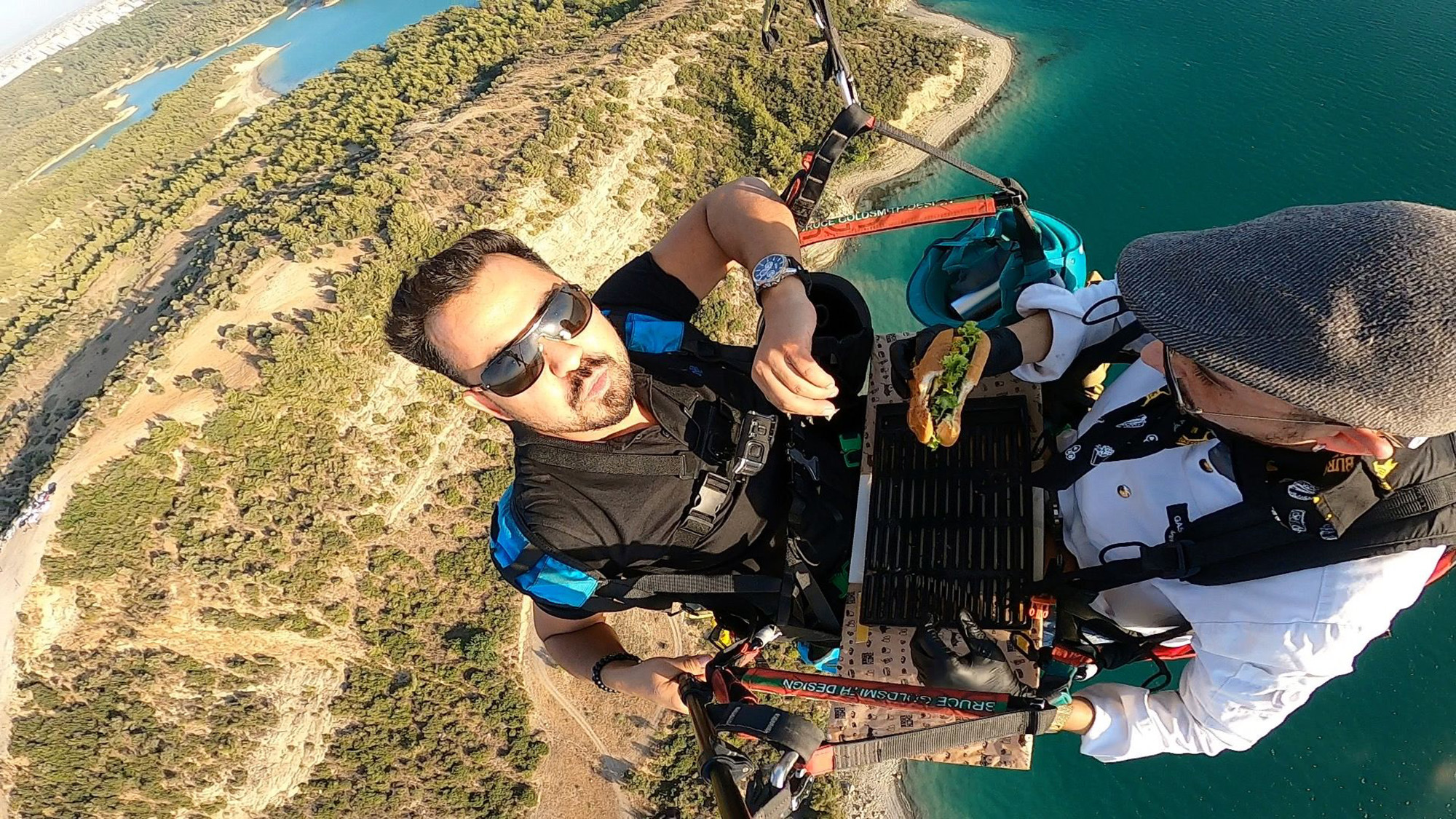 A chef grilled a hamburger for him and the man who took him on a paragliding adventure over the southern coast of Turkey. (Onur Avcu/Zenger)

A chef heated a grill and cooked a cheeseburger on it while paragliding at close to 2,000 feet above the southern coast of Turkey on Aug. 16.

Chef Yigit Ugur Aydal wanted to paraglide over the lake at Seyhan Dam in Menekse in the district of Saricam. So he contacted qualified paraglider Onur Avcu.

Avcu agreed to take him on the trip — but with one condition. He had to fry him a burger during the flight. The chef agreed and brought along all the necessities: a grill, kitchen blowtorch, burger patty, tomatoes, cheese, lettuce and pickles.

The pair then took to the air for the ultimate outdoor dining experience.

A video shows Aydal heating the grill and cooking the meat while flying above the picturesque coastline. He also melts the cheddar cheese with the blowtorch and places the other ingredients on the bun.

During the flight, which lasted some 35 minutes, the two shared the cheeseburger before safely touching down.

“I am sure that it was a unique and memorable flight for Yigit, but it also made me feel special because the meal was prepared for me. Having a professional chef cook a meal in the sky for me was really something,” Avcu told Zenger.

“I have been paragliding professionally for five years,” Avcu said. “I am an experienced pilot licensed by the International Aviation Federation. However, I mostly take part in flights for fun to get rid of the stress of daily life.”

Avcu called the trip “one of my most unusual flights. It required all my experience because the passenger’s safety was of utmost importance to me.”

The sky-high meal may have been inspired by a previous experience.

“Earlier, a passenger said he was hungry just before the flight, so when we took to the sky, I gave him a doner kebab that was in my backpack for lunch. His astonishment in the sky was incredible,” Avcu said.

But he was quick to point out that such adventures are rare.

“For their own safety, anyone interested in paragliding should always ask about the instructor’s experience and paragliding certificates first,” Avcu said. “No one should risk their life for such an experience.”