VIDEO: New Jag Off-Roader? No – Just A Pair Of Four-By-Paws Holding Up The Traffic 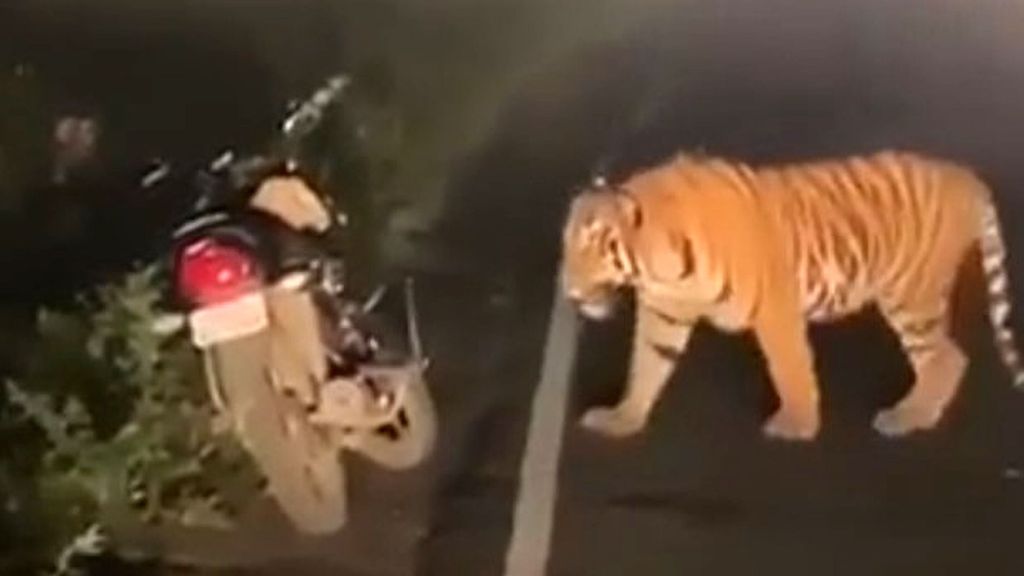 One of two tigers that emerged from a wooded area crosses the highway in western Maharashtra state, India, bringing cars to a halt. (Anand Mahindra/Zenger)

Welcome to my jungle, two tigers might well be saying as they roam up and down a road in India, holding up cars.

Indian tycoon Anand Mahindra posted video dated Aug. 19 on Twitter, saying, “So our XUV isn’t the only big cat on the highway… Magnificent” showing the big cats that emerge from a wooded area onto the Panchgani-Mahabaleshwar road in India’s southwest.

One of Mahndra’s companies manufactures the Mahindra XUV500, a seven-seater SUV.

The video has gone viral with nearly a quarter of a million views.

Headlights seen further down the road indicate that at least one other car was also stopped as its driver waited for the animals to pass.

Indian tigers or Royal Bengal tigers (Panthera tigris tigris) are found in India, Nepal, Bhutan and Bangladesh, according to the World Wildlife Foundation. Indian tigers have an orange coat with broad black stripes, black ears, each with a white spot on the back, powerful forepaws, and a long banded tail.

They grow between 7.5 feet to nearly 10 feet long and weigh anywhere between 298 pounds and 617 pounds. Their average life span in the wild is about 14 to 16 years.

Hunting and human population growth are the main threats to Bengal tigers, according to the World Land Trust.

Mahindra is chairman of the Mahindra Group, a multinational conglomerate with headquarters in Mumbai. Its automobile firm, valued at nearly $20 billion, is a major competitor of Tata Motors in India.

The Mahindra Group also includes defense, farming, energy and agricultural industries. It has interests in the aerospace industry, as well.

«Previous Post
US Aims To Complete Evacuation From Afghanistan By Aug. 31»Next Post
US State Department Are In Discussions With Taliban On Future Control Of Kabul Airport