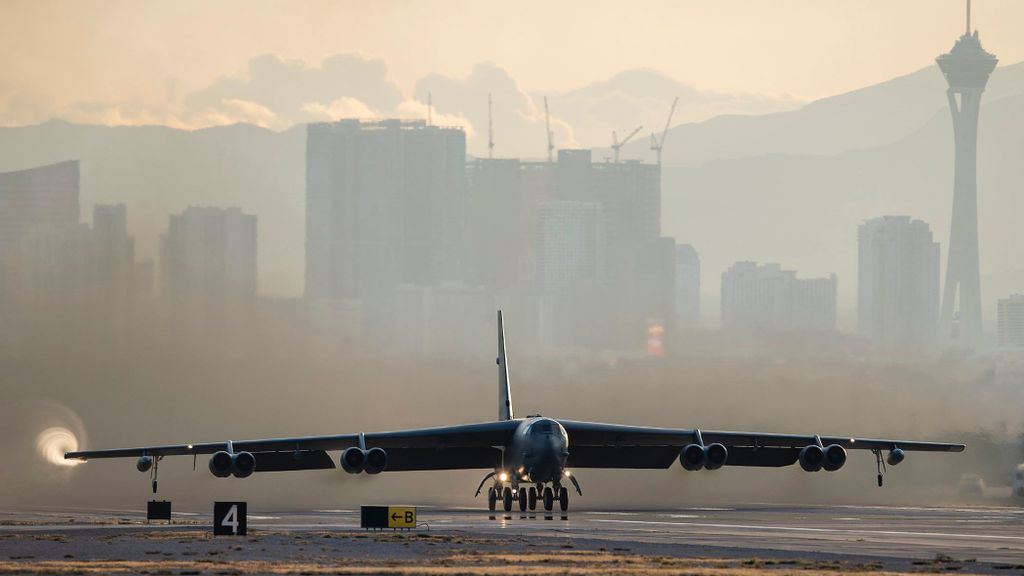 A B-52H Stratofortress bomber takes off from Nellis Air Force Base in Nevada on Nov. 21, 2019. The aircraft can deliver the B83, the U.S.’s largest bomb and one that some lawmakers say may no longer be needed. (U.S. Department of Defense/Air Force Airman 1st Class Bryan Guthrie)

As Congress is set to debate whether to build a new generation of nuclear weapons, a conference halfway around the world is shining a light on how adversaries like Russia are attempting to circumvent the United States’ worldwide influence and conventional military dominance.

When the U.S. House of Representatives moves forward with a defense spending bill next week, one of its considerations will be what kind of nuclear arsenal should the U.S. fund. Meanwhile, some are pointing to a meeting in Kiev, Ukraine, this week that highlights how Russia has used unconventional military and political strategies to not just take control over the Crimea, but also to prevent a U.S. response.

“The Russian buildup in Crimea is not defensive, but offensive,” said Stephen Blank, a senior fellow at the Foreign Policy Research Institute and former director of Russian studies at the U.S. Army War College, during an Aug. 23 webinar hosted by the Mitchell Institute for Aerospace Studies. “We have to be aware of this threat and take countermeasures to deal with it.”

Meanwhile, some U.S. lawmakers are asking whether expensive nuclear weapons are needed to counter the threat posed by Russia and China. On Aug. 9, the top Democrat on the House Armed Services Committee asked President Joe Biden to include an independent financial review of new ground-based nuclear missiles as part of the government’s regular review of its nuclear arsenal.

In the letter to Biden, Washington Democrat Rep. Adam Smith said the review should also analyze whether it is even necessary to maintain a land-based leg of the triad. (The U.S. nuclear strategy has long counted on a “triad” approach, which relies on maintaining operational weapons on land through intercontinental ballistic missiles, at sea on submarines and in the air through a heavy bomber fleet of B-52s and B-2 stealth bombers.)

However, as the U.S.’s fleet of Minuteman III  intercontinental ballistic missiles ages past its useful lifespan, some U.S. lawmakers are asking if the price to modernize the ground leg of the triad is too high, particularly in light of changing threats.

The threat of other nuclear powers building their arsenals is leading the U.S. to commit to costly new weapons systems, while also maintaining a current arsenal that includes weapons that have “questionable operational relevance in today’s environment,” wrote wrote Smith, citing as an example the B-83 gravity bomb, the U.S.’s most powerful nuclear device. (Such bombs have a yield of 1.2 megatons, which is 60 times more powerful than the bomb the U.S. dropped on Nagasaki, Japan, at the end of World War II.)

“When asked about the requirements for all of these systems, the Department of Defense quickly points to Russian and Chinese investment in nuclear weapons, which I fear leads us down the path to a newly invigorated and very dangerous arms race,” Smith wrote.

On Aug. 23, Ukraine hosted the inaugural summit of the Crimea Platform, an international diplomatic meeting designed to address Russia’s continued presence in the Crimean peninsula. Russia’s 2014 invasion and subsequent annexation of the Crimea, a peninsula in Ukraine’s south on the Black Sea has sparked international condemnation, including a December 2020 resolution by the United Nations General Assembly.

That invasion, which began with non-uniformed covert troops, is an example of the so-called “gray area phenomena,” in which nations like Russia and China conduct military actions that are just short of attracting a response from the United States.

Blank said that Russia has been developing smaller, lower-yield “tactical” nuclear warheads that are designed to be used against troops and military installations, as opposed to high-yield weapons that are designed to level cities. Seeing the United States as an unbeatable force through conventional means, Russia, as well as increasingly China, see development of nuclear weapons as the only way to curb the dominance of the U.S. military.

“Nuclear weapons create a screen for Moscow behind which they can act with impunity by conventional means,” Blank said.

Russia is building a series of “dual use” capable vehicles like attack submarines which can deploy both conventional and nuclear weapons. While Russia maintains a sizable fleet of intercontinental nuclear missiles capable of striking the U.S., it continues to develop new weapon systems to help “undermine strategic stability, Blank said.  Russia was also working to build a naval base in the Sudan, giving it expanded access to the Indian Ocean and its neighboring U.S. interests and allies.

Given Russia’s efforts to extend its control into places like Crimea and Africa, it would be dangerous to reduce or eliminate parts of the U.S. weapons arsenal, especially as it continues to develop its weapons stockpile, Blank  said.

“If we removed the land-based leg of the triad, the Russians wouldn’t have to build a preemptive capability. They will already have it. Unilateral disarmament doesn’t work. Ask the Taliban,” said Blank, referencing the U.S. withdrawal and subsequent takeover of Afghanistan by insurgents from that Islamic fundamentalist group.

Meanwhile, the Chinese were also working on building their own triad, another reason the U.S. should retain a robust network of land-based missiles, he added.

Following the Sept. 11, 2001 attacks, occurring the wake of the dissolution of the former Soviet Union, the United States shifted from a defense strategy based on nuclear deterrence to one of counterterrorism, Blank said. Shifting attention away from other nuclear states is allowing them to operate in a “gray area” and challenge U.S. influence, he said.

However, while U.S. lawmakers and diplomats are seeking to break free from Cold War-era principles like “mutually assured destruction,” the Russians are still committed to the paradigm, Blank said.

“We may want to pursue arms control initiatives and break away from the Cold War paradigm, but Russia will not allow it,” Blank said. “The idea that the U.S. and Russia must remain shackled to each other drives Russia’s thinking.“