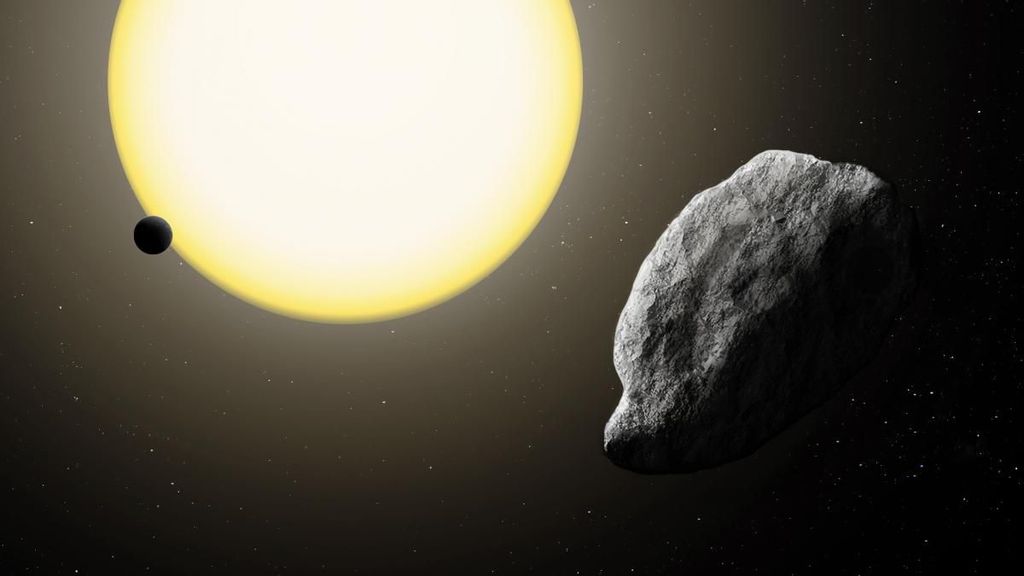 An artist’s conception of the newly discovered asteroid 2021 PH27, which has the shortest known orbital period for an asteroid and second-shortest for any object in our solar system after Mercury. (Katherine Cain/Carnegie Institution for Science)

Astronomers have discovered a previously unknown asteroid that is spiraling on a crash trajectory with the sun or one of the planets of our solar system. But don’t worry — any such collision isn’t expected for millions of years, if at all.

The newly discovered orbiting object is the sun’s nearest asteroid neighbor and has the shortest known orbital period around the Sun: only 113 days. Only the planet Mercury has a shorter orbital period (88 days) in our solar system.

A scientific team led by Scott S. Sheppard of Earth and Planets Laboratory at the Carnegie Institution for Science found the asteroid in pictures captured by the Dark Energy Camera that’s mounted on a 4-meter (13-foot) telescope. In a case of serendipity, Brown University scientists were using the camera — which is based 7,200 feet above sea level at the Terrero Tololo Inter-American Observatory in Chile’s Andean Mountains — for unrelated research on deep space. When Sheppard looked through the high-powered telescope, he used the first few minutes of twilight to capture images of the asteroid now known as 2021 PH27.

Sheppard said the asteroid possibly “dislodged from the main asteroid belt between Jupiter and Mars, and the gravity of the inner planets shaped its orbit into its current configuration.”

“It is possible that 2021 PH27 is an extinct comet from the outer solar system that ventured too close to one of the planets as the path of its voyage brought it into proximity with the inner solar system,” Sheppard said.

More observations will be needed to determine its origins.

Twilight is when the sun is rising or setting: it’s also the best time for seeking asteroids orbiting between Earth and the sun, near Mercury and Venus. Because 2021 PH27 was within the sun’s glare and growing closer, the astronomers had to figure out its orbit before it passed behind the sun. It is now behind the sun, and will not be visible again for several months.

“Because the object was already in the sun’s glare and moving more toward it, it was imperative that we determine the object’s orbit before it was lost behind our central star,” said Dave Tholen of the University of Hawaii.

Tholen had measured the asteroid’s position on the sky and predicted where it would be on the night after its initial discovery.

“I surmised that for an asteroid this size to remain hidden for so long, it must have an orbit that keeps it so near to the sun that it is difficult to detect from Earth’s position,” he said.

“One of the reasons why it is hard to achieve the goal of finding 100 percent of all Near-Earth Objects larger than a kilometer is because some have orbits that help ‘hide’ them from Earth-based observers,” Tholen said.

“Objects like this one — orbiting entirely interior to the Earth’s orbit — are difficult to find and track. There are likely more such objects that have yet to be discovered, and we need a better census of them to estimate what might be the threat of Earth impact,” he said.

The observers determined that the asteroid was not only very close to the sun, but also rather large for an object within the inner solar system. Tholen determined that at 1 kilometer (just over half a mile) in size, and to have remained undetected, it must have an orbit keeping it near the sun and hard to find from Earth. But the exact orbit for 2021 PH27 remained unknown, and a third night of observations on Aug. 13 was needed, with help from the European Space Agency, to finally confirm its path.

The asteroid poses no threat to Earth due to its proximity to the sun. But because it crosses the orbits of Mercury and Venus, its orbit is dynamically unstable. This means that someday, millions of years from now, it may crash into one of the sun’s planets — including the Earth.

Indeed, the relatively remote chances of such a strike are reflected in these statistics from NASA:

“Every day, Earth is bombarded with more than 100 tons of dust and sand-sized particles. About once a year, an automobile-sized asteroid hits Earth’s atmosphere, creates an impressive fireball, and burns up before reaching the surface. Every 2,000 years or so, a meteoroid the size of a football field hits Earth and causes significant damage to the area. Only once every few million years an object large enough to threaten Earth’s civilization comes along. Impact craters on Earth, the moon and other planetary bodies are evidence of these occurrences.”