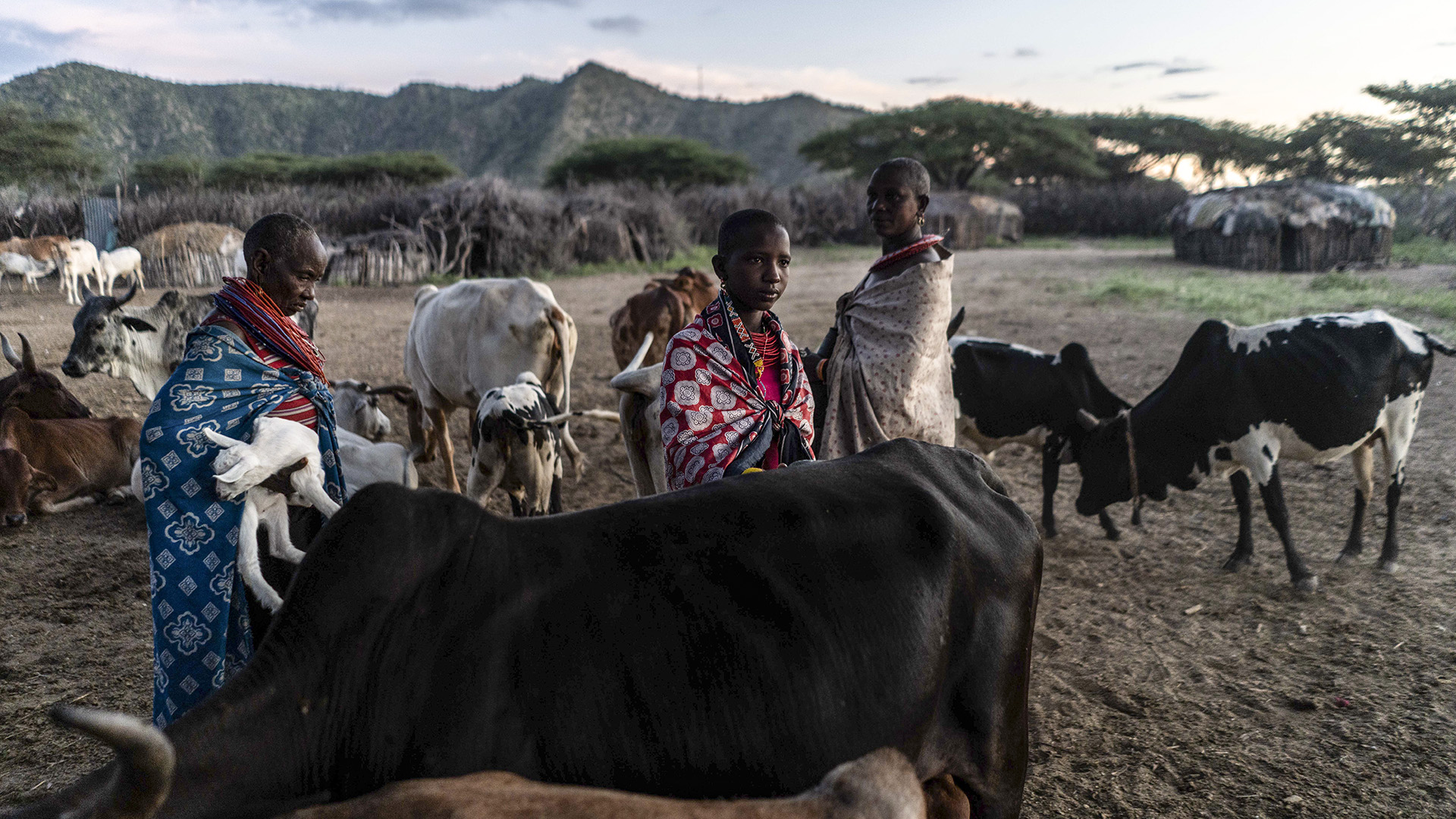 Three Samburu women milk their cows early in the morning on May 23, 2020, in Samburu County, Kenya. Pastoralist communities like the Samburu in northern Kenya fear the locusts will devastate the rangeland on which their livestock are dependent. (Fredrik Lerneryd/Getty Images)

GARISSA, Kenya — More than 7.8 million people across six countries in East Africa are on the edge of starvation as drought intensifies for nearly a year now.

Desperate families across Northern Kenya appealed for water, relief food, and medical services from the government and international aid agencies.

At least 2 million Kenyans are at risk of starvation and are in dire need of emergency relief support, according to the non-profit organization World Vision. The Kenyan government raised the alarm over the drought situation in the ten counties.

Besides Kenya, the other affected countries are Uganda, Ethiopia, Somalia, Sudan, and South Sudan.

Livestock, the primary source of livelihood for many in the affected counties, are under threat. The dry spell is a result of failed rains for a couple of months.

Samuel Odhiambo, the Garissa County meteorological director, said the drought situation in the region is due to depressed rains in October, November, and December 2020.

“The drought situation and current patterns of failed rainfall in the northern region indicate climate change,” he told Zenger News.

Thousands of livestock are deep inside Boni forest, in Kenya’s Lamu County, which has been the lifeline for pastoralists for years.

Artificial ponds, also known as water pans, which collect rainwater during rainy seasons for pastoralists to use during dry spells, have dried up.

“This forest always offered us much-needed support anytime drought came, but this time around, there is no drop of water,” Mohamed Hassan, a herder, told Zenger News.

Although he hasn’t lost any animals yet, he said the situation is dire.

Due to the large number of livestock that depend on the same few water taps, they limit the number of days they take their cows to water points.

“The number of water taps is so limited, and the consumers are many, so we take our cows after every two days,” said Abdi Madhobi, another herder. He, too, is lucky he hasn’t lost any livestock.

Halima Muhumed, a housewife from Lagdera, Garissa County, uses a donkey to fetch water for her family every four days from Faryar to Jilango, 50 kilometers [31 miles] away.

“I use a donkey to carry four 20-liter jerrycans every four days,” she told Zenger News.

“This means each day I’m supposed to use a 20-liter jerrycan before I go back for some more water. Sometimes I come back empty-handed if there are many people at the borehole.”

She says the trip can take a whole day.

She said children and the elderly had been left in the villages as men left with livestock to far-flung areas searching for water and pasture.

Their animals, she said, have crossed over to Somalia, which shares a long porous border with Kenya.

The National Drought Management Authority, the agency responsible for monitoring drought in the country, said in Samburu County alone, at least 100,000 pastoralists are at risk of starvation.

The country suffered a desert locust invasion in 2019, which worsened the situation as the swarms of insects ate up much-needed animal pasture.

He said 71 percent of water pans and dams across Garissa County have dried up, triggering livestock migration from one county to another.

“About 24 percent of boreholes across the county are not operational due to pump breakdowns and siltation,” Dubow said during the release of an assessment report of the drought situation in the county in July 2021.

“As many as 161 sites are receiving water from trucks. All households in 25 villages in Maalimin, Benane, Goreale, Baraki, and Madogashe in Lagdera sub-county are supplied with water from trucks. Water pans which used to be their only source of water, dried up. The cost of water by vendors has increased from the usual Sh20 [$0.18] to Sh30 [$0.28) per 20-liter jerry can.”

Scores have been killed in Garissa, Isiolo, Wajir, and Marsabit borders as pastoralists scramble for the little remaining resources.

“We appeal for help from the government and anyone because we need food and water,” Mohamed Abdi, a local religious leader from Garissa County, told Zenger News.

“The situation is dire that needs immediate action. The situation is getting out of hand, and we plead with the government and international aid agencies to intervene speedily.”

No international aid agency has responded so far.

Abdi said locals buy water from a water tanker that charges about Sh20,000 [$183], which many cannot afford.

“There is a lot of livestock migration from one county to another,” Amey told Zenger News.

“Everyone is looking for little available resources. We are looking into ways to ensure pastoralists coexist peacefully and share the little resources in peace.”

He said they had held peace meetings to encourage communities to coexist and share the little available resources.

The Chief Administration Secretary at the State Department for the Development of Arid and Semi-Arid Lands, Abdul Bahari Ali, described the situation as “pathetic.”

“Majority of our population depend on livestock, yet the market for animals has drastically dropped,” he told Zenger News.

“It’s a pathetic situation for many families. We will launch bursaries for affected families to ensure that children do not miss school. We will ensure a hundred percent transition to high school for primary school children in these regions afflicted by drought and famine.”

Bahari said the government would use local chiefs to identify the most vulnerable and hardest-hit drought victims and pay school fees for their children.

Garissa County Executive Committee member for Water Abdi Omar said that the county had set aside Sh100 million [$912 408] to disburse to pastoralists to pay school fees.