Hoping For Regeneration In Israel’s Burned Out Forest

The largest wildfire in the country’s history destroyed 6,200 acres of woodlands over three days in August. 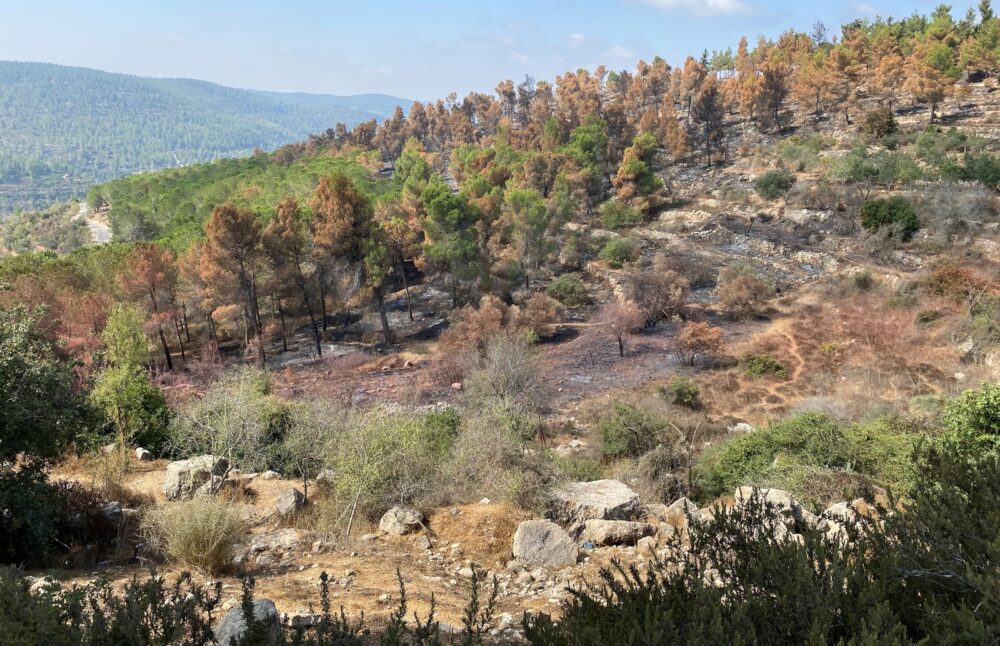 Nurit Hibsher says in the 10 years she has been a forester, she doesn’t remember fires like the ones that destroyed 6,200 acres of woodlands in the Judean Hills this month.

“It’s something really unusual,” said Hibsher, the head of forestry for the central region at the Keren Kayameth LeIsrael-Jewish National Fund (KKL-JNF).

Hibsher was standing in Sataf Forest, west of Jerusalem less than a week after the largest wildfire in Israel’s history. It took some 1,500 firefighters working for 52 hours to finally put out the blazes, which are reported to have been set deliberately in three locations.

But today the scene is vastly different. Smoke lingers in the air, waiting to be washed away by winter rains that are still some way off. Half-green, half-brown trees and shrubs stand in silent testimony to the unpredictable path of the wind-whipped flames and the bravery of those who battled them.

“I was not here during the fires; I wanted to let the firefighters do their job,” says Hibsher, whose job is to control the growth, composition, health and quality of KKL-JNF forests in the central region, including Sataf.

“Now, a few days later, to look at the damage is really hard. I know how much effort we invested here in Sataf for the past 40 years, and in other areas much longer.”

These days, sights like this are becoming more common around the world. Huge forest fires in California, Turkey, Australia, Morocco, Canada, Greece and even Siberia have dominated the news as hotter, drier temperatures turn living trees into kindling.

In Israel the increasing number of fires every year, and their growing ferocity, have raised questions about the country’s long history of tree planting.

When KKL-JNF began reforesting Israel in 1901, pines were chosen for their rapid growth. But they proved highly flammable, and now the organization favors broadleaved trees and conifers such as cypress.

Hibsher, who was Israel’s first female forester, says the blaze in Sataf blew in from an old natural (not planted) Aleppo pine stand around Beit Meir, a village some eight miles to the west.

“It traveled along the wadi very fast, like a firestorm, and then climbed the mountains. When fire runs that fast you cannot manage it. You have to wait until it gets to a hilly area where it slows and then you can stop it,” Hibsher said.

Hibsher kneeled to inspect an Atlantic pistachio, striped into thirds by the blaze: green leaves, brown leaves and bare branches.

“This will regenerate from the base of the trunk. In a month or two we’ll see new shoots, even before the rains,” she said.

Aleppo pines also regenerate, said Hibsher. “They burn very easily. Their pine cones, however, open up in the extreme heat of the fire and spread seeds. So this will be the next generation.”

In previous decades when fires were few and far between, forests had time to regrow before the next blaze. The old Aleppo pine stand that burned in this fire was regenerated from a powerful fire in the Jerusalem hills in 1995.

“The problem is, with climate change the period between fires is getting shorter,” said Hibsher, and this is her greatest concern.

Even if this particular fire was caused by arson, forest fires are getting dramatically more frequent and intense across the globe.

It doesn’t take more than a carelessly discarded cigarette or glowing charcoal to start a conflagration. And Israel also suffers fire terrorism, particularly the Gaza border communities under frequent attack by incendiary balloons and kites.

“If we have another fire here in two or three years, we are afraid that the natural process of germination and regeneration will lose out to invasive species that are not a natural part of this ecosystem,” Hibsher said.

She pointed to a partially scorched acacia shrub as an example.

“During the British Mandate period, the British planted acacias along the coast to stabilize the dunes. We also planted it during the ‘60s and ’70s along the coast. And then we learned it was invasive,” said Hibsher. “It regenerates quickly after a fire and grows everywhere. We will have to put a lot of effort into chemical treatments to keep the acacia from spreading.”

In general, KKL-JNF and the Israel Nature & Parks Authority leave burned forests to recover naturally for a few years. Replanting, if necessary, will be done according to a master plan only after that time.

Meanwhile, even the ashes blanketing the forest floor can be beneficial in the process of mineralization and regeneration over the next five years, Hibsher said. “But it will take 20 to 30 years to see tall trees here again.”

Proactive safety measures will be taken in areas where hikers are expected to come.

“We will cut the burned trees after the winter. If we cut them now, we will lose a lot of seedbanks in the ash and the area will have soil erosion. After a fire, the soil is very hydrophobic [tending to repel water],” Hibsher said.

The August blaze caused the evacuation of 10 villages in the Jerusalem hills, including a retirement community and a psychiatric hospital, which was evacuated under extreme fire conditions.

Nobody was injured, thanks in part to fast actions by residents and in part to firebreaks created around the villages as a “safety belt” providing access for firefighting vehicles.

Nevertheless, some properties and businesses were ruined, like Micah and Shoshanna Harrari’s handmade wooden harp workshop in Ramat Raziel, five miles west of Sataf. Near that same village, an estimated 10,000 laying hens were killed when their coop caught fire.

Smaller animals had little chance of escape. An unknown number of rodents, lizards, snakes, turtles, fledgling birds and insects perished in Sataf and nearby woods including Mount Tayasim  and Mount Eitan.

“It’s very sad,” said Hibsher. “But we think some of the animals, like snakes, were able to hide in holes underground and will come up when they feel it is safe.”

As for the insects that are essential to the ecosystem, “After the first winter you will see the herbaceous vegetation growing and it will bring butterflies and aphids,” she said.

“Once the insects return, we will see the lizards return too. We lost many, but there are still plenty out there.”&ZeroWidthSpace;

Hoping For Regeneration In Israel’s Burned Out Forest appeared first on Israel21C.