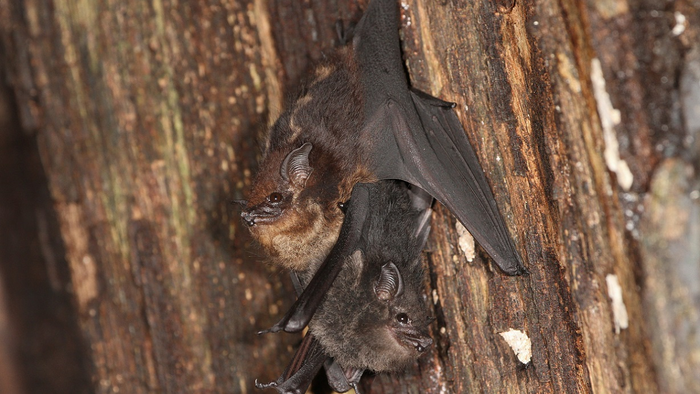 Saccopteryx bilineata bats in their natural environment. Researchers have found that the bats' pups begin learning their species' characteristic elaborate songs and calls at an early age with “babble.”  (Michael Sifter, Courtesy of Museum Naturkunde Leibnitz)

Bat pups and human babies appear to be alike in using “baby talk” with adults in a process of learning how to vocalize.

Ahana Fernandez writes in the journal Science that Saccopteryx bilineata pups begin learning their species’ characteristic elaborate songs and calls at an early age with “babble.”

A former visiting scientist at the Smithsonian Tropical Research Institute (STRI) in Panama, Fernandez watched bats in their natural environment in Panama and Costa Rica to find that mothers of the species used “motherese” to address their offspring.

Parallels between baby S. bilineata bats and humans offer insights for understanding the evolution of human language. Language defines human nature, while speech as the vocalization of language requires learning to control tongue, lips and jaw. Control comes as human infants babble with their mothers, irrespective of culture and the language to be learned.

“During my first field season when I spent many hours sitting quietly in front of the animals observing them, I realized that mothers and pups interacted during the babbling practice of pups,” said Fernandez, a postdoctoral fellow at the Museum of Natural History in Berlin. “Especially, mothers were producing a particular call type during pup babbling.”

Her study shows that bat babble resembles baby talk among human infants. Both species use repetition of syllables and bouts of babbling with a regular beat (rhythmicity). In Fernandez’s paper, baby bats resemble baby humans by spending much of the day nursing or resting while attached to their mothers, and babbling. She first described bat babble in a 2020 study.

“While babbling, pups learn a part of the adult vocal repertoire through vocal imitation of adult tutors,” Fernandez said. “This makes pup babbling a very interesting behavior because it tells us when learning is taking place and offers great opportunities to study if and how different factors, for example the social environment, influence learning success.”

S. bilineata is the only mammal now known to babble and use vocal imitation. Babbling is rare and has been described previously in songbirds only.

Bat pup baby sounds are rhythmic and found in both males and females. In songbirds, only the young males babble.

By habituating day-roosting bats to human observers, Fernandez and other scientists observe their natural behavior for months and years in an undisturbed environment. Given that most labs work with captive animals or track wild animals automatically, this is an unusual approach.

“Our findings on shared babbling characteristics in bat pups and human infants would not have been possible without a deep understanding of our bats’ natural and social history for which long-term data is essential,” said Mirjam Knörnschild, head of the Behavioral Ecology and Bioacoustics Lab at the Museum of Natural History in Berlin, Germany, and a research associate of the STRI in Panama.

“It is fascinating to see these compelling parallels between the vocal practice behavior of two vocal learning mammals,” said Knörnschild. “Our study is contributing to the interdisciplinary field of biolinguistics, which focuses on the biological foundations of human language to study its evolution.”

After birth, S. bilineata pups engage for about seven weeks in daily babbling. It is characterized by multisyllabic vocal sequences which include parts of adult repertoire.

“Pup babbling is a very conspicuous vocal behavior; it is audible at a considerable distance from the roost, and babbling bouts have a duration of up to 43 minutes,” said Martina Nagy of the Berlin lab, “and while babbling, pups learn the song of the adult males.”

Work on a vocal-learning, babbling bat species may ultimately provide another piece of the puzzle to better understand the evolutionary origin of human language.