What A Spectacle! Over 1.2 Million Wildebeests Begin Annual Kenya-Tanzania Migration 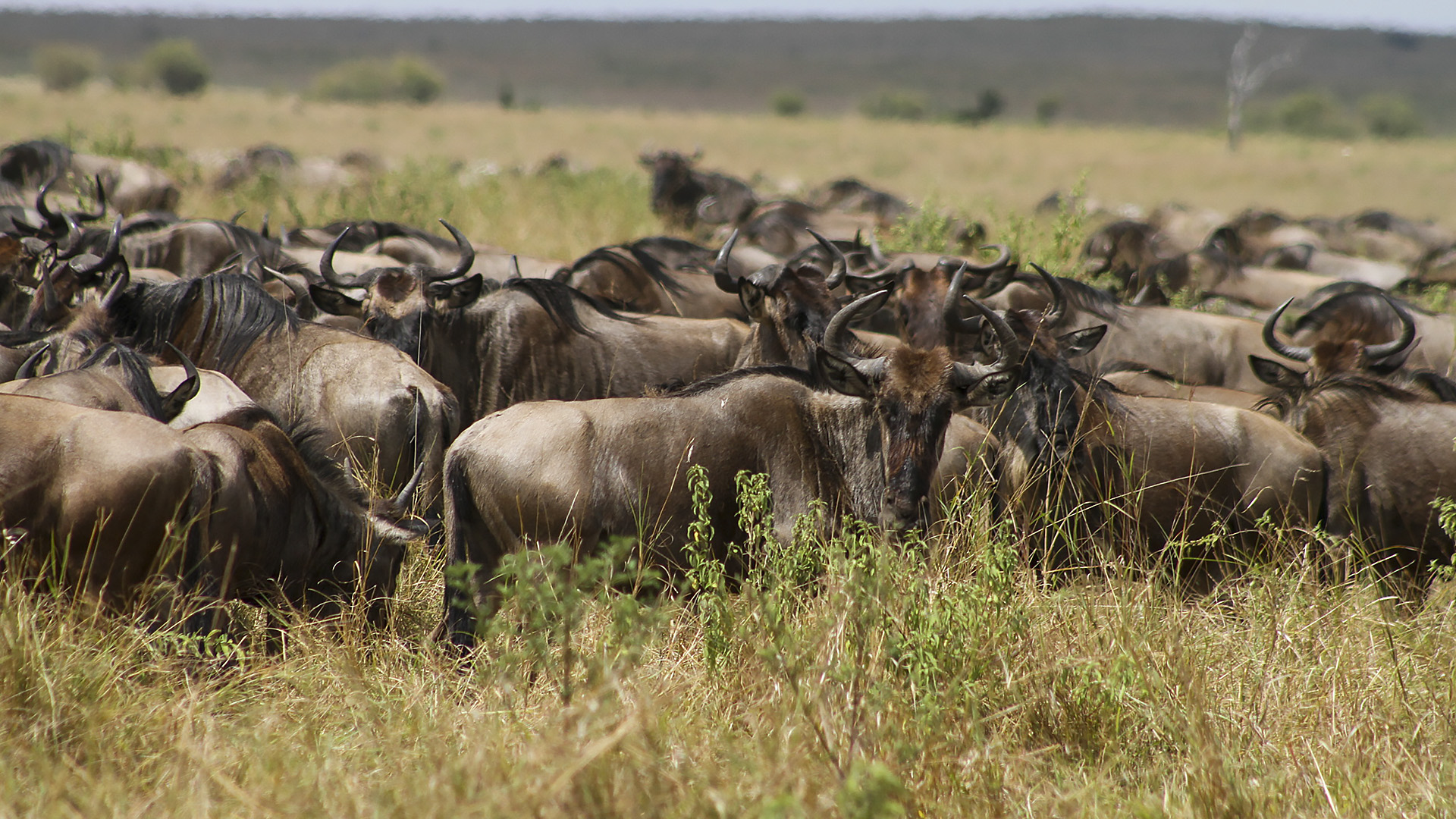 Over 1.2 million animals, mostly wildebeests, and zebras cross the crocodile-infested Mara River from the Maasai Mara National Reserve in Kenya to the Serengeti National Park in Tanzania for pastures. (Keit Silale)

Sayaru sells beads to tourists at the Maasai Mara National Reserve in Narok County, and usually, the months of July, August, and September are good for business.

During these months, over 1.2 million animals, mostly wildebeests, and zebras cross the crocodile-infested Mara River from the Maasai Mara National Reserve in Kenya to the Serengeti National Park in Tanzania for pastures.

Termed the Great Migration, it is the largest herd movement of animals on the planet, driven by nothing but natural survival instincts.

The event usually draws millions of tourists to the two East African nations.

However, the annual spectacle at the Maasai Mara National Reserve went unnoticed in 2020 as global travel restrictions to curb the coronavirus prevented tourists from visiting.

“We suffered a great deal due to the pandemic,” Sayaru told Zenger News.

“We had no jobs, no businesses. We had no money to buy food. We turned to bush meat for food to make some money on the side, even though this is illegal.”

However, things are looking up again for Sayaru and many other women who depend on tourism, as the number of tourists visiting the reserve to witness one of the Seven Wonders of the Natural World rise.

“I am happy I can feed my family once again. Tourists are flocking to the park, and my beads business is booming. We have prayed hard for fortune to turn in our favor.”

Local and international tourists have fully booked hotels in the Maasai Mara National Reserve, forcing hundreds of visitors to camp in tents to catch a glimpse of the spectacular migration.

“The number of tourists visiting Kenya dropped by two-thirds due to the global pandemic, affecting our revenue negatively,” Cabinet Secretary for Tourism and Wildlife Najib Balala told the press at Mahali Mzuri luxury camp on Aug. 6 during a visit to the Maasai Mara National Reserve.

Travel and tourism contributed $4.2 billion to Kenya’s Gross Domestic Product in 2020, nearly a 50 percent declined compared to 2019, which stood at $8.1 billion.

“Tourism contributes an average of 10 percent revenue every year to the Kenyan economy, but last year due to the lockdown imposed by the government, it contributed a lot less. Many tourism activities shut down, and even the wildebeest migration went unnoticed. But the situation is looking up again, boosted by the migration spectacle,” Balala said.

John Dostalek from France was among hundreds of tourists in the Maasai Mara who enjoyed the sights of the wildebeests’ frantic efforts to cross the Mara River while dodging crocodiles and lions laying in wait in the expansive savannah.

“Watching the wildebeest migration is an awe-inspiring event that reminds you how beautiful Africa is,” he told Zenger News.

“I have always heard about how spectacular it is, so I needed to witness myself. I have been here for a week and hope to stay for another week to enjoy the Maasai Mara National Reserve fully.”

As a nature and wildlife enthusiast, Dostalek says visiting the Maasai Mara National Reserve to experience the large herds of wildebeest migration has always been on his traveling bucket list.

He canceled his trip to Maasai Mara in 2020 due to the global Covid-19 pandemic but did not lose hope of visiting the reserve.

But even as the annual wildebeest migration continues, experts note the percentage of wildebeest and other wildlife migrating has dropped to 80 percent over the past few years.

Paula Kahumbu, a wildlife conservationist and the chief executive of WildlifeDirect, said human activities and infrastructure development in Africa hinder wildlife migration, contributing to their decline.

“We need to protect our wildlife and support migration,” she told Zenger News.

Scientists believe migration is deeply rooted in the wildebeest DNA, which tells them precisely when to move across borders to look for nutritious green pasture and give birth.

Zebras, believed to possess good eyesight and sharp memories that help them take the safest migration routes, accompany and direct wildebeests to their pastures on either side of the border.

Researchers say wildebeests have an excellent sense of smell which helps them detect their preferred pastures and water while miles always, making their relationship with zebra’s mutually beneficial against predators.

Maasai Mara National Reserve senior warden Joseph Sindiyo said wildlife contribution to the economy is significant, and government should protect them from declining.

“The only reason tourists are flocking Maasai Mara is to because of wildlife migration,” he told Zenger News.

“We need to protect our game parks for our wildlife and posterity.”

To this end, since 2004, the government has evicted thousands of encroachers of the Mau Forest, Kenya’s largest water tower whose continued destruction threatens the Mara River, the primary source of water for animals in the Maasai Mara plains.