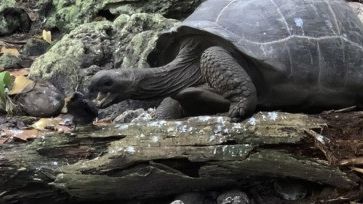 Scientists now have video evidence of a giant tortoise hunting and finally eating a baby bird. While there have been earlier reports of the behavior, this is the first time it has been fully documented via video. (Anna Zora)

For the first time, a giant tortoise has been observed hunting and eating another animal in its natural environment.

While most people think of the lumbering reptiles as slow-moving herbivores, scientists now have video evidence of it hunting and devouring a baby bird. While there were earlier reports of such behavior, this is the first documented proof.

“On the islands where they still exist, they are the most significant herbivores; effectively, the island’s equivalent of elephants,” said study co-author Justin Gerlach of Cambridge University.

The study, published in the journal Science, states that giant tortoises consume as much as 11 percent of primary plant production and serve as eco-engineers by squashing vegetation, eroding rocks and digging mud wallows.

“There are very few places in the world where they still play these roles,” Gerlach said.

Frégate Island of the Seychelles island chain is privately owned and managed as a wildlife refuge and ecotourism resort. Long a plantation, the island is being restored and now has about 3,000 the Seychelles or Aldabra giant tortoises (Aldabrachelys gigantea) variety. While much of the native plantation was nearly extinct, there are now forests of takamaka, cashew, Indian almond, Indian mulberry trees and the rare Wrights Gardenia.

Restoration saved the Seychelles magpie robin from extinction. Seabirds have recolonized the island: Some 265,000 noddy terns (Anous tenuirostris) in 10,000 nests covering an area of 1.9 hectares now make their home there.

The “exceptional combination of a tree-nesting tern colony with a resident giant tortoise population has created conditions leading to systematic hunting of birds by several individual tortoises: an entirely novel behavioral strategy for any tortoise species,” the study states.

While there are reports of Galápagos giant tortoises squashing birds under their huge carapace, and Aldabra tortoises crushing crabs, they may not have been deliberate acts.

“Our observation is the first documentation of deliberate hunting in any tortoise species,” the study says.

Lead author Anna Zora observed several tortoises in the tern colony on the afternoon of July 30, 2020. It was there she saw an adult female approaching a tern chick resting on a log. Walking at its normal pace toward the chick, the tortoise reached out with its open mouth once the bird was near. When the chick fled along the log, the tortoise pursued as it continued to bite.

Fluttering its wings and trying to peck at the tortoise, the chick paused. It was then the tortoise closed its jaws around the chick’s head. The reptile dropped the dead chick and climbed off the log to retrieve and swallow it whole.

It took about seven minutes for the tortoise to pursue the chick. The killing took 92 seconds.

The study’s authors said the tortoise approached its prey with wide-open jaws, and tongue retracted. This is aggressive behavior that contrasts with feeding behavior of tortoises while feeding on land. The approach to the chick on the log suggests to the authors the tortoise had learned that chicks usually remain on the log and above ground level. This is typical of tern chicks fallen from their nests in trees.

“This indicates that this type of interaction is not infrequent for this individual. The observation of other tortoises hunting and consuming birds suggests this behavior has been adopted by several individuals,” the study says.