The naturally curious seals, especially pups, are injured or killed when they get tangled in discarded fishing lines, study finds. 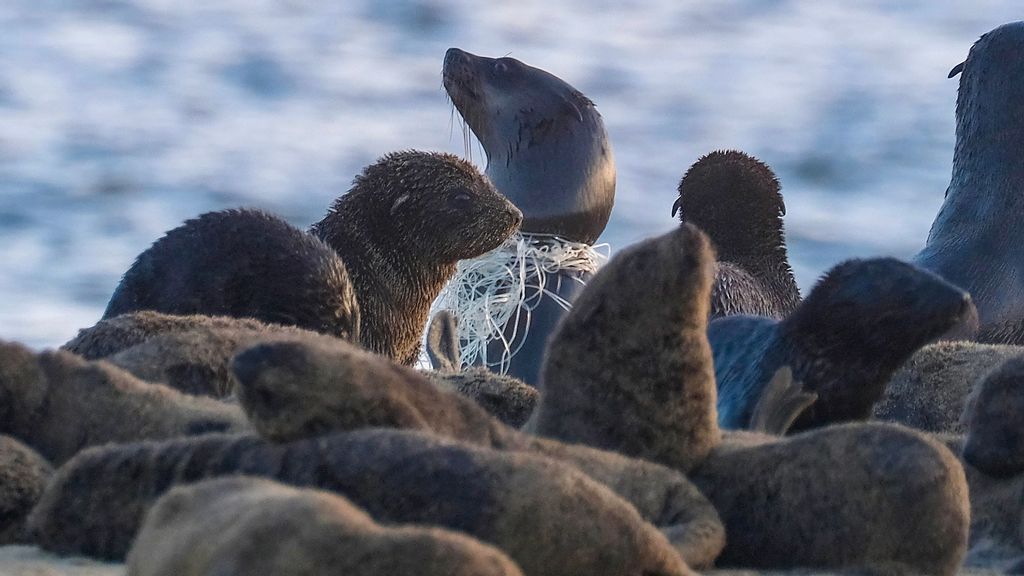 Fishing net is tangled around the neck of A Cape Fur seal. Discarded nets are a major threat to the seal populaton. (Sea Search Namibian Dolphin Project Naude Dreyer/Zenger)

The pups’ smaller necks and curious nature make them more vulnerable to entanglement and suffocation.

Discarded fishing equipment slices deep into a seal’s neck, video shows. Researchers are seen cutting away the debris to save the seals. The gashes left by the material shows just how tightly it was wrapped around the seals’ bodies.

Researchers from Stellenbosch University, Sea Search-Namibian Dolphin Project and Ocean Conservation Namibia studied two seal colonies in Namibia — Walvis Bay and Cape Cross — and found that 1 in every 500 seals was entangled in gear, according to a statement.

Of the 347 entangled animals documented, the team, led by Naude Dreyer of Ocean Conservation Namibia, disentangled 191 animals between 2018 and March 2020.

“Plastic pollution and particularly lost and discarded fishing nets are having a big impact on marine life,” said Tess Gridley, co-director of the Namibia Dolphin Project and senior lecturer at Stellenbosch University. “Once entangled, these seals face a painful and uncertain future: finding food becomes harder and wounds can become deep and debilitating, and likely cause death in many cases.”

Gridley proposes three solutions: Financial incentives that would encourage the recovery of lines, safe disposal of nets and the use of sustainable alternatives to plastics.

The findings, titled “Entanglement of Cape fur seals (Arctocephalus pusillus) at colonies in central Namibia,” were published in the journal Marine Pollution Bulletin.

“Seals should not have to suffer this way because of our carelessness with waste,” said Stephanie Curtis, a research student with the Namibian Dolphin Project and lead author on the paper.

“They are very curious and playful animals and will investigate objects in the water, but their thick, backwards-facing fur which keeps them warm at sea easily snags lines and straps and stops it falling back off,” said Simon Elwen, co-director of the Namibian Dolphin Project.

The project is collecting donations to fund its conservation and research efforts.

An estimated 705,000 tons of deadly plastic gear enter the world’s oceans every year, according to EcoWatch, citing a Greenpeace report. A single ghost fishing net killed around 300 sea turtles in Mexican waters in 2018.