Scientists have found a nontoxic, sustainable material for glow-in-the-dark applications. 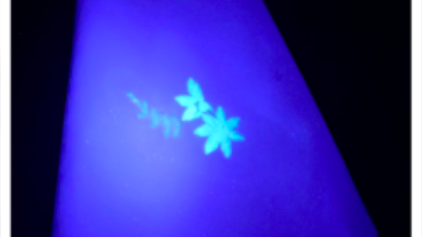 Forest visitors have long known that some trees glow, but scientists only recently harnessed this capability as a sustainable, nontoxic alternative to traditional phosphorescent materials.

Scientists believe they can harness wood’s natural ability to glow to develop a phosphorescent material that can be used in a variety of applications, including ‘glow in the dark’ paint and dyes, as well as medical imaging and optical sensing.

In their paper, published in Cell Reports: Physical Science, an international team investigated the natural phosphorescent properties of lignin, a major component of wood.

“It is indeed an unexpected and interesting discovery,” said lead author Zhijun Chen of the Northeast Forestry University in Harbin, China.

“We think this work will not only provide a new option for sustainable afterglow materials, but is also a new route for the value-added utilization of lignin, which is the main naturally occurring aromatic polymer, and the pulping industry produces 600 trillion tons per year,” he said.

“Most current phosphorescent materials are either toxic or difficult to prepare, so we wanted to develop a new material that overcame these limitations,” said co-author Tony James of the University of Bath in England.

To show what the new material can do, the researchers dyed thread that can be used in luminescent textiles. This technology could be used to prevent the counterfeiting of currency, luxury clothing and handbags.

Room-temperature phosphorescence (RTP) is when a material absorbs short-wavelength energy such as UV light and then emits it as visible light. Fluorescent materials, however, immediately emit the light and stop glowing once the light is switched off.

Basswood, the researchers found, naturally phosphoresces, though weakly. It releases light for a few milliseconds because of the lignin trapped in the wood’s cellulose matrix.

“All lignin glows weakly, but most of the light energy is lost by vibration or movement of the lignin molecules, meaning it isn’t clearly visible to the naked eye,” James said. “We’ve found that immobilizing the lignin in an acrylic polymer means more energy is emitted as light — in other words, the less it rattles about, the more it glows.”

Mimicking lignin’s phosphorescent properties, the authors cross-linked lignin within a 3D polymer network, causing it to glow for about one second. They found they could change the glow’s duration by adjusting the network’s cavity sizes and varying how long the polymer was dried.

“Although there is room for improvement, our new material shows great potential for making a more stable, sustainable, biodegradable non-toxic phosphorescent material that could be used in a range of applications,” James said.

«Previous Post
Lovely Grub: How A Humble Fly’s Offspring Could Save The Planet»Next Post
Core! How Volcanoes Act To Keep Earth’s Surface Cool