Smartphone app tracks how many steps you take and converts that data into virtual tokens exchangeable for real world goodies. 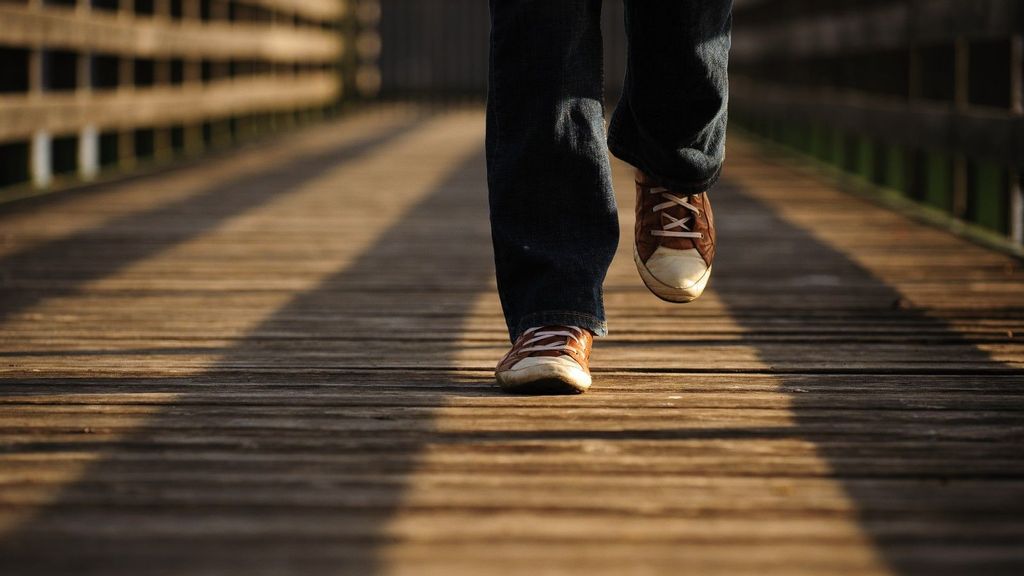 By now, most people know that getting in 10,000 steps a day is healthy, but motivation is not always easy to come by. (Frank Busch/Unsplash)

Some 61 percent of Americans report that they gained weight during the COVID-19 lockdowns, says Alon Silberberg, CEO of UVTAL Health. The Israeli startup’s first product, Rumble, aims to address the excess poundage through software and incentives.

The Rumble app tracks how many steps you take and converts that data into virtual tokens exchangeable for real world goodies — a smoothie at Israeli fruit and juice chain ReBar, a magazine at a Steimatzky bookstore, a pair of new shoes, or a session with a personal trainer.

Nearly a million Israelis have downloaded Rumble, and the 25-person company plans to launch in North America by the end of 2021 and three additional markets in 2022.

The first and largest group of Rumble users is the general population. The second, about a third of Rumble’s total user base, is corporate wellness programs for employees. Rumble is working with about 70 Israeli corporations and organizations, including Intel, Mobileye, the Israel Electric Corp. and the Israeli Workers Union (the latter has some 800,000 members).

The third vertical is insurance companies, including HMOs, that can tweak policies or change premiums based on a customer’s demonstrated physical activity. UVTAL has partnerships with Bituach Leumi (Israel’s social security administration), Sheba Medical Center and Clalit, the country’s largest HMO.

Silberberg hopes that its first US customer will also be in the health-care space.

Rumble is the product name, but UVTAL’s mission is broader, with a focus on all manner of “motivational digital platforms to help users to encourage positive behavior,” Silberberg said. “We are very deep into the wellness and wellbeing industries.”

The name of UVTAL’s program with Clalit and Sheba is “Atid Bari” — a Healthy Future. Bituach Leumi is using Rumble with some 2,000 pre-diabetic members.

For municipalities, Rumble helps bring customers back to local shopping post-pandemic, rather than online. A city can create its own “health coins” to be redeemed at local businesses.

“We are all of us nowadays expecting a more proactive approach from our HMOs,” Silberberg said. “In the old world, your insurance company was a passive thing in your life, charging you a monthly premium while hoping nothing would happen. Now, the goal is helping us avoid the health issues we’ll see as long as our Western lifestyle continues.”

That lifestyle often includes commuting to work and sitting in front of a computer. (Or in the COVID age, walking into another room and Zooming — even less physical activity).

By now, most people know that getting your 10,000 steps a day is healthy, but motivation is not always easy to come by. Rumble asks: What if you were rewarded for your steps or your insurance company lowered your premium because it can see you work out five times a week?

It’s a big deal for the insurance company too, for which 75 percent of expenses is paying out claims. “If we can reduce those claims, this becomes very profitable for them,” Silberberg said.

An app that makes exercise rewarding is also good for customer retention: If Clalit [health services] has the app but another HMO doesn’t, you might think twice about switching plans.

Rumble is not just about health-centered “bribes,” though. There’s also a social incentive.

“Families, schools and work colleagues can create their own teams and compete against each other,” Silberberg said. “You can see what your daily health is compared to others. That’s a strong incentive for a lot of us.”

“The app is a learning system,” Silberberg said. “So, you’ll receive a different set of messages than I will, based on the number of times you open the app, the hours you’re using it, the number of hours you’re engaged in a group activity or buying certain products.”

Someone into working out solo might get a message reading, “Hey, if you walk another 1,000 steps today, you’ll meet your weekly goal,” while someone with a more competitive streak might receive a message saying, “You did 21,000 steps, if you do 200 more, you’ll be first place in your group.” And someone more into the prizes might be prompted, “Another 20 steps and you’ll get that $25 gift card.”

Rumble uses both artificial intelligence and machine learning to work its personalization magic.

Rumble works with Apple and Android smartphones as well as wearable devices from Garmin, FitBit, Xiaomi and Apple.

Getting paid to exercise

Users either buy items through the Rumble app or receive a discount code to present at local shops. Businesses that use Rumble slot it into their advertising budget and pay a commission to UVTAL.

In that respect, Rumble competes with marketing dollars that also go to Instagram, Facebook and TikTok, although Silberberg insists Rumble “shows a better ROI for most of our clients.”

Corporate clients such as HMOs and municipalities pay a one-time set-up fee, then either a fixed monthly retainer or an amount based on the number of subscribers.

Silberberg created Rumble when he left the IDF after a long career. “In the army, just to have breakfast, you need to walk two kilometers from your room to the dining room with your heavy weapon and everything. Then you go off to a long exercise,” he said.

“After I was released, I met the typical Israeli day where you get in your car at 6:30 a.m., sit in traffic for 1.5 hours and then in an office for eight to nine hours before heading back home with another hour and a half of traffic. Then you just drop dead on your couch.”

Silberberg’s approach was personal at first. “If I do 10,000 steps seven days in a row, I’ll buy myself a smoothie,” he would tell himself. “Then I wanted to challenge myself to go even higher, so I promised that I’d buy a new pair of running shoes if I hit 15,000 steps.”

Silberberg thought he was on to something, so he sent out a survey to 700 people in Facebook Groups. He asked them: What would be your biggest incentive? “If your doctor says you’ll die from not working out? Or if you get paid to exercise?”

UVTAL was founded in 2017 and is based in the Tel Aviv suburb of Rishon LeZion. The mostly bootstrapped company had a small pre-seed round and is getting “very close to turning a profit” after hitting the Israeli market in 2018.

Part of a team

COVID-19 led to an awareness of the fragility of health, Silberberg said.

“People who got COVID and were healthy before seem to have managed better than those who were less healthy. The pandemic also raised awareness of the importance of feeling part of something bigger than yourself when you’re working from home. By competing against your colleagues, you’re still part of a team, no matter where you are.”

The insurance sector also got a wake-up call “as they realized they need to be ready for the next time they have to monitor patients remotely. We’re part of the whole telemedicine revolution.”

The company is named after two good friends of Silberberg’s — Yuval Dagan and Tal Yifrach — killed during Operation Protective Edge in Gaza in 2014. “They were the best guys I had the honor to know,” Silberberg said. “I believe that both would have lived to be something greater than themselves. We wanted to create a company doing good in their names.”

Get Real-world Rewards For Walking With Fitness App Rumble first appeared on Israel21C.

«Previous Post
India Working On A Standalone Pan-Corona Vaccine»Next Post
Lovely Grub: How A Humble Fly’s Offspring Could Save The Planet