Lovely Grub: How A Humble Fly’s Offspring Could Save The Planet 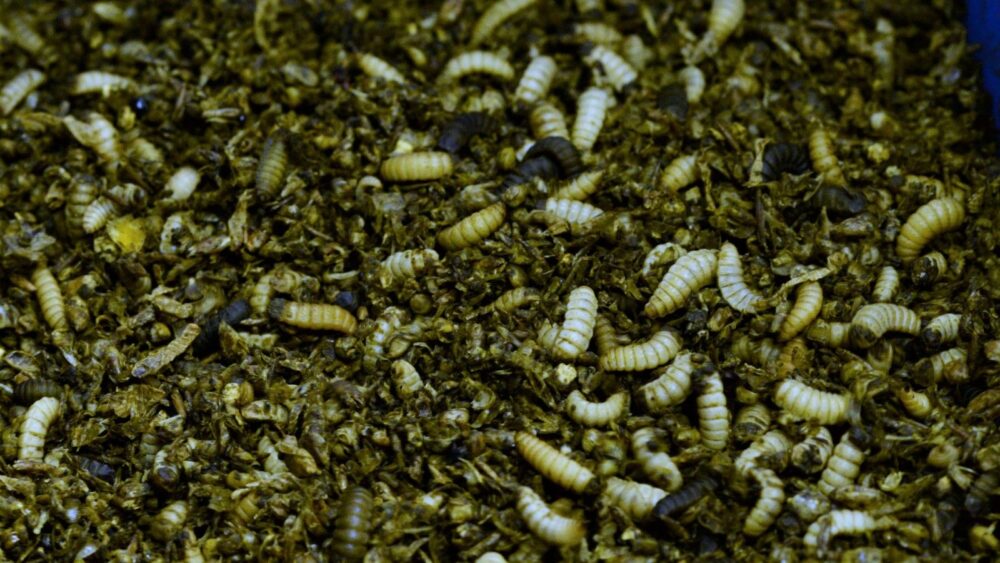 Could these black soldier fly larvae help save the planet? (Courtesy of Entoprotech)

An Israeli startup has drafted an environmental warrior, the South American black soldier fly, to help cut back on greenhouse gases while producing high-protein animal feed.

Black soldier flies (hermetia illucens), like most insects, have a distinct lifecycle: A female fly lays her eggs (some 500 at a time), which turn into larvae. After eating voraciously — the flies increase their body weight 7,000 times in a matter of weeks — the larvae turn into pupa and then into a mature adult fly.

The fly is the least interesting part of the process, at least for Entoprotech.

“Black soldier flies mostly sit on the wall,” CEO Sasha Babitsky said, because unlike the hungry larvae, the adult flies “have no digestive system. The fly will mate, a female will lay her eggs and then, after seven days, the fly dies.”

But the larvae are chock-full of protein — up to 50 percent of their dry weight — and can be turned into a variety of products.

The main one is insect protein meal that can replace fish meal, which is widely used as a source of feed for pigs, poultry and aquaculture.

Since the mid-1990s, due in part to overfishing, annual production of fish meal has dropped from a height of 8.5 million tons to 4.5 million tons a year today. At the same time, aquaculture has become the fastest growing part of the agriculture industry.

Fish meal production is also a very destructive process for marine life in the ocean. So, an alternative source of feed protein from black soldier fly larvae makes sense from both an economic and environmental perspective.

The process also addresses the problem of organic waste.

In the European Union, Babitsky said, “there is a complete ban on burying food waste in landfills” since it generates large amounts of methane, a component of greenhouse gases that is 28 times more potent than carbon dioxide (CO2). Food manufacturers and recyclers around the world are seeking environmentally friendly and less costly alternatives.

Entoprotech plans to build waste-processing facilities with local partners around the world. The black soldier fly larvae in these facilities will eat up the organic waste while creating a commercial product that Entoprotech can turn around and sell — with no methane or CO2 byproducts.

“We throw away something like 35 percent of the food we produce. It’s a huge amount of resources invested that then ends up in a landfill,” Babitsky said.

In addition to larvae-derived fish and animal feed, Entoprotech is developing protein products based on black soldier fly bioactives for the pharmaceutical and cosmetics industries.

That’s because the larvae produce antibacterial peptides that can replace current antibiotics in human and veterinary applications.

Entoprotech is working closely with research groups at hospitals and at the Hebrew University of Jerusalem to further explore and develop the anti-inflammatory and antibacterial features of black soldier fly larvae.

(As a side note, the lack of bacteria means that, despite an Entoprotech facility being filled to the brim with organic waste, there’s no rotten food smell.)

The final product coming out of Entoprotech’s process is poop. The larvae eat and eat and then they excrete. Entoprotech converts the poop into 100 percent organic fertilizer. “Nothing is thrown away. It’s full circular consumption,” Babitsky said.

Another environmental benefit: No water is used in the process.

Started by a turkey farmer

Entoprotech is different from other protein-from-insects startups in Israel, such as Flying SpArk and Hargol FoodTech, which make protein powders for human consumption.

Entoprotech was started by Naum Babaev, “who’s also the biggest turkey farmer in Russia with some 600 farms,” Babitsky said.

Babaev is the founder of the Russian dairy company Rusmolco and joint owner of the Damate group, a large agricultural holding company.

Babitsky, who also hails from the former Soviet Union, was consulting for Babaev when the two decided to set up a company. Babaev asked Babitsky to take the helm.

Babaev decided to keep the pilot waste facilities in Russia, but all R&D was moved to Israel, Babitsky said from his office in Caesarea.

Entoprotech employs seven people in Israel and 40 in Russia. The Russian operation is now a subsidiary of the Israeli HQ.

Entoprotech has been financed to date by Babaev, but Babitsky is now ready to raise money independently to move the company from the pilot facility stage (where 15 tons of food waste are processed daily) to industrial-scale operations in Israel, North America and Eastern Europe (where production would be increased tenfold).

Entoprotech is not the only company focused on the black soldier fly. Other players include Protix and InnnovaFeed.

Entoprotech’s key differentiation is its ability to use the larvae to process a variety of waste products, some of which are difficult to process by other methods.

“The right combinations allow us to cater for the environment and to get a fantastic result business-wise,” Babitsky said.

The company’s biggest competition comes from methods of breaking down organic waste through anaerobic digestion —that’s where bacteria eat the waste and produce gas to generate electricity.

Rather than turn waste into energy, Entoprotechturns waste into protein.

Meet The Fly That Could Help Save The Planet appeared first on Israel21C.