The report said the pandemic is threatening Asia and the Pacific's progress under the Sustainable Development Goals.
By Zenger News Desk August 24, 2021
Facebook
Twitter
Linkedin
Email 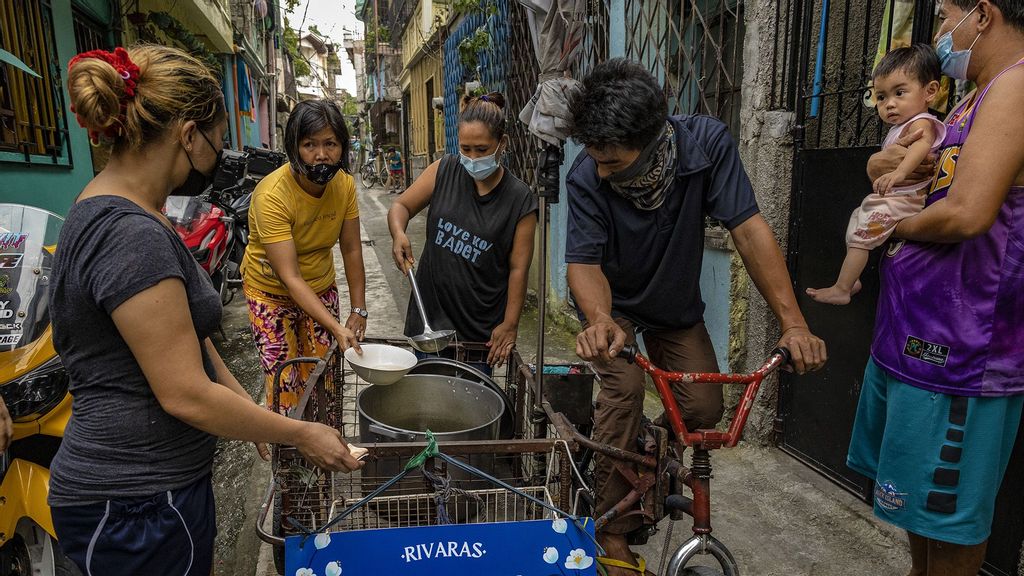 Volunteers use a pedicab to go door-to-door to give residents free chicken soup prepared in a community kitchen, at a slum area on Aug. 12, 2021 in Marikina, Metro Manila, Philippines. (Ezra Acayan/Getty Images)

MANILA, Philippines — The coronavirus disease (Covid-19) pandemic has pushed an estimated 75 million to 80 million more people in developing Asia into extreme poverty as of last year compared with what would have happened without Covid-19, as per a new report by the Asian Development Bank released on Aug. 24.

“Assuming that the pandemic has increased inequality, the relative rise in extreme poverty — defined as living on less than $1.90 a day — maybe even greater,” the report said.

“Progress has also stalled in areas such as hunger, health, and education where earlier achievements across the region had been significant, albeit uneven.”

As per the report, key indicators present comprehensive economic, financial, social, and environmental statistics for Asian Development Bank’s 49 regional members. About 203 million people, or 5.2 percent of developing Asia’s population, lived in extreme poverty as of 2017.

“As poverty has declined, the proportion of people in higher income brackets has increased,” the report said.

“This is particularly noteworthy among those living on between $5.50 and $15.00 a day, with the latest estimates showing that more than one in every three people from developing Asia was in this income group, a more than sevenfold increase since 1990.”

Without Covid-19, that number would have declined to an estimated 2.6 percent in 2020.

“Asia and the Pacific have made impressive strides, but Covid-19 has revealed social and economic fault lines that may weaken the region’s sustainable and inclusive development,” said Yasuyuki Sawada, Chief Economist at Asian Development Bank, in a statement.

“To achieve the 2030 Sustainable Development Goals, decision-makers need to harness high-quality and timely data as a guide for actions to ensure that the recovery leaves no one behind — especially the poor and vulnerable.”

In recent years, Asia and the Pacific’s economy has thrived and contributed as much as 35 percent to global gross domestic product (GDP) in current US dollars in 2019.

But Covid-19 took a toll just when weaker domestic investment and slowing global trade and economic activity were starting to challenge this momentum.

Among reporting economies in Asia and the Pacific, only about one in four posted GDP growth last year. The region lost about 8 percent of work hours due to mobility restrictions, affecting poorer households and workers in the informal economy.

The key indicators report includes a special supplement introducing a practical framework for measuring the digital economy and its growing role in modern life, particularly during the Covid-19 pandemic.