Aerosols From Vaping Impact Health, Just Like Tobacco And Cannabis

Despite claims that e-cigarettes are a safe alternative, a new study examines their damage to users.
By Martin M Barillas August 24, 2021
Facebook
Twitter
Linkedin
Email 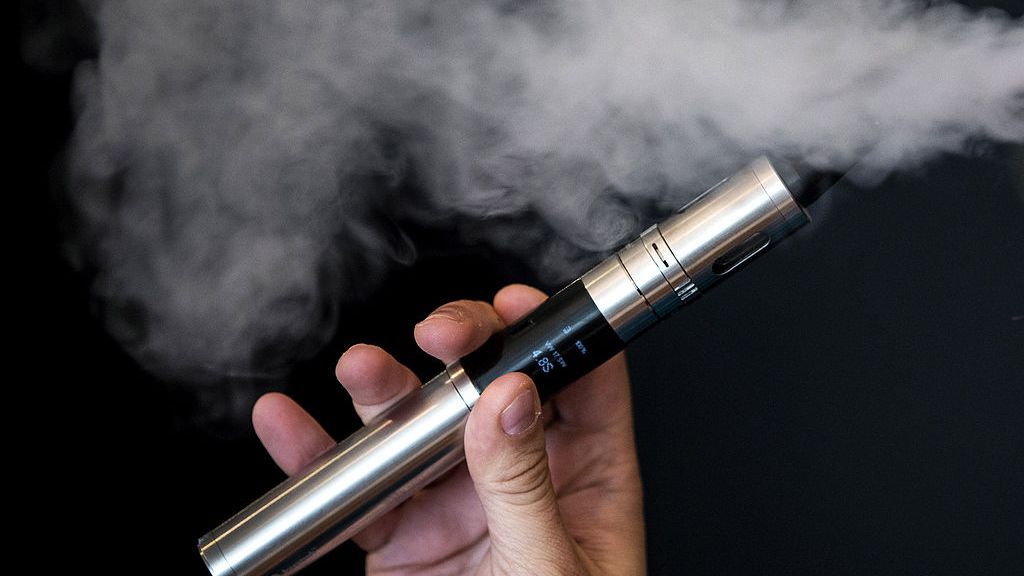 A Vape Lab employee uses an e-cigarette on Aug. 27, 2014, in London, England. Aerosols produced by e-cigarettes impair the function of blood vessels, according to a recent study by the American Heart Association. (Dan Kitwood/Getty Images)

While vaping is often seen as being a less harmful alternative to smoking, new research shows e-cigarettes spew aerosols, particles or mist that affect cardiovascular function, just like traditional smoking.

Aerosols produced by e-cigarettes impair the function of blood vessels, according to a study by the American Heart Association. E-cigarettes contain a cartridge bearing a nicotine-laced liquid that is made into an aerosol inhaled by the user, just like a cigarette containing tobacco or marijuana.

“When you inhale a suspension of particles or a mist, whether it is from tobacco or marijuana, whether it’s smoke or aerosol, it all has the same effect,” said professor Matthew L. Springer of the University of California-San Francisco School of Medicine and senior author of the study.

“Our research reinforces the previous findings that vaping is not without harm, and it underscores the importance of counseling patients about the risks of vaping because it does affect cardiovascular function,” he said.

Knowledge is still limited about the health effects of e-cigarettes, as well as the effects of heated tobacco products and the new, coil-less, ultrasonic vaping devices on cardiovascular function. However, a 2020 study published in Adolescent Health underscored that vape-smokers are particularly vulnerable to COVID-19. Approximately one-third of young adults in the United States may be at risk, especially if they smoke or vape.

The study was carried out on animal subjects, Springer said, but remains applicable to humans.

“The approach we used to study vascular function in the rats closely resembles what happens in humans,” he said. “This is a rodent-equivalent of a common clinical measure in humans in the brachial artery, the major blood vessel of the (upper) arm. It is known that e-cigarettes can impair vascular function in humans. If any mist or aerosol that rats inhale has this adverse effect, it will likely happen in humans, too.”

Combustible cigarette smoke and clean air were the controls for the study, which was presented at the American Heart Association’s Basic Cardiovascular Science Scientific Sessions that was held virtually.

The study examined the effects of aerosols produced by a variety of vaping devices, flavors, and nicotine amounts, on the function of the endothelium: the thin interior membrane of the heart and blood vessels. The layer of endothelial cells produces substances that help control blood clotting, blood pressure levels and immune function, keeping blood vessels healthy.

When endothelial function is reduced, it usually precedes atherosclerosis or hardening of the arteries, which is an accumulation of fatty material on arteries that can lead to strokes and heart attacks. Flow-mediated dilation, which is an indicator of endothelial function and overall blood vessel health, was measured by ultrasound in the lab rats.

After only one five-minute session of exposure, endothelial function was acutely impaired by aerosols from all vaping products tested. Vessel dilation fell between 40 percent and 67 percent for all groups except the rats exposed to clean air.  Blood vessel impairment in vaping products was comparable to the impairment caused by traditional cigarettes (67 percent), the authors said.

“We were not surprised when we saw the results for the heated tobacco products and previous generation e-cigarettes. However, we were somewhat surprised to discover that the new ultrasonic vaping device also impaired flow-mediated dilation,” said lead author Dr. Poonam Rao of UC San Francisco.

“This new ultrasonic device has no heating coil, so theoretically it should be safer than e-cigarettes. Yet even without the intense heating of the nicotine substance, this aerosol impaired vascular function like all of the other products,” he said.