VIDEO: Shelfie Anyone? Giant Crab That Became A Celeb Influencer Returns To The Sea 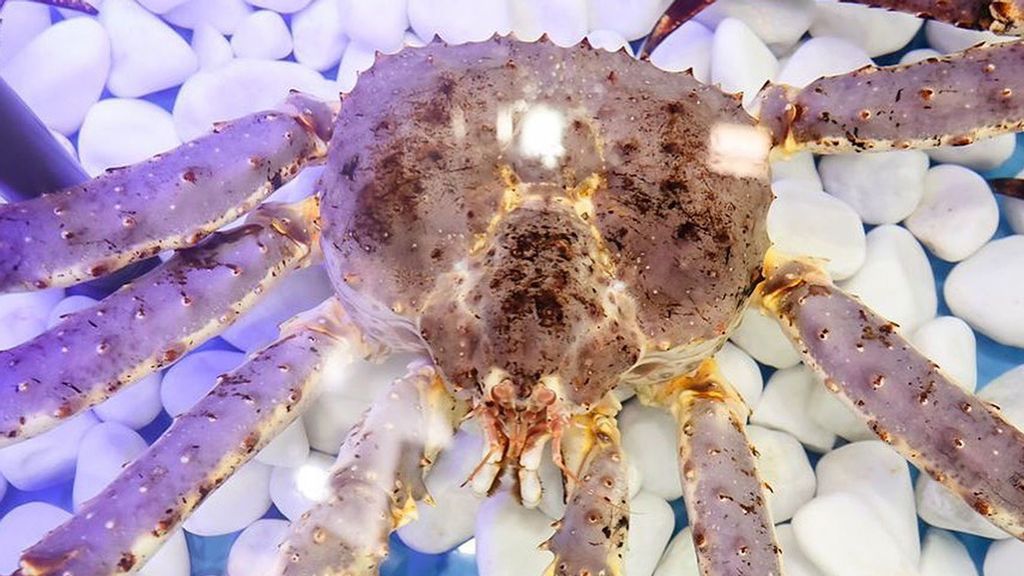 Giant crab Yura, the unofficial symbol of the Saint Petersburg International Economic Forum 2021, has been released into the Barents Sea. (@yura_the_crab/Zenger)

Yura, a giant crab turned social-media influencer, has been returned to the sea.

The celebrity crab has been traveling to business conferences and festivals across Russia, where guests snapped photos, saying the crab would bring them good luck. After promoting its home region of Murmansk at the Saint Petersburg Economic Forum, Yura “announced” it was heading back to the sea.

The crab was on display in an aquarium, plugging “the riches of the Arctic.”

A video on the crab’s social-media account shows Yura being loaded onto a boat on the shore of the Barents Sea. Yura is then ferried out to sea and released. The footage shows a man putting the crab into the water, where it is seen slowly sinking into the depths.

After Yura’s success at the economic forum, his newly found fame was used to promote a local event near the village of Teriberka, where he was caught in June.

While red king crab (Paralithodes camtschaticus) — also known as Alaskan king crab and Kamchatka king crab — are common in the area, it is unclear whether Yura is a member of this subspecies. His career as a promoter ended in Teriberka.

King crabs can have a leg span of 5.9 feet and weigh up to 24 pounds. They are sought after for their meat and are considered a delicacy.

There are concerns regarding their waning population in the north Pacific, after restrictive fishing measures in the last decades of the 20th century failed to curb a decline in their numbers.

In the United States, the red king crab is sustainably managed. Only male crabs of a certain size may be harvested, and fishing is not allowed during mating and molting periods, according to the National Oceanic And Atmospheric Administration/U.S. Department Of Commerce.

Other crab populations are also in danger.

The blue crab population has fallen to near record lows. Scientists cite pollution and overfishing as the primary reasons, especially of female blue crabs, according to the Chesapeake Bay Foundation. The female spawning stock is healthy, but the number of juvenile crabs dropped and total populations declined 30 percent, the latest winter dredge survey by Virginia and Maryland Bay scientists shows.

«Previous Post
VIDEO: Freesy Does It: How A Novice Became One Of The Best Free Divers In The World»Next Post
VIDEO: Fjord Explorer: Adventurer Aims To Scoot More Than 800 Miles Around Iceland