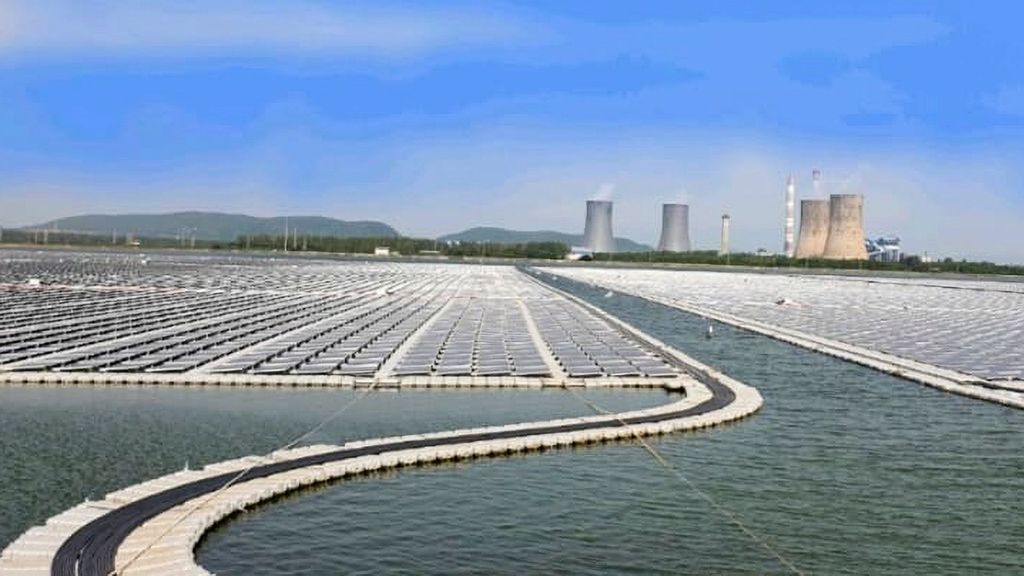 The National Thermal Power Corporation (NTPC ) Ltd, has commissioned the largest floating solar PV project of 25MW on the reservoir of its Simhadri thermal station in Andhra Pradesh's Visakhapatnam. (Ministry of Power, @MinOfPower/Twitter)

NEW DELHI — The largest floating solar photovoltaic project of 25 megawatts on the reservoir of the Simhadri thermal station in the southern Indian state’s Andhra Pradesh, Visakhapatnam, has been commissioned by the National Thermal Power Corporation.

As per the press statement from the Ministry of power on Aug. 21, this is also the first solar project to be set up under the Flexibilization Scheme, notified by Centre Government in 2018.

“The floating solar installation, which has a unique anchoring design, is spread over 75 acres in an RW reservoir,” said the Ministry in the release.

“This floating solar project has the potential to generate electricity from more than 1 lakh solar photovoltaic modules. This would help light around 7,000 households and ensure at least 46,000 tons of CO2e are kept at arm’s length every year during the lifespan of this project. The project is also expected to save 1,364 million liters of water per annum. This would be adequate to meet the yearly water requirements of 6,700 households.”

The 2000 megawatt coal-based Simhadri Station is the first power project to implement an open sea intake from the Bay of Bengal, functional for more than 20 years.

National Thermal Power Corporation Limited is also planning to set up a hydrogen-based micro-grid system on a pilot basis at Simhadri.

“With a total installed capacity of 66900 MW, National Thermal Power Corporation Limited Group has 71 Power stations including 29 Renewable projects,” said the Ministry in the statement.

The group has over 17 GW of capacity under construction, including 5 gigawatts of renewable energy projects. Uninterrupted supply of electricity through environment-friendly energy projects at affordable prices has been the hallmark of National Thermal Power Corporation Limited, it further added.